Shadows of Greatness: How Tim Burton and Johnny Depp Lost Their Way 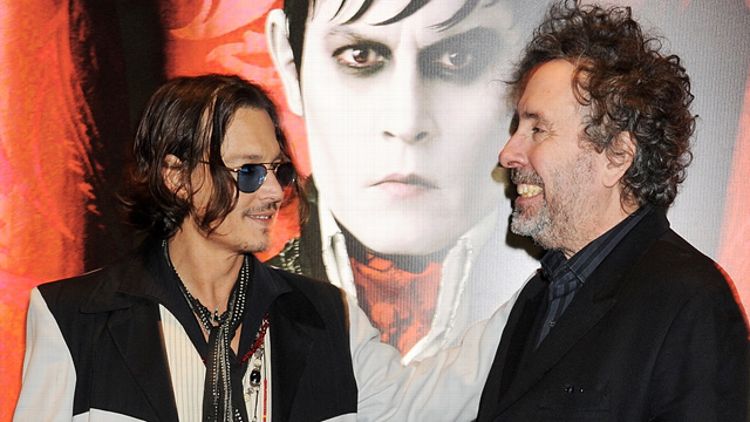 This Friday, Tim Burton’s Dark Shadows will open at every single theater near you. Johnny Depp stars as Barnabas Collins, a vampire from the 18th century who returns from the grave to meet his descendants living in the early 1970s. I haven’t seen Dark Shadows, but I know (from commercials airing wall-to-wall during the NBA playoffs) that there’s a not-terribly-funny scene where Depp stares quizzically at the TV as The Carpenters perform “Top of the World.” I assume there are other scenarios playing on the culture shock experienced by the immortal undead during the Nixon administration, so if that’s your thing, enjoy. It also helps if you are still buying what Burton and Depp are selling, as they’ve been selling the same thing for quite a while.

Dark Shadows is Burton’s fifth consecutive film with Depp, and his eighth overall. It is the fourth film from this recent run (the exception being 2005’s animated Corpse Bride) that is a remake or adaptation. (Dark Shadows is based on a soap opera that aired on ABC from 1966 to ’71.) Also in keeping with recent Burton/Depp tradition, it’s a comic period piece with the requisite “dark overtones.” These guys never met an Edwardian jacket or pair of bushy sideburns they didn’t want to put on and give a sinister twist.

In terms of commerce, the partnership is stronger than ever: 2010’s Alice in Wonderland grossed $334 million — Burton’s best tally ever, or about $80 million more than the movie you’d think was his most successful, 1989’s Batman. Alice in Wonderland might also be the least watchable movie Burton and Depp have yet made together. I won’t go so far as to call it unwatchable, but it sure makes the prospect of watching future Burton/Depp films a lot less enticing.

Creatively speaking, the union of Burton and Depp has become the worst kind of marriage: They don’t seem to have anything new to say to each other. In the last decade, Burton/Depp movies have become bigger (while delivering less), grander (though only in the lumbering sense), and way more ridiculous (and yet somehow also way less fun). In Alice, Depp “re-imagined” the Mad Hatter as a flamboyant, Bozo-haired hobo in the middle of the most expensive and sorta boring acid trip of all time. (Tom Petty probably spent 1/10,000th of Alice‘s budget for the “Don’t Come Around Here No More” video, and yet his Mad Hatter — and his drugs — are noticeably superior.) In Sweeney Todd: The Demon Barber of Fleet Street, Depp slit more throats than then the Geto Boys in “Mind of a Lunatic,” but Burton failed to put any emotional guts into the sour musical. (Depp, however, did somehow manage an Oscar nomination for Best Actor.) The curiously inessential Charlie and the Chocolate Factory is actually better than you probably remember, but you probably don’t remember it.

In the beginning, it was different. Tim Burton was the boy genius specializing in lightly subversive entertainments like Pee-Wee’s Big Adventure and Beetlejuice. He was strange, witty, and kitschy — qualities that were seriously lacking back in the staid, Driving Miss Daisy days of late-’80s Hollywood cinema. With Batman, Burton was given the keys to a guaranteed blockbuster, and yet he nearly steered it off a batshit cliff due to the sheer perversity of casting Michael Keaton and L.A. Forum–period Jack Nicholson for the cokehead-iest superhero flick ever conceived.

But Batman didn’t go over the cliff. It grossed a quarter of a billion dollars and put the spandex-clad Keaton on the bedroom wall of every kid ages 8 to 14. Batman allowed Burton to make his next project, Edward Scissorhands, his most personal yet. He was even more daring/batty with his choice of leading man this time around, forgoing sure things like Tom Cruise and Tom Hanks in favor of the TV actor with the Meryl Streep cheekbones who honed his acting chops opposite future Night at the Roxbury running gag Richard Grieco.

This is what people always forget about Johnny Depp: He used to be Zac Efron. He was 27 when Edward Scissorhands was released — not necessarily old, but getting close to the age where people get over your looks and wonder if there’s something else there. Depp fought Freddy Krueger in A Nightmare on Elm Street and the Vietcong in Platoon — who could’ve guessed that the former would be remembered more fondly by movie buffs a generation later? — before John Waters corrupted his teen-idol image in 1990’s Cry-Baby. But it was Edward Scissorhands that would most influence the future course of Depp’s career, not only because of the connection he forged with Burton, but also for how it made weird a part of his movie-star DNA.

Weird was Burton’s franchise, and Depp was wise to recognize that a little of what the director had, plus his pretty face and charisma, could carry him far. On paper, the director and actor seemed to be opposites — Depp the beautiful lightweight, Burton the respected goth-king — but they bonded over the central conceit of Scissorhands: a fragile man physically incapable of intimacy who is finally recognized as the great artist and thinking-woman’s heartthrob that he truly is. It was like the captain of the football team and the nerdiest kid in school realizing they were equally obsessed with Disintegration.

As a precursor to grunge’s takeover of mainstream rock the following year, Edward Scissorhands helped to usher in a new era. Thanks to Burton, the ’80s were so over that Anthony Michael Hall was now being hired to play the musclebound heel. And Depp proved to be a perfect fit for these new times, with his Vedder-esque handsomeness and his Cobain-like leanings toward dark humor and the grotesque. Four years later, Burton cast Depp as another Ed who was misunderstood by the straights, in Ed Wood. And, once again, Burton and Depp struck a balance between oddball comedy and heartfelt drama deriving from a platonic love story between outsiders. (Though it should be noted that, unlike with Winona Ryder in Scissorhands, there’s no evidence that Depp hooked up with his sexy Ed Wood co-star Martin Landau.)

The evolution of Burton and Depp as a cinematic entity shares some similarities with perhaps the most legendary director/actor pairing ever. A little over 50 years before Edward Scissorhands, a cigar-chewing Irishman named John Ford strong-armed the suits into letting him use a handsome B-movie journeyman actor named John Wayne as the star of 1939’s Stagecoach. The film made Wayne a star, and established his screen persona as the pillar of all-American strength and our nation’s suppressed vulnerability. Wayne had worn cowboy hats onscreen many times before, but Ford was the one who made this image poetic and, ultimately, iconic.

Over the next 25 years, Ford and Wayne made 13 more films together, including two of the best of either man’s career, 1949’s She Wore a Yellow Ribbon and 1956’s The Searchers. Over time the balance of power shifted as their work grew progressively darker and more reflective. By the time of their last film together, 1962’s The Man Who Shot Liberty Valance, Wayne was one of the world’s biggest box office draws, while Ford was nearing the end of his career.

Ford might’ve made Wayne the ultimate personification of an idealized American West, but Wayne was not tied to Ford as his star rose. He was able to take the larger-than-life image Ford made for him and put it to use for other filmmakers, particularly Ford’s rival Howard Hawks in Red River and my favorite John Wayne movie, Rio Bravo (along with Rio Bravo’s lesser remakes El Dorado and Rio Lobo). After a while, unless you were a hard-core cinephile on the level of Peter Bogdanovich or Michael Bolton, it didn’t matter if Ford were directing the picture or not, so long as people still wanted to see a dusty John Wayne stand tale against a breathtakingly spare backdrop in Arizona.

Tim Burton single-handedly invented the surefire box office formula of dressing up Johnny Depp in fanciful clothes and letting him unleash his inner freak. In their early films together, the clothes were less fanciful and the freakiness more controlled. But once the Pirates of the Caribbean movies made Depp the richest actor to ever imitate a smacked-out Keith Richards waving a saber, he became the marquee name on the duo’s projects. Burton’s weird is now Depp’s weird. And as that change has taken hold, so has Burton’s willingness to “let Johnny be Johnny” and give in to spectacle that goes with it. Alice in Wonderland wasn’t a hit because of the unique mix of low-budget go-getterism, mainstream-skewering irreverence, and shy-eyed sweetness Burton once brought to his films. It landed among the highest-grossing movies ever because it starred Captain Jack Sparrow.

Burton is now just one director among a crowded field of Hollywood hired hands trying to harness Depp’s ability to make a mint out of his wardrobe-and-makeup free-for-alls. (As suggested by the publicity stills of Depp’s bizarre spin on Tonto from the summer of 2013’s tentpole-to-be The Lone Ranger, he is capable of being just as sartorially convoluted on his own as he is with Burton.)

If Shadows doesn’t seem especially momentous considering it comes from one of cinema’s most popular team-ups, perhaps it’s because what Burton and Depp do no longer seems unique to just Burton and Depp. You can tell Dark Shadows is a Tim Burton movie because Johnny Depp has pale skin, dark circles around his eyes, and a funny-sounding voice. You can tell Depp is playing a vampire this time because he also has pointy teeth. But Burton and Depp’s creative relationship has turned vampiric in real life, too, and this has diluted their once-singular personality strain across multiple films at the multiplex.