Seth Rogen and Will Reiser on 50/50: ‘We Initially Thought of Doing a Parody of The Bucket List called The Fuck It List’ 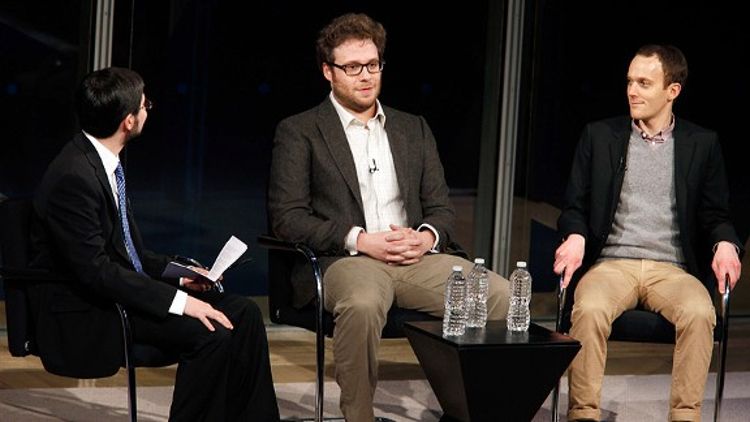 Last night, the New York Times Arts & Leisure Weekend event series came to a close with a conversation between Seth Rogen and screenwriter Will Reiser. The two collaborated on the cancer comedy 50/50, but go back a little ways farther than that. About a year after they became friends, while working on Da Ali G Show, Reiser, at 25 years old, was diagnosed with cancer. Rogen helped his pal through the experience, and eventually encouraged him to write a script inspired by the events. He produced the movie and also co-stars as Kyle, a character Reiser based on Seth. Their chat, moderated by the Times’ Dave Itzkoff, moved from the real life events behind the movie to the production itself. A few highlights:

Rogen: “We had a hard time talking about how scary it was. We joked around. That was our coping mechanism. In the movie, the guys try to get laid. We would sit in our apartment and smoke weed and think about what funny movies we could turn into a young guy having cancer.”
Reiser: “We initially thought of doing a parody of The Bucket List that we would call The Fuck It List.”
Rogen: “Instead of them going to like India and racing Mustangs they would, like, try heroin and, like, go to Thailand and kill someone, or some shit. Play Russian Roulette or something. A real fucked up version of The Bucket List.”
Reiser: “And then get out of every situation using the cancer card.”
Rogen: “Exactly. We thought he would literally have a cancer card. [Mimes swiping a credit card]. Which is not a bad movie idea altogether.”

Rogen: “I remember after his surgery, we used his cancer to skip the line opening weekend at Batman Begins. That was something.”
Reiser: “There was a very long line…”
Rogen: “Very long line. As you can imagine. It was Batman Begins!”
Reiser: “It was opening weekend… we would have to stand like for over an hour. And I had just had my surgery, and I had this ridiculous back brace, and I couldn’t really walk very well, and I looked kind of pathetic. And Seth went up to the cashier at the ticket booth and said, ‘My buddy can’t stand in this line. He had cancer, he just had surgery.’ And then I lifted up my shirt, I showed them this brace. And they were like ‘Okay! Alright! Whatever! Come inside!’”

Reiser: “[50/50] was inspired by the fact that there were all these absurd things that would happen to me. Things doctors would say to me, encounters I would have with friends, family members. There was just so much dysfunction. We were at a party and people were just not acting normal. And it was really funny to us that no one could talk to me normally. It was [hushed voice], ‘Hi! How are you?’”
Rogen: “A lot of touching. And rubbing”
Reiser: “They just do this [rubs Rogen’s shoulder] a lot. Awww.”
Rogen: “Tilted heads.”
Reiser: “And we just went off and were standing in the corner and said, there’s no movie that’s about guys our age that represents what it’s like to go through it like this. Movies about cancer are typically about middle aged individuals who are really disconnected from their family and over the course of the movie they reconnect, and then the person dies. And that wasn’t what my experience was like. We had a sense of humor.”
Rogen: “We were like, what if they made a movie where someone has cancer … and has a sense of humor? That was kind of it.”

Rogen: “It was at a moment in our career that has since kind of gone past a little bit when we were like really awesome. And could kind of get anything made really easily. In terms of our momentum. Now it’s really hard for us to get shit made. Then it was really easy.”
Reiser: “That’s cause we made a cancer comedy.”
Rogen: “Exactly.”

Rogen: “There was a lot of questions about how much do you make it seem like it’s about a guy with cancer? How… for lack of a better word, how cancer-y do you make the title? Our goal was to come up with a title that wasn’t horribly repellant to an audience.”
Reiser: “It was either going to be 50/50, or Tumor Has It.”
Rogen: “Hairless In Seattle. But that’s potentially repellant to an audience.”
Reiser: “Cancer Face.”
Rogen: “The Adventures of Cancer Face. It was called I’m With Cancer for a long time.”
Reiser: “And then it was just called Untitled Cancer Comedy… People would walk by our set like, Untitled Cancer Comedy? That doesn’t sound … good.”