Seth MacFarlane’s Oscar Promos: ‘That’s Not How You Spell Douche’ 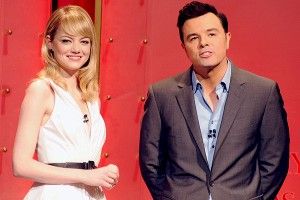 Not that it was going to take much for anyone to panic about this year’s Oscars anyway, but after Seth MacFarlane hammed it up like a monkey riding a bicycle Thursday morning while announcing the nominees, the question is now paramount on the minds of the masses — on February 24, when the Academy Awards air, are we in for a SethMacFarlanepocalypse of awkwardness? (The question probably isn’t phrased as clumsily as that. But you get the gist.)

Well, now we have MacFarlane’s Oscar promos to … totally and completely assuage us of all concerns and fears?! No, no, of course not. But there is promise here — namely, in the two bits where MacFarlane makes fun of himself. First self-deprecating promo: He checks Twitter for Oscar-related activity about himself, then drops a “That’s not how you spell douche.” Second self-deprecating promo: “Many of you are wondering why I’m hosting the Oscars …” followed by an uneasy silence. Hey, two out of five — not bad! (That’s 40 percent. If the actual telecast is 40 percent entertaining, you’ll find me doing backflips down the West Side Highway.) And I think we’ve actually learned something important here: During the live show, when everything’s going a mile a minute, and all direction and purpose seem to be quickly slipping away, all Seth MacFarlane has to do to regain control is take a deep breath, look square into that camera, and make fun of Seth MacFarlane.

Grantland Reality Fantasy League: One Rose to Rule Them All