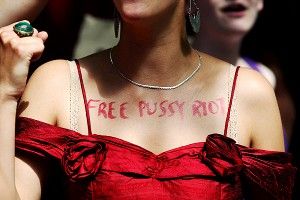 In February of this year, the Russian punk band Pussy Riot — 24-year-old Maria Alyokhina, 22-year-old Nadezhda Tolokonnikova, and 29-year-old Yekaterina Samutsevich — staged a performance/protest at Moscow’s Christ the Saviour Cathedral, in which they recited a “punk prayer” featuring the lines, “Virgin Mary, Put Putin Away.” (You can see the performance here.) They were arrested and charged with hooliganism, and during their months-long trial, they faced a sentence of up to three years in prison. During that time, they became a cause célèbre, with everyone from Paul McCartney to Madonna to Alicia Silverstone weighing in with their support. (The former Miss Match star was particularly concerned with Pussy Riot’s diet: “Dear President Putin … may I please have your assurance that Ms. Alekhina will have access to vegan foods?”) And Kathleen Hanna, the original riot grrrl, has just spoken at length to Pitchfork about her support for the embattled punk-rock feminists. Of course, this being a different country and all, the Russians don’t see it as a clear-cut case in defense of free speech. As GQ Russia editor-in-chief Michael Idov explains in a New York Times op-ed:

The Pussy Riot trial is … unfolding amid universal disregard for the letter of the law. A case that should pivot on a specific legal question (“Does a violation of church protocol rise to the level of religious hatred?”) instead hangs entirely on emotions, including those of Patriarch Kirill I and President Vladimir V. Putin, that the judge and the prosecution appear to be trying to divine. The debate about the trial has also been full of pointless syllogisms: What if it was your daughter up there? What if they tried doing this in a mosque? What if someone came into your house and defecated on the carpet? … Pussy Riot is the flash point where logic and law run head-on into the old-school Russian “nadryv” — a kind of plaintive hysteria that grips the culture every so often.

Of course, if the defendants decided to convey over-the-top remorse (by falling to their knees, crying, etc.), then public opinion and even their legal fortunes would almost certainly turn. But Ms. Alyokhina, Ms. Samutsevich and Ms. Tolokonnikova remain cool, smiling and remote — a “Western” and “unfeminine” attitude. When you’re a woman in Russia, nothing but tears will do.

Anyway. So. On Friday, the verdict in the Pussy Riot case was handed down, and they were declared guilty and sentenced to two years in prison. Judge Marina Syrova declared that the band “crudely undermined social order,” which their supporters are now responding to by undermining social order: BBC News reports that “a number of protesters had been arrested, including ex-world chess champion Garry Kasparov and opposition politician Sergei Udaltsov. There were also pro-Pussy Riot protests in Paris, where demonstrators in Igor Stravinsky square chanted ‘Freedom,’ and in Kiev, where women protesters sawed down a wooden cross in a central square.” You can maybe expect more of this kind of thing?