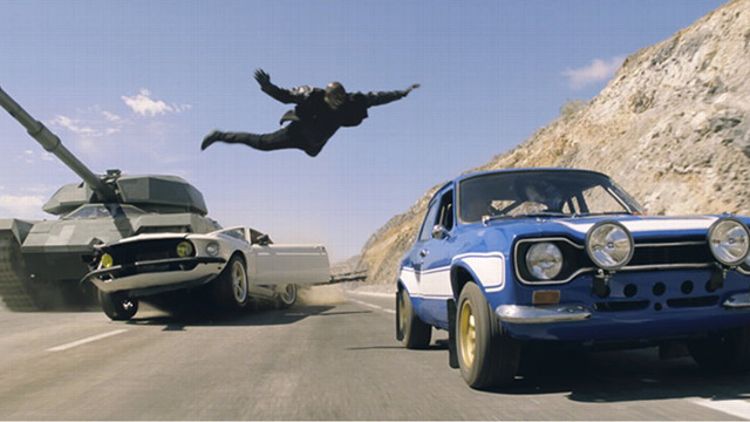 February 5 is now a holiday. In less than an hour this morning, we learned Gus Johnson is calling the 2018 World Cup, Keith Law’s annual list of the top 100 minor leaguers was released (LEAGUE OF DORKS ALERT!!!!!!!) and the extended Fast & Furious 6 trailer surfaced on YouTube. Everybody go home. Just go home. But before you do, let’s break down the trailer for the sixth installment of the greatest action franchise of all time.

0:02 “The following preview has been approved for APPROPRIATE AUDIENCES.” I’m woozy.

0:05 It’s sweeping-helicopter-shot time. IN!!! If there were a Sweeping Helicopter Shots Olympics for directors, I’d have Justin Lin as a -240 favorite over Ben Affleck in the finals.

0:08 Nobody pulls off the “being mounted by a hot blonde immediately followed by strutting outside and looking out to a panoramic ocean view while holding a beer” trailer montage combo better than Vin Diesel. I can’t tell you how much I missed Dom Toretto.

0:11 Send this exchange right to the Oscar committee.

0:35 Our plot: So a team of highly coordinated drivers wiped out a military convoy, leaving the FBI with two choices: send either a team of Seal Team 6 dudes after them, or a top-10 most-wanted felon (Diesel) and a disgraced FBI agent who’s on the lam (Paul Walker) to find them. Obviously, you go with Plan B there.

0:44 Dom doesn’t want to help out — after all, he’s already rich, he’s living in a tropical location and he’s getting mounted by blondes. But wait! Rock drops a bombshell: Dom’s dead girlfriend Letty is alive … and, yup, she was one of the aforementioned “highly coordinated” drivers. She couldn’t be alive! In Fast 4, she perished in a car accident that Dom dissected by studying tire-tread marks for about 12 seconds, after which he somehow found the guy responsible just from the tread marks. She’s alive?

I agree. I mean, we saw the tread marks. Dom’s in.

0:53 Another Vin Diesel staple — he always looks like he’s angrily staring someone down in slow motion even though he’s doing it in real speed. Harder than it looks. I’m trying this every time someone at Grantland disagrees with me.

1:05 I’ll be honest … this trailer has been a little light on Paul Walker, a.k.a. Keanu 2.0. Are they phasing him out? I’m worried. We need Keanu 2.0. Rock is stealing his lines. This is bullshit. Paul Walker is getting Pau Gasoled.

1:15 Our target is Owen Shaw, former spec-op soldier. Got it. Can you show me some cars flipping over and things blowing up, please?

1:31 For the best crew in the world to help out, Paul Walker wants The Rock to guarantee full pardons all the way around. If he doesn’t think that’s getting a dramatic pause from The Rock, he’s nuts.

1:35 Dom: [Mumbling, angry, intense, barely audible.] “That’s the deal … take it or leave it.” Dom Toretto’s character must drive Sly Stallone crazy. I guarantee he watches these movies while thinking, How did I not come up with an action movie franchise centered on a fugitive illegal race-car driver named Dom who mumbles his way through scenes while foiling complicated car-related crimes? I couldn’t have come up with Fast and Furious instead of Cobra????

1:48 Dom sets up our first street race by mumbling, “Ride or die.” Maybe that’s not as profound or inspirational as “I live my life a quarter mile at a time,” but then again, what is? Hey, you know what’s really sad? I’ve seen enough Fast & Furious trailers to know what’s coming next — we’re getting a hip-hop song, we’re getting an action montage, we’re going to see at least one person jump from one car to another at high speed, and if you don’t think a car is flipping over, you’re insane.

No franchise understands exactly what it is quite like Fast & Furious.

2:08 Letty gets out of the car and drops this one on Dom: “Do you believe in ghosts?” How fast do you think Michelle Rodriguez said yes when they offered her a Letty comeback? 0.19 seconds? 0.75 seconds?

2:17 Paul Walker and Keanu Reeves are the Bird and Magic of enjoyably bad acting. The fact that the “tell me about your father” scene from Fast Five isn’t on YouTube is a collective Internet failure. We’ve all failed. I should be able to watch that twice a day. In Fast 6, it looks like their scene figuring out Letty’s comeback might be on that level. I don’t want to jinx it. Just saying it’s possible. But here’s a taste.

Paul: Maybe the lady you knew is gone.
Dom: [Pulling a bullet out of his own body.] You don’t turn your back on family … even when they do.

(Quick tangent: I’ve always loved and admired Dom’s sense of family. The Fast & Furious franchise, to me, really hinges on three things: an appreciation for driving recklessly while causing as much damage as possible, a genuine appreciation for family, and the suspension of disbelief that American law enforcement would never be able to find a bald fugitive who lives lavishly, owns lots of expensive cars, and fully admits to FBI agents that he’s not hiding. It’s totally realistic to me that he would forgive Letty.)

2:30 We just went from two cars on fire that were flipping in midair right to a girl-on-girl fistfight. How many days away is May 24? (Checking.) Fewer than 100 days!

2:45 Great montage here. Includes a car flipping over and going through a glass window, someone jumping forward from one speeding car to another (forward????), The Rock leaping through the air and punching someone at a 45-degree angle, Vin holding an assault rifle while looking intense and … wait, where was Paul Walker? I’m telling you, they’re phasing him out. I’m concerned. They better not replace him in Fast 7 with Chris Pine or something. I won’t handle it well.

3:09 Did we just see the world’s greatest crew drive under a plane that was about to take off, shoot something at it, then drag the plane back down so it crashed behind them? Yes. Yes we did.

3:14 Did Dom then somehow drive his car through the front of the plane? Of course he did.