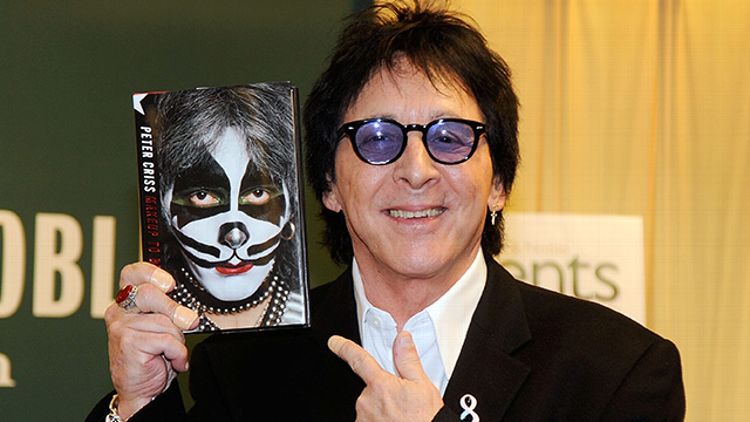 In this installment of Rock Memoir Book Club, we discuss Makeup to Breakup: My Life In and Out of Kiss, by ex-Kiss drummer Peter Criss with Larry “Ratso” Sloman.

Discussion question no. 1: How does this book compare with Peter Criss’s drumming on the first six Kiss albums and that one song on Dynasty?

This is a loaded question, since Eric Carr is my favorite Kiss drummer of all time. (This is based mainly on Creatures of the Night and its ridiculously huge, fake John Bonham drum sound.) But if the question is really “Did you enjoy this book?” then the answer is “Absolutely.” In the previous Rock Memoir Book Club installment, I said that the “obvious truism” of these books is “the more respected a rock star is, the less readable his or her book will be.” The inverse can be applied to Peter Criss: Yes, he’s an original member of Kiss, but outside of getting name-checked in prime-era Weezer songs, he hasn’t exactly been inundated with superlatives in the past 40 years. He’s got, he’s got, he’s got nothin’ to lose by spilling as much dirt as possible in Makeup to Breakup.

While much of Makeup to Breakup is devoted to spectacularly gory character assassination directed at past musical and business associates, the book ultimately is an indictment of Criss himself. Criss is either brutally honest to his own detriment or completely lacking in self-awareness. Either way, it can’t be overstated how big of a dick he makes himself out to be in Makeup to Breakup. Self-pitying, toxically bitter, violently angry, weirdly entitled, and given to rock-star petulance, Criss gives himself a royal hatchet job.

The strangest passage in Makeup to Breakup occurs during Criss’s extended post-Kiss wilderness period, when he hooks up with a former band associate to work on a rock opera called Spotlights and Lonely Nights. An idea so brilliant only self-destruction could derail it, Spotlights and Lonely Nights eventually is waylaid by Criss and his collaborator swan-diving into a valley of coke and Valium. Criss’s commitment to the project finally compels him to pull a gun on his partner in front of Criss’s wife and child:

I confronted Sean. “The only way I can think of getting you to shut the fuck up is to shoot you and bury you in the fucking bushes out there,” I said. With that, I let one off aimed at the ceiling and there was a huge boom. Smoke poured out of the sides of the barrel … Sean ran two miles into town and went into the local police station. He told them that I had gone mad and I was holding my wife and our nanny at bay with a machine gun and grenades. Now the cops were in fear for their lives if they responded, so sure enough they dispatched six cars, filled with SWAT teams, all in total riot gear. They were ready for war.

Don’t worry, this story has a happy ending: The cops put Criss up in a Marriott and later released him. Justice!

Follow-up question: Is Peter Criss secretly the villain of his own autobiography?

Discussion question no. 2: Should we feel sorry for Peter Criss?

Peter Criss would really, really like it if we did. Makeup to Breakup is essentially one long passive-aggressive plea for sympathy, starting with the opening line: “Have you ever tasted the barrel of a .357 Magnum down your throat?” What pushed Criss to this sorta-but-not-really suicide attempt? First off, his ex-wives are horrible. And his ex-bandmates screwed him out of millions. And the music business blackballed him, keeping him from being the superstar he was in Kiss in his solo career. Peter Criss is the kind of guy who will “put on the Eagles’ ‘Desperado’ and play it over and over and over.” Did I mention he is depressed?

Two things seem equally true about Peter Criss’s life: (1) He was a victim of bad judgment, bad advice, and plain old bad luck when it came to love and business, and (2) at least 90 percent of the time, the bad things that happened to Peter Criss can be blamed solely on Peter Criss.

Again, this is the impression you get from Criss’s own book, though admittedly you have to read between the lines. He’s his own unreliable narrator. All the railing Criss does against friends and lovers who cruelly turned against him only succeeds in making him look like a comically monstrous egotist. Most of the time Criss is relatively benign, like when he screams at a road manager, “Do I look like a guy who would eat a burrito?” before throwing said burrito against a wall. Or when he suggests that his current wife is too level-headed to satisfy him in bed. But this is also a serial adulterer who fantasizes about his cheating ex-wife dying in a car accident … while his young daughter sits in the passenger seat. (At another point he wonders aloud: “Should I shoot her or just throw her out the window?”) It’s not difficult to see why Peter Criss was left at the curb by so many people in his life.

Follow-up question: What song most accurately describes Peter Criss: Tom Petty’s “Into the Great Wide Open” or Randy Newman’s “Lonely at the Top”?

Discussion question no. 3: Which member of Kiss does Peter Criss hate the most?

The short answer is Gene Simmons. He refers to him as a “fucking bastard” more than once. He dreams of stabbing him in the neck. And he relates the book’s single most sickening anecdote to describe just how disgusting Simmons is:

I remember one day early in our career when we were rehearsing and Gene and Paul had to share a microphone and Paul suddenly recoiled as if he had been shot. “Holy shit, what the fuck did you eat,” Paul said. “You know what I ate,” Gene said. Then he smiled and you could see the menstrual blood on his teeth. “I didn’t brush my teeth this morning. I want to savor the taste of it all day.”

The more interesting question is: Who does Peter Criss hate the second most in Kiss, because there’s a lot of competition. He accuses Paul Stanley of being a Machiavellian bisexual who stuffs his pants. He implicates Ace Frehley as a two-faced chronic masturbator who betrayed him during the mid-’90s reunion tours by knowingly accepting more money than Criss was paid. He calls Kiss drummer Eric Singer a “schlep.” He says short-lived Kiss guitarist Mark St. John has a weakness for German-made kiddie porn. He has a surprising amount of venom for Kiss flunky and future guitarist Tommy Thayer, whom Criss dismisses as “a piece of shit” and a “fucking punk ass-licker.” Makeup to Breakup amounts to the most vitriolic exit job interview ever.

Follow-up question: What does Gene Simmons’s breath smell like on a good day?

Discussion question no. 4: What is your favorite example of sexual over-sharing in this book?

Third place: “I’ve met a lot of chicks who were wearing my makeup who wanted me to fuck them … I laid her on the bed and my face was staring back at me, except she was naked.”

Second place: “We fucked nine times that night, my all-time record. We fucked everywhere and anywhere in that suite. We even used the bidet. I had no idea what a bidet was.”

First place: “There’s something about a woman spreading her legs with a cello between them that is so hot. When they’re playing their dresses bunch up way over their knees. One woman even played barefoot. I had a perpetual erection looking at those cello girls.”

Discussion question no. 5: What did you learn?

The conventions of the rock memoir require the writer to have a Jake La Motta/Dirk Diggler man-in-the-mirror moment at the end, when all sins are accounted and atoned for. In Makeup to Breakup, Criss does this by devoting a chapter to his spiritual beliefs, “because I have a unique relationship with my maker.” That relationship boils down to this: Peter Criss does what he wants, and then prays about it. “Even when I was on the road with Kiss and having orgies, I’d make sure to say my prayers every night,” he writes. Peter Criss hasn’t been struck by lightning yet, so praying obviously works.

In the next Rock Memoir Book Club: Kenny Rogers’s Luck or Something Like It: A Memoir.