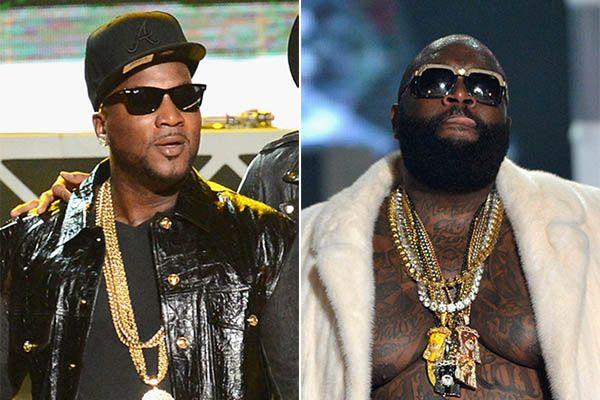 This seems like a sadly appropriate place to start:

Shots fired in parking lot!!! Gunman arrested!!! Back to the show and Club later!!!

The Seventh Annual BET Hip-Hop Awards took place this past Saturday in Atlanta, Georgia. Unlike many awards shows, this event actually gives viewers something to get legitimately excited about, via the Cyphers, a series of groups of three to six rappers that come together to deliver often amazing pretend-freestyles over the same beat.

Over the years, the next-day excitement over these cyphers greatly exceeded the happenings of the actual awards show, partly because of the quality of the raps, but also because it was refreshing to see rappers from different crews and record labels, from different geographical regions and even countries coming together for a highly entertaining three-to-four-minute minute clip. Rappers uniting, joined by a shared love of hip-hop? A far cry from the days of yore when rap awards shows were practically annual venues for people to get into brawls. Oh, those bygone days …

This was the altercation that 44-year-old radio personality Funkmaster Flex was so excitedly tweeting about. On Saturday night, at the BET Hip-Hop Awards, mid-thirties rappers Young Jeezy and Rick Ross (and their various security details and entourages) engaged in some sort of backstage scuffle. In addition to breaking a floor-length mirror, there were allegedly punches thrown and a debatable (not figurative) shot fired.

And then there was this, outside:

What you just watched was a clip of the 33-year-old rapper “Gunplay” (I use quotations with the sole purpose of delegitimizing his existence) of the Rick Ross–led Maybach Music Group imprint beating someone up, and then getting beat up (his attackers/attackees allegedly associated with 50 Cent), and then getting maced in the face.

Even though it isn’t the fault of BET that this teenage behavior among grown men took place (except perhaps for continuing to have the awards in Atlanta, which it pains me to admit has long been a playground for the rich, male, and black to act out of line and get caught), the network came out the following day and released this statement:

“BET Networks works very hard to bring the best in entertainment to the city of Atlanta. For the past 7 years BET has celebrated the true art form of Hip Hop. Due to some misjudgment of select attendees, it is unfortunate that certain incidents took place. BET Networks does not condone any type of violence. Local authorities are working to resolve the situation as quickly as possible. Despite the actions of a few the 2012 BET Hip Hop Awards embodied the true spirit of hip hop and was not impacted at all by any incidents. Tune in on Tuesday, October 9, 8P/7C to watch the 2012 BET Hip Hop Awards.”

Still unclear as to what exactly took place, especially between Ross and Jeezy, DJ Drama (seen in the original backstage video) took to his Saturday radio show and, in a very un–Funkmaster Flex way, actually explained what he saw, calmly, along with some of the unfortunate implications of it.

So that’s what happened. That was my take at “reporting.”

Having said that, the last way I wanted to spend my Monday morning was talking about black entertainers predictably fighting at an event hosted by the Black Entertainment Television channel, in a city once known for its black entertainers and, more recently, as a cesspool of blacks whose sole purpose in life is to entertain by way of foolishness, no matter what channel’s cameras are rolling.

Even though the violent diva squabble between the two rappers was likely very real, the aftershock that it continues to send through my body mirrors that of a chair-throwing, weave-pulling reality-show beef that I’ve grown to believe is fully staged. In both instances, the only emotion it elicits is embarrassment.

One of the ruder things that I think about on a regular basis is how happy I am that Here Comes Honey Boo Boo exists. I’m not proud of harboring these emotions, but it almost brings a joyous tear to my eye knowing that there is a once-poor, obese, uneducated white family that has been put on television for the sole purpose of exploitation and mockery, and that many critics find it “horrifying” that something this repellant would ever be placed on television for all to see.

It sucks, right? I feel your pain, uncomfortable watchers of the Thompson clan, but try watching VH1. Ever. The network makes me want to tell people my name is Sally and I’m a white lady from Cleveland. It’s not right, but I want Honey Boo Boo on TV for 10 seasons, just so it can balance out 20 minutes of Love and Hip Hop: Atlanta.

Even in the case of this highly purposeful, Boo Boo–fueled digression from the rapper spat, it’s unfortunate that by writing anything about the BET Awards melee — even something highly critical — I’m giving Ross and Jeezy what they want and what any pop-culture beef ultimately provides: publicity. As a culture, we’re still stuck in a “bad rewards good” cycle, in which unfortunate actions are instantly rewarded with more attention (and expectations of future unfortunate actions). And it seems like the hole we’re in is getting deeper with each green-lit reality show or club feud.

It’s almost as if reality and staged reality are operating symbiotically, with all parties vying for the ultimate goal of continued relevance. It’s sad that it has come to this point, at which my only optimistic end game is for everyone to eventually become embarrassed, but that’s the only light at the end of the tunnel that I see.