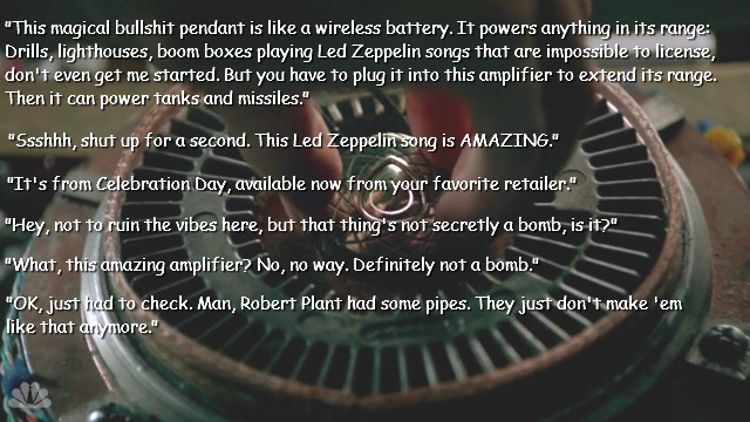 They teased it, and they delivered: “Kashmir” contained not one, but two Led Zeppelin songs. For Zep fans, this was very exciting; the band is so notoriously stingy with the licensing of their music that even listening to any of their songs in iTunes without explicit permission constitutes a copyright violation that could cost you millions of dollars in penalties. Don’t risk it. Place your pendant atop your computer, fire up last night’s Revolution on Hulu, and rock out (in darkness, let’s keep it real) to this pair of classic cuts without fear of reprisal. Even General Monroe likes to get the Led out from time to time. It takes his mind off all the evil things he’s going to do with his bullshit magical electricity amplifier.

As for the rest of the episode: Nine TV-hours in, the gang has still not found Danny. They did, however, trip their collective balls off due to oxygen deprivation. That’s not nothing. And it’s a damn sight better than a steam train, believe it. 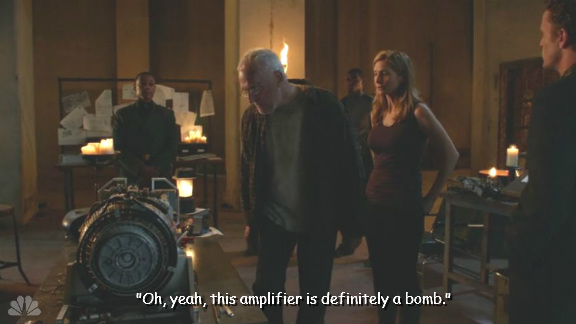 She said it wasn’t a bomb, and then it was totally a bomb! And then she stabbed the only other person who knows how to build a real amplifier, which is a move she stole from Jack on Lost. Tricky lady. 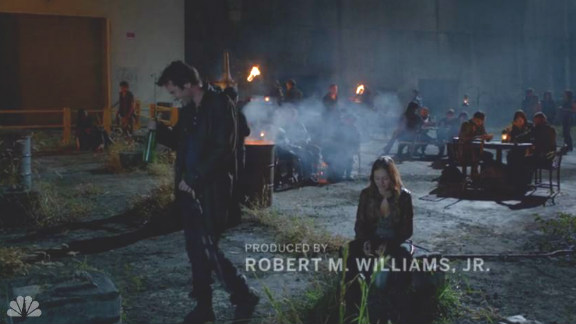 You know what song would have been incredible for a good old fashioned trash-can-fireside bender? Anything by AC/DC. Maybe next week. We’ll check the budget and get back to you. 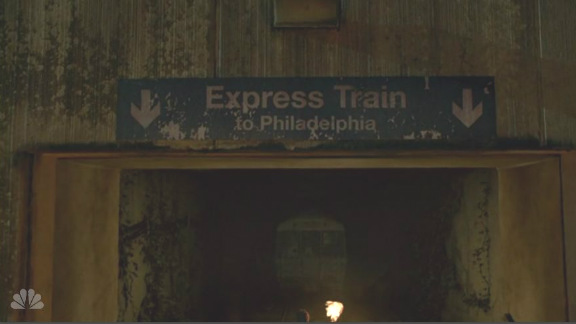 Or that lost brother they’ve been chasing. Or the General. Or a Rocky statue covered in moss. Or a screening of Silver Linings Playbook. 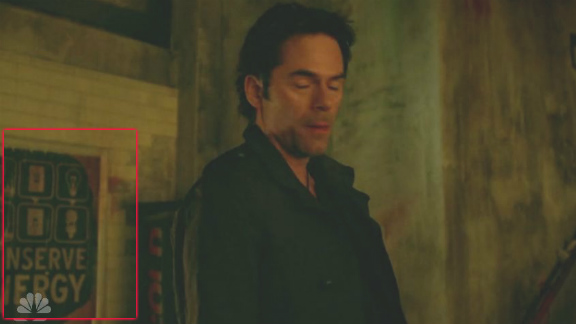 Conserve energy, because you never know when it might go away forever. 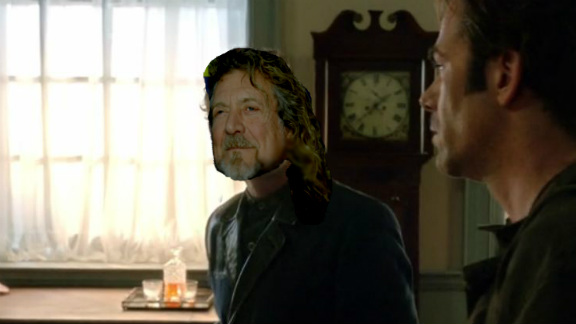 “You’re hallucinating, Miles.”
“I am?”
“You were trapped in a massive subway tunnel system for like five minutes, which is more than enough time to deplete its oxygen supply and induce some very convincing hallucinations. Watch out, alligator attack! Whew, close one.”
“I feel like there would be more than five minutes’ worth of air down there?”
“Don’t be silly, Miles. Otherwise, why would I be here with you in General Monroe’s study, having a lovely time chatting about Celebration Day, our just-released live album?”
“I love you, Robert Plant.”
“I know you do, Miles.”
“Let’s go to sleep forever.”
“No, you have someone’s brother to save. Go, and make no real progress toward that goal, because we have a few more episodes to fill.”
“Right.”
“Oh, and Miles?”
“Yes?”
“Don’t forget to buy Celebration Day.”
“It’s already in my cart. Metaphorically speaking — there’s no power in this hallucination.”
“Say hi to Danny for me, eventually.”
“I will.”
“Another alligator! Watch out!”
“AAAAAAAAHHH! Not cool!”
[Robert Plant snaps his fingers and Miles is transported back to the subway tunnel. He thinks he can hear the faint strains of “Kashmir” somewhere in the distance, but he knows it’s just another imaginary delight conjured by his suffocating brain.] 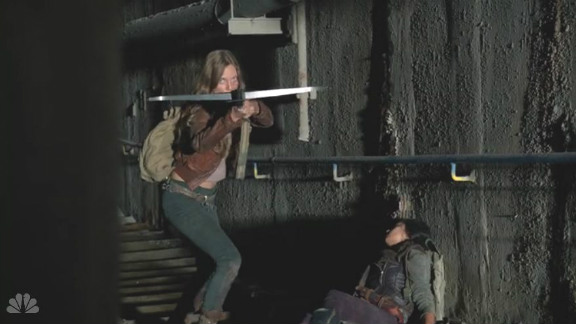 Finally, some crosssboooowwwwwssss! Charlie’s back in the crossbow saddle! And she killed a guy! We love this show again!

Next week: No idea, because the DVR cut off the part where the voice-over guy tells us what’s up, because the show went one minute past its time slot. Thanks for nothing but two astronomically expensive Led Zeppelin songs, NBC.