Requiem for The Killing 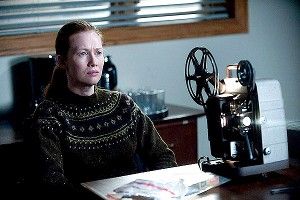 We come here to bury The Killing, not to praise it.

Actually, if we’re being totally honest, we come here to lock The Killing in the trunk of a campaign vehicle, send the show rolling slowly into a lake, unaware of its muffled cries as it tries to claw its way to the freedom of a third season. Maybe we’ll even force it to wear oversize, soggy sweaters, shoot it in the spine, and tearfully demand it reenter the mayoral race after a recovery period that would make Lazarus exhausted, or dispatch it on repeated wild-goose chases to an Indian casino run by seeming thugs with no regard for mainland law enforcement.

We may abandon it and flee to a cheap motel, where we will do the laundry of a troubled urchin who reminds us of it, thinking little about how crazy it would be to leave a grieving family to fend for themselves in their moment of greatest need.

If it makes sense in the moment, we may commit it to a mental institution for a couple of days, because it seems a little too obsessed with solving its own mystery, and we worry that its child is suffering from neglect.

There’s a chance we may shoot it dead in a police station, accuse it of a crime that will ruin its teaching career, or record it while it’s engaging in sexual activities on a filthy mattress in a school basement. We will scour high-end escort service Web presences hoping to purchase its company.

We may submerge it under 15 metric tons of red herrings, hoping it will suffocate under the weight of its own fishy deceptions.

We’ll grudgingly praise the quality of its acting and the beauty of its rain-slicked photography, but then follow that up with a disappointed shake of the head and an expletive-filled tirade about the betrayal we felt when it failed to resolve itself in the implicitly agreed-upon time frame. And when it finally wraps up, we will not be satisfied, because it made us sit through 13 additional hours of absurd twists, which, come the fuck on, that was never going to work out for anybody, that’s the one thing we could all see coming.

We will dump news of these plans late on a Friday, against the Olympic Opening Ceremony, where James Bond just parachuted out of a helicopter with the Queen. Wait, what?

We will eventually end this requiem, which seemed like a good enough idea 20 minutes ago, but has since revealed itself to be tiresome, self-indulgent, and defiantly unconcerned with its audience’s enjoyment as it loses sight of its original premise. (And yes, we see the irony.) But not now.

Filed Under: AMC, The Killing