Rembert Explains the Sitcom Fonts of the ’90s 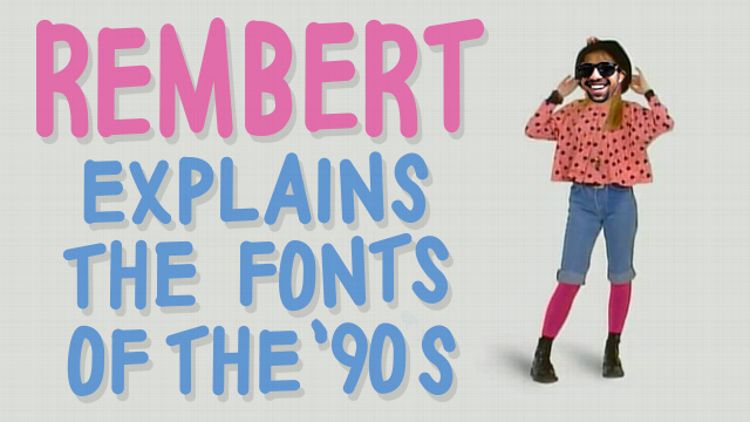 All at once, as soon as the Y2K dust cleared, proving that the human race could truly prevail through anything, certain important funding streams were seemingly drained to zero. Departments were closed (I think), talented people were fired (probably), and dreams were shattered (mine, at least).

Of all the horrible things that have happened in the 13 years since the ’90s drew to a close, there is one criminally overlooked tragedy, one that, if we become too far removed from it, I’m afraid we might forget ever existed:

The extinction of the great sitcom fonts.

There are a few examples of creativity (Community‘s crumpled-up piece of paper, even though it is used as well as this pile of collegiate lettering boringness, and Scrubs for having the courage to incorporate brackets), but on the whole the sitcoms that arose after the ’90s, while often very funny, seemed to not have a single care about drawing in their audience with a masterful font.

The decade, Mariah’s decade, blessed us with many things that we’ll never truly get back. Nineties sitcom fonts are one of those things. It was truly a golden era for edgy, colorful typography.

Let’s discuss the great ones, the 25 greatest sitcom fonts from the 1990s. While it may seem like a competition, know that this is nothing more than a celebration.

“When in doubt, just be as literal as possible.” That must have been in the ’90s sitcom font manual, because on numerous occasions the design of the title mirrored the theme of the show.

As for that metallic finish, it’s phenomenal. Just good stuff all around.

First off, there was a show called Fish Police, and don’t you ever forget it. Secondly, I see this and my first thought isn’t that this is a police show. All that matters is “FISH.”

It’s always a good move when you can substitute a letter for a relevant object from the show. In this case, the o in “California” has been replaced by the sun. I get it, because I’ve been to California and it is often very sunny.

This image puts me at ease. The actors didn’t do that and neither did the script.

Another example of o substitution — this time instead of the sun, a hatching dinosaur egg.

Also, no matter what the actual scale is, they really found a way to make those letters look gigantic. I’m looking at it on my computer screen and it’s only taking up a small portion of my monitor, but somehow the letters still feel 600 feet tall.

If Home Improvement debuted in 2007, the title would probably be written on a line, maybe in cursive if someone was feeling fancy, with a box around it and a hammer in the corner.

That’s what’s wrong with this world we live in.

But this is why the ’90s were amazing. Why would you take the simple route, asketh the ’90s, when you could BUILD A HOUSE ON TOP OF THE WORDS “HOME IMPROVEMENT”?

For years, I tried to write “Rem” in the Ren & Stimpy font. I never figured it out. Because I’m not an artist. And that is art. I learned that hard lesson very young.

It’s a kids’ show, so they made the letters look like Tommy Pickles was head graphic designer. Great move.

It’s hard to go wrong when you fill in letters with swimming pool water and then put the word atop a tsunami wave.

IT IS VERY HARD TO FAIL WHEN YOU DO THIS.

I’m not surprised Ryan Gosling thought this show would kick-start his career. Just look at that wave.

It’s like one of those horrible messaging T-shirts, but it’s not on a T-shirt, which makes it not horrible.

Also, this was a good show. Like ’90s fonts and star Chris Elliott, criminally underappreciated.

I’m not complaining, because it feels right. I just don’t get it.

Even without knowing what Me and the Boys is, you know that it took place between 1990 and 1999. It’s sad that we don’t have the technology to create something this crude and brilliant anymore.

It’s subtle, but I always appreciated how the w in Wayans helped form the a.

Look at those letters. It’s hard to tell what’s going on because they all just look slightly dirty. Like really bad tie-dye jobs. But it’s great and fits with the weirdness of the show.

Side note: THIS IS THE BEST SHOW.

When people ask, “Who are the two cartoon women with whom you’d like to have your last meal?” it’s always Jane from Daria and Angela Anaconda. Without hesitation.

Here’s why this is a classic image. When you title something Homeboys in Outer Space, you can afford to get lazy, because the phrase is that good. It’s doing all the work for you.

This really should be higher. I’m not moving it up, because I don’t feel like it, but let me openly acknowledge that I have made a mistake.

They made a very normal four-letter word look extremely interesting. If I saw that u out in the streets alone at night, I’d go up to it and ask, “are you the u from Doug?”

And she would reply, “Yes, of course I am, Rembert.”

This show, featuring the wonderful Nell Carter, made it five episodes before it was canceled. It really is a shame, not because of the lack of time for character development, but because there were some real artists involved with You Take the Kids.

Just look at what’s going on right there. Four words — THREE YELLOW BOXES. You’ve got a big purple “YOU,” a super flat “take,” “the” inside of a black arrow, and then “kids.”

Just look at what’s happening with those four letters. LOOK AT THAT D. Incredible stuff.

Have you ever sat down and appreciated the six different colors in “Living”? Why are there six? Oh, no reason, except that THERE ARE SIX CAST MEMBERS ON LIVING SINGLE.

Each one got a color. Yes, even Overton got his own color, probably the green i if I had to make a guess.

It’s genius. And look at how they’re all over the place. It’s as if they have life. Or, you know, are LIVING.

8. Saved by the Bell

This image took America from the ’80s to the ’90s. We don’t thank this image, and its creators, enough for that.

7. My Brother and Me

Even though this show is extremely important, the impact of the opening sequence with this image is almost as long-lasting as that of the actual, short-lived show. Maybe not as much as Goo’s punch, but shockingly close.

It’s hard to imagine the names Beavis and Butt-Head drawn any other way. Before even watching the show, it gives you a hint at what lies ahead. Iconic stuff.

5. Clarissa Explains It All

This is the Mona Lisa of Microsoft Paint files.

4. The Fresh Prince of Bel-Air

It’s the juxtaposition of the spray-can Fresh Prince with the calm and collected Bel-Air that makes this work so well. Just like Will flipping his prep-school blazer inside out, and every other trope involving Mr. Smith being wildly out of place but cool enough that he can get away with it.

Let me stop before I write a dissertation about this show. Again.

I wish every letter I drew looked liked a Duckman letter. Yes, shadowing included. We, as Americans, don’t talk about this show enough, and the same goes for those letters and the way they float in midair.

This abstract art piece is as in-your-face as Fran Drescher’s voice. It couldn’t be any other way.

The Martin font should be as widely accepted as Arial. But it’s not, which is a crime. One day it will be, though. I promise.

This is easily the winner. I knew it before I even began this list. It’s the most distinctive, the most memorable, the most creative, and, oddly enough, one of the most simplistic. It’s nothing more than a rectangular bar under all a‘s and a triangle under all o‘s and splashes of color and triangles here and there.

It’s not rocket science, but simultaneously it is the equivalent of ’90s hieroglyphs.