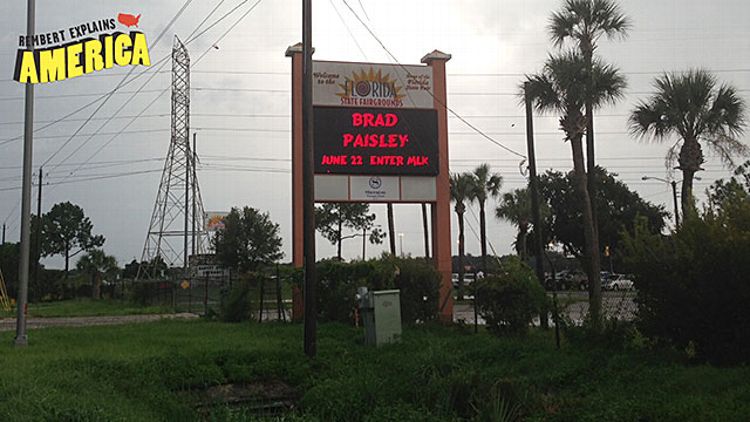 If there was a final chapter to the story, why couldn’t it be in Tampa?

But it all came true. And I had no choice but to hold up my end of the deal: attending this Brad Paisley concert.

It was my third week on the road alone, so the idea of attending a concert solo wasn’t an issue. Neither was the idea of going to my first country music concert. Or having a night out on the town, again alone, in Tampa.

The convergence of the three, however, wasn’t exactly the most thrilling idea. But it was happening, because as these thoughts entered my head, I was already halfway to the venue.

After a few minutes of walking, I began to see the tailgates. And hear the conversations. And then I looked down.

I was wearing my Michelle Obama T-shirt.

It’s always been a double-take worthy shirt, one I wear both out of respect for the Queen and to get compliments. On this occasion, I was sure the double takes would persist; I wasn’t sure I was ready for the Michelle Obama T-shirt triple take. So I turned around, walked back to my hotel room, and changed shirts.

This was a disappointing moment. I felt like I’d let Michelle down. I wasn’t sure if we’d ever recover.

Walking out the door, I looked back: With shame in my heart, I walked back to the Brad Paisley concert. And that theory was quickly confirmed once I got inside. Instantly.

Earlier in the evening, upon acquiring the concert tickets, I sent out an Internet message that I had two extra Paisley tickets. Not because I was in a generous mood, but rather because I wanted support in this moment.

My street cred was at an all-time low. Alone in the middle of Florida, all I wanted was the sun to go down, so I could at least blend in with something.

It would be an hour before sundown, timed with the end of the opening act. So I fielded double takes. None were the slightest bit rude — mostly they were just looks of confusion. Or surprise. The sort of double take any of us would pull if we saw, say, a newborn doing long division or a dolphin walking on its tail while carrying a briefcase.

That type of double take.

I couldn’t even be mad. I was in the reverse situation one week prior, at Atlanta’s Birthday Bash. In the majority power position, I glanced curiously at the white kids with the chutzpah to strut through the venue alone.

Now it was my turn. It was uncomfortable, but I loved it. And I needed it.

As the sun went down, and it was clear Paisley was only minutes away from going onstage, I received an e-mail. Two people wanted to take me up on my tickets offer. The crucial need for protection was all but over, since it was now dusk, but why not listen to some “Accidental Racist” with two new friends?

That was, after all, the real reason I decided to come to this show. That was the aforementioned “final chapter.” After spending a full week earlier in the year discussing the song’s unfortunate attempt at civil rights, I had to see a crowd — a Tampa, Florida, crowd — react to the song. As Paisley marched through his well-received set, I frequently bugged my ticket takers turned neighbors turned friends, wondering at what point he was going to bust out “Accidental Racist,” as well as what would happen to my soul should LL hit the stage and say “Hello, mister white man” to this crowd full of said mister white men.

A full hour later, while impressed by Paisley’s apparent superstardom, I was confused about why he still hadn’t played my song. Was this simply in preparation for a grandiose, equality-driven finale? I sure hoped so. A few songs later, he thanked the crowd and walked off the stage.

Would there be an “Accidental Racist” encore? Oh yes. I knew Tampa + Paisley + tens of thousands of cowboy-hat-and-boot-wearing compatriots wouldn’t let me down. This was going to be incredible.

And then Brad Paisley came back. He performed “Ticks,” and then “Alcohol.” And then it was over. He didn’t even give me the privilege of calling him an accidental racist. That was supposed to be the punch line of this entire story.

Paisley won. He trolled a troll. Ten-gallon hats off to you, sir.