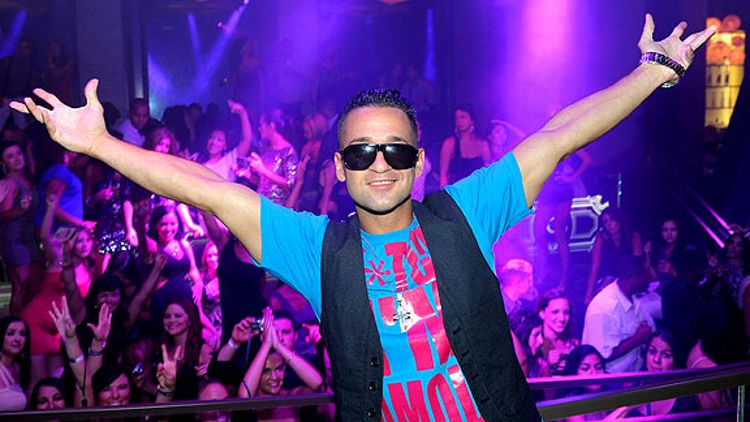 The 2011 Grantland Reality TV Fantasy League is over, ESPN Super Suit Connor Schell won, and we all enjoyed pointing and laughing as we watched reality TV fame-mongers try to find love, try to douse each other in cocktails, try to get sober, try to avoid sobriety at all costs, and more than anything else try to use this thoughtless genre of television to Kardashian themselves into superstars. It was a hoot. If your life isn’t complete until you know who scored what in the Survivor finale, you can find the scoring breakdown at the bottom of this post, you can read fellow Grantlander Tess Lynch recap the shit out of it, or you can look in the mirror, have a frank conversation with yourself, and reprioritize. Your call. Since next Friday I will be crafting a column recapping the year in the GRTFL, I wanted to use this week’s column to look forward to 2012 in the GRTFL. I hope you enjoy looking into the Four Loko-filled crystal ball of reality TV as much as I do. Besides, what else are you going to do between meals and movies while you are home visiting Mom and Dad and avoiding your high school friends that never moved?

There will be some changes to the GRTFL in 2012, because with the world ending and all, this year we knew that this was our last year to get it right. We here at Grantland Laboratories have been agonizing over the GRTFL since the day it was conceived, working with the latest in blurcle technology to improve, applying advanced metrics to the cast of Celebrity Rehab and researching who is a Basketball Wife and who is a Basketball Jumpoff in an effort to rethink and perfect an admittedly imperfect system. We will be changing the scoring system, mainly because Snooki scoring no points for smashing into an Italian cop and being hauled off to jail was the greatest injustice in America since Fugee John Forte was pardoned by George W. Bush. We will be adding some new GMs, because Lane Brown is no longer alive with Grantland and because by week four everyone was too lazy to send in message board posts. We will also be adding some new shows, which means adding some new players to the potpourri of this maniacal collection of human beings we cover in this draft. Let’s have a peek at some of the people and programs we will be covering in 2012, shall we? Yes, we shall.

Show Title: Mama Drama
Debut: January 1, 10 p.m., VH1
Trailer: What? No trailer? This show debuts in a week and there isn’t a single frame of footage on the Interwebs? I don’t know what that means, but it isn’t normal.

Thoughts: If you aren’t familiar with Mama Drama, it is Jersey Shore creator SallyAnn Salsano’s latest effort to stunt our great nation’s cultural growth. The formula is simple: find pairs of mothers and daughters who party together, put them in a house in Las Vegas, and watch them fight and/or drown their delusion in cosmopolitans. The lack of promotion for what looks like a hit on paper is interesting. Are they ashamed of it? Do they have a big push planned for next week? Are there lawsuits involved? Do the suits at VH1 have a conscience, and are they reconsidering airing the show? No chance it’s the last one. After all, this is the network that brought us Flavor of Love, Shot of Love, and had a “docu-series” about Hulk Hogan’s trampy daughter. When we launched the GRTFL way back in the old days of June 2011, we included another show that looked good on paper, Love in the Wild. That turned out to be a waterboarding of a television show. After that disaster I vowed never again to include an unproven property in the GRTFL, but Mama Drama is just too trashy/shameful/morally deteriorating to omit. I am a little nervous about this, not only because I fear it will underperform from an entertainment standpoint; I fear that watching it will give me some form of eye chlamydia.

Scouting Report: When in doubt, go with hotness. We haven’t seen anything from these ladies aside from one still photo, so evaluating this lot is a bit like evaluating European NBA draft picks. In this scenario, hotness equals height. You can’t teach it and it will always prove valuable when the game is on the line.

Thoughts: Ho fucking hum. If I told you there was a trailer for a new season of Jersey Shore online and asked you what you think happens in it, you could detail the whole thing shot-for-shot without seeing a second of it. They go to Jersey, they get drunk, they get in a food fight, they get in a fistfight, they argue, they make up, they make out, they party, they party some more, and then they party some more and some more. They really need to make a drastic change to this show. Heck, I even did the heavy lifting for them. How do they not evolve? How are they just going to keep hitting the same note without seeing the backlash just around the corner? How do the producers look at the footage of Snooki and Deena doing the whole drunken meatball routine and not say to themselves, “This isn’t worth it, I am going into the seminary”? Will I watch it? Of course, we all will. And therein lies the problem. Just to prove how easy it is, I am going to rattle five more “fixes” off the top of my head that they should have incorporated to inject some much-needed new energy into a popular but post-peak franchise:

Celibate Season: Have sex and you are off the show.

Working Class: Strip the cast of all access to cash and have them live only on the wages they make at the T-shirt shop.

Summer Stalker: Each cast member shares a room with a superfan.

No G, No T, No L: Each cast member is forbidden from tanning, hair products, extensions, workouts, clean clothes, etc.

Stick to the Script: The cast is forced to write, star in, and direct a feature film over the course of the summer.

Look, none of these are genius (I like the stalker idea a bit, though), but if I can squeeze out five in my current “no one is left in the office, no one will read this on a holiday Friday anyway, what am I still doing here?” mindset, then I am sure that the folks that are becoming thousandaires off of this show could do better if they dedicated themselves. I am ready for Jersey Shore to be in the rear-view mirror of society remembered as a weird “How was that so popular?” part of pop-culture history, like the Spice Girls, astronaut ice cream, and Garbage Pail Kids.

Scouting Report: Go all in on the meatballs. Did you even see Sammi, Ronnie, or Paulie D in the trailer? Vinnie goes home, Sammi doesn’t say a word, and Ronnie looks a lot more Ronnie than Single Ronnie. Methinks this season is the season of the meatball. Granted, we only have one season of stats to work with, but Jonah Keri has Snooki VORP in the triple digits.

Show Title: The Challenge: Battle of the Exes
Debut: January 25
Trailer: CHECK IT OUT HERE

Thoughts: I’m in. There is something about TJ’s disinterested articulation, CT’s menace, Bananas’ intensity, Cara Maria’s insanity, and Mark Long’s refusal to retire that will get me every time. I would have liked to see nudity, a homicide attempt, an arrest, more tears, and CT make good on his threats of cannibalism, but I am happy with where they went with this season. Again, I mapped out what they should have done with this season in a GRTFL message board a while back, but the gimmick of pairing up ex-lovers will be good enough of a catalyst for hookups, fights, and inanimate-object assaults to keep this season interesting.

Scouting Report: Jasmine, Jasmine, and more Jasmine. In the trailer she does all of the following: assaults an inanimate object, throws a punch, and does this creepy knuckle-cracking thing that a Bond villain would do before choking someone. There may be an Andy Dalton hiding somewhere in this draft, but she is Cam Newton: a sure thing.

Thoughts: Rafa Nadal is back! Last season’s The Bachelorette runner-up is back and has a pack of 25 of the most desperate hussies casting can find that can’t wait to get on television to be engaged to Rafa Nadal. I have never been a big fan of the Bachelor series, but do look forward to the first few shows before Ben has voted off the chemically imbalanced, crazy-faced, “I should probably Google her, I bet she has a criminal record” ones of the bunch. After it is whittled down to about five ladies left it turns all serious, Ben starts to feel guilty, and I check out as a viewer. Have a look at the ladies in the link above. There is one who can’t wait to feed Ben cow testicles, one model who represents every negative stereotype you have ever heard about models, and one that moved to New York, has a blog about “love,” and has always dated “Mr. Wrong.” Is this a real thing? Are there really young women that move to New York to become Carrie Bradshaw? I always thought that was a myth that the media created, like Y2K, Tim Tebow, and Canada.

As the year goes on, there will be celebrities that need rehabbing, pads that need to be bachelored, and basketball wives with drinks that need to be thrown that will be added to the GRTFL roster. In the meantime, I encourage you to get some friends together and prepare a league of your very own. For real, right now, e-mail five or six of your buddies and ask them to be in a reality TV fantasy league with you. On second thought, you might want to make that a phone call. You don’t need a paper trail out there on the Internet proving that you solicited your friends to be in a reality TV fantasy league that scored points for fights, STD scares, coitus denials, and cannibalism.

Check back next Friday for the year in reality review. Enjoy your holidays.

5 Rules for Rapping in Public