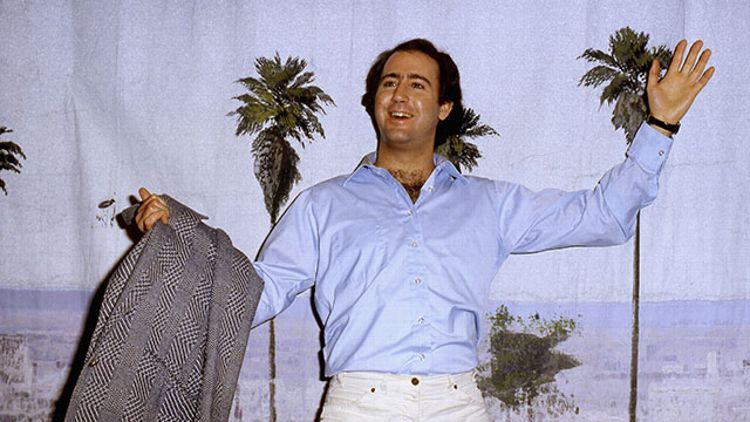 Here, via the website of a New York theater collective called Truant Arts, is an excerpt from the bio of one Alexandra Tatarsky, who recently appeared as Jane, “a farm girl with big city dreams and an anxiety disorder,” in a Truant production called Chaos, and Other Worldly Possessions:

Alexandra Tatarsky is [a] theater artist from New York City. She has adapted the absurdist vignettes of Daniil Kharms for the stage and performed in wild rewritings of Hedda Gabbler [sic], The Bacchae and the Yiddish spirit possession love story Dybbuk.

It looks like Tatarsky will soon be able to add another absurdist stage vignette to her list of credits: An anonymous source tells the Smoking Gun that the woman who showed up at a comedy club in New York this week claiming to be the 24-year-old daughter of a still-living Andy Kaufman was actually Tatarsky, whose father is in fact a psychologist, not a pioneering alternative comedian who died of lung cancer in 1984. Or didn’t. It’s confusing. Anyway, her dad’s alive and she’s not Andy Kaufman’s kid, probably; she’s said to have met Michael Kaufman earlier this year at a gallery show of Kaufman ephemera.

Here’s what happened. On Monday night, near the end of the 9th annual Andy Kaufman Awards — founded by Kaufman’s father, Stanley, to honor Andyesque achievements in comedy — Kaufman’s brother Michael took the stage, ostensibly to re-address longstanding rumors about Kaufman faking his own death. Michael revealed that he’d found Andy’s notes for an elaborate death hoax, which would end with Kaufman’s reappearance at a restaurant on Christmas Eve in 1999. Michael Kaufman said he went to this restaurant on 12/24/99. Andy did not appear, but someone handed him a letter explaining that Kaufman had been in hiding since 1984, was now married with a young daughter, and wanted his brother to keep up the hoax as long as their father, Stanley, lived. Stanley Kaufman died this past August; Michael Kaufman told the crowd that he’d subsequently been approached by a young woman claiming to be Kaufman’s daughter, who told him Kaufman was still alive.

At this point, “Kaufman’s daughter” — whom Michael never named, citing concerns for her privacy — took the stage. TMZ has the video, in which young Ms. Kaufman sure seems an awful lot like a theater actress giving a somewhat mannered and self-conscious performance as a character who is flustered and nervous and doesn’t know what to do with her hands and is maybe a farm girl with big-city dreams and an anxiety disorder. It’s hard to imagine anyone watching the clip and not seeing right through it, even before the Tatarsky news broke. And while postponing an interview with The Hollywood Reporter for the second day in a row, Michael Kaufman was quoted as saying “This is so, like, out of my league what’s going on here,” which sounds an awful lot like what you’d say if you were the brother of a legendary prankster/provocateur and you’d been caught trying to pull the wool over the eyes of the media without help from said brother because said brother was in fact dead.

To be fair, before he died, in 1984, of lung cancer, at Cedars-Sinai, in front of his loved ones, and was buried in the Kaufman-Bernstein family plot in Beth David cemetery in Elmont, New York, Kaufman did often talk about faking his own death. In 1999, Kaufman’s friend and frequent co-conspirator Bob Zmuda — who still performs as Kaufman’s lounge-singer alter ego Tony Clifton here and there — told The Village Voice that Kaufman “was always looking for the ultimate hoax. You don’t get better than faking your own death.”

In 1980, according to Bill Zehme’s book Lost in the Funhouse: The Life and Mind of Andy Kaufman, Kaufman sought out and befriended the media hoaxster Alan Abel, who’d recently tricked the New York Times into printing his obituary. (“I got eight inches of space, which is two more than the guy who invented the six-pack got,” Abel told the Huffington Post in May, in a story about Kaufman death-hoax believers. “Only he actually died that day.”)

“He wanted us to collaborate on something really fantastic and enormous, but we could never figure out what it would be,” Abel told Zehme in the book. “He was especially fascinated with … how I had gotten people to believe I was dead. He’d say ‘How can I do that? I want to do that.'” Zehme also quotes a producer from the ABC sketch-comedy series Fridays, on which Kaufman was a regular, who said Kaufman once talked to him about faking his death and reappearing on Fridays a few months later.

But look: In life, Kaufman didn’t hoax just for hoaxing’s sake. He was a provocateur who antagonized his audiences and fed on their shock and confusion. It’s entirely possible that he left behind instructions for pranks to be conducted posthumously, and that one of them involved the appearance in 2013 of a long-lost daughter who’d testify to reports of Kaufman’s death being exaggerated. But sending an emissary from his new family to convey his warm feelings about an event called the Andy Kaufman Awards seems a little soft for Kaufman, a little like the kind of affectionate wink at his legacy that a loving brother might come up with. If Tatarsky had stormed the stage to announce that Kaufman was alive and wanted nothing to do with this sad farce of an awards show, this stunt might have fooled more of the people for more of the time.