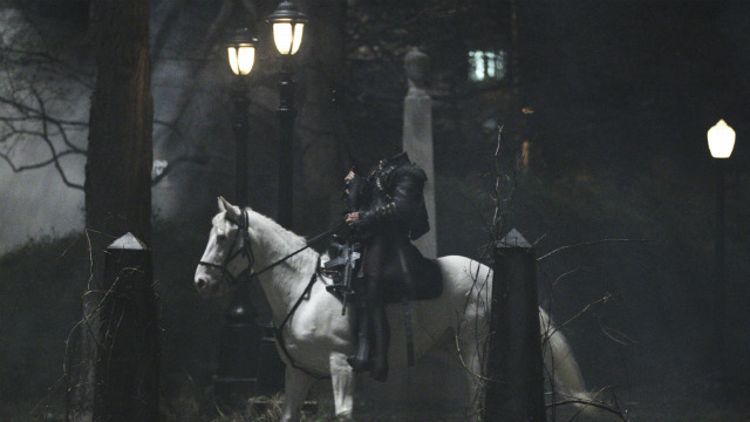 It’s hard to watch Fox’s Sleepy Hollow (which returns tonight on Fox after a brief World Series break) without wondering how it wound up being this solid. An eerie, mystery-laden network drama so soon after CBS burned us with Under the Dome, which happens to film in the same town? Recurring shots of George Washington in the Revolutionary War? Time travel, fish-out-of-water setups, the Four Horsemen of the Apocalypse? Yes, yes, yes till infinity. Somehow it’s one the biggest hits of the season, and somehow it feels like it deserves to be.

The series comes from three veterans — Underworld director Len Wiseman, Transformers and Star Trek writers Bob Orci and Alex Kurtzman — and one complete IMDb newb. The latter is Phillip Iscove, a 33-year-old Toronto native who, before coming up with the show that would get a second-season order just three episodes in, toiled for seven years as an assistant at United Talent Agency. Grantland spoke to Iscove about pitching Sleepy Hollow to two of Hollywood’s supreme geek-writers/producers, moony Tumblr fans, and the privilege of making a cable-style 13-episode season for network TV.

The Sleepy Hollow story is old enough to feel set in stone. Can you take me to the moment when the premise became malleable and turned into a TV show in your head?

I love the Tim Burton movie, and I had read the short story many years ago. I was sort of doing some research online and saw Washington Irving and saw Sleepy Hollow and then Rip Van Winkle, and that was kind of the aha moment: Can I just put Ichabod Crane to sleep? Can I just have him wake up in 2013, and do time travel without doing time travel? I loved Quantum Leap and I kept thinking to myself, Is there a way to do time travel without doing time travel? Because the second you say “time travel” in a pitch, you’re gone.

Are you surprised you pulled it off, just parachuting in like that?

Click here for all of our interviews with fascinating people from the worlds of sports and pop culture.
It’s one of those things where you just never know what people are gonna connect with. It’s a big concept, and a lot of people probably had some preconceived notions, but I think we’ve hopefully dissuaded them of those notions.

The show feels so fresh. How much of that has to do with you being new to all of this?

I don’t mean to be dismissive — thank you, first of all, for saying that — but it is a tremendous group effort. I really believe it was a confluence of so many things just clicking. I still remember sitting in that pitch with Alex and Bob and that moment when Alex said, “What if the Headless Horseman was one of the Four Horsemen of the Apocalypse?” The whole thing just blows open and you start to see a television show. I think about the moment when we all talked about Ichabod being a Revolutionary War soldier and then that takes it to that next level and it has that National Treasure feel all of a sudden. A concept like this, as Bob and Alex like to say, is one molecule away from insanity. We have these two phenomenal actors at the center of our show — Tom [Mison] and Nicole [Beharie] are so phenomenally talented. Without two actors like that to ground the whole thing, it could have potentially floated away into madness.

Ichabod trying to navigate the world of Starbucks and GPS could have played very cheesy, too, and it doesn’t.

The man-of-the-time thing is something we always wanted to have fun with. You’re right, it definitely could’ve played silly in the hands of a different actor or different producers and writers. But I think that Bob and Alex, rightfully so, pride themselves on making shows that are really grounded, emotionally. Twin Peaks was a major touchstone for myself and the guys; we all love that show. I think we all sort of came at the show with that spooky, dreamlike quality Twin Peaks lives in. We thought if we came at the whole show from a somewhat dreamlike perspective, everything could be tweaked just enough that it was sort of creepy and weird. We never wanted it to get to that place where Ichabod felt like a cartoon character.

His clothes, though, man …

[Laughs.] Ichabod’s clothing is a part of him, and, as Alex said, it’s a security blanket for him. It’s an important part of his character. I think that he’s going to hold on to that as long as he possibly can.

Even if he smells.

He did wash his clothes, in the second episode! It was brief, but he washed them.

Maybe he can take up clothes-washing as a hobby, then.

I understand people’s reaction to the fact that he could potentially have an odor, but he did wash them. They’re not dirty. They’re old, but not dirty.

Did you know before you were a few episodes in what a strong pair you’d cast?

We definitely had a sense from the test, but once we saw them on the screen, in that pilot, we just knew we had something so incredibly special in the two of them. It’s that really intangible lightning-in-a-bottle thing.

Was the Abbie role written for an African American actress? It’s a big facet of celebration around the show online. There is a dearth of nonwhite faces on TV, and you’re suddenly very visibly doing something different.

I don’t think we wrote the role thinking about that sort of stuff in general. We just wrote the role we wanted to write. We just wanted the best actor and the best possible person, and Nicole was just the best person for it. I don’t mean to be too glib about it, but that’s the truth. And it’s worked out in a way that we have a diverse cast, and that’s fantastic — to see the best actors on display, and that it happens to look like America looks right now.

Fox recently strongly advised other shows to follow your lead, as far as diverse casting, if they want to succeed.

It goes without saying that you want as many people watching your television show as possible. And there’s a wide, wide wonderful spectrum of people in this country and obviously on this globe, and you want them to see themselves on TV as much as anyone else. I think that’s important.

Do you want people rooting for Abbie and Ichabod as a couple?

The ‘shippers are out there in full force. It isn’t something that we are — I don’t want to say “not aiming for,” but it’s not something we’re thinking about right now. Crane is married, and Katrina will continue to play a vital role. The sweeping romance of these two people that are torn apart through purgatory and any number of spells and supernatural what-have-you, that’s the romance angle we’re playing as of right now, and that’s exciting to us.

How does it feel to not only have this show you created air on TV each week, but to have Tumblr and Twitter also blow up with all this instant fandom?

It’s incredibly humbling. When it started, I couldn’t believe how quickly people had attached themselves to these characters, in the best possible way. I was thrilled. As a person who has never done this before, I’m incredibly excited to be a part of this and I feel incredibly lucky — but to go from being an assistant a year and a half ago to now is a little bit discombobulating.

How do you feel about making 13 episodes versus 22?

We’re all really happy with the support we have from Fox to make 13. A lot of the shows I watch nowadays are on cable — I do watch network shows as well, but the cable model of 13 episodes is great. I think when you do 22 there can sometimes be filler episodes. If we were doing 22, there’s the potential of us going through a lot of story a lot faster. The idea of us making a really tight 13 episodes that can stay at that really high level of intensity and story and character is really exciting to us. Obviously as a fan of television and as someone who’s watched seasons of 22, there’s that desire for more. We all wish our favorite television shows were on 365 days a year, so I can understand people wanting more. But I think we’re very happy doing 13.

What would you do if Fox called after we hung up and said, “We want 22 for next year.”

I imagine we would rise to the challenge.

What other shows are in Sleepy Hollow’s DNA? You mentioned Twin Peaks, and it seems like The X-Files had to have come up in the writers’ room.

The X-Files definitely comes up. We talk a lot about shows that are on; we talk a fair amount about Game of Thrones, just in terms of how bold that show is and how it goes for broke every week. We definitely want to emulate that in a lot of ways. We want our show to feel like a season finale every week.

Do you guys have a big whiteboard of historical ideas to pull from? You’ve already thrown in modernday Hessians, Roanoke, George Washington, an unrecognizable form of Old English …

There are a lot of historical moments we want to tap into during the Revolutionary War, but we also want to sort of be able to make them our own. But we definitely have the whiteboards you’re speaking of. We have that list.

Is there an endgame?

We certainly know in broad strokes where we’re headed, and what we want to do from a very, very high altitude, but I think that as with any television show, it’s a growing organism that changes. You need to be open to those changes, and we’re excited about that. We want the show to tell us where it wants to go.

Tell me someone or a couple of someones you’d love to have on the show. Aim big.

We’re all big Twin Peaks fans over here, so if there was any way to incorporate people from that show, that would be amazing.

Lastly: How confident are you that you can offer a cooler moment than the Headless Horseman strafing with a machine gun?

[Laughs.] I feel pretty confident, I’m not gonna lie. We’re breaking the last couple episodes of our season right now and it is epic and crazy and fun. We are taking big swings over here and we’re having fun doing it.

All right. It’s serious business, though. If I’m trying to recommend this show and I sense someone’s interest is waning, I just yell “Headless Horseman with a machine gun!”

It is definitely a very, very cool image that Len created for us, but I think we’re up to the task.