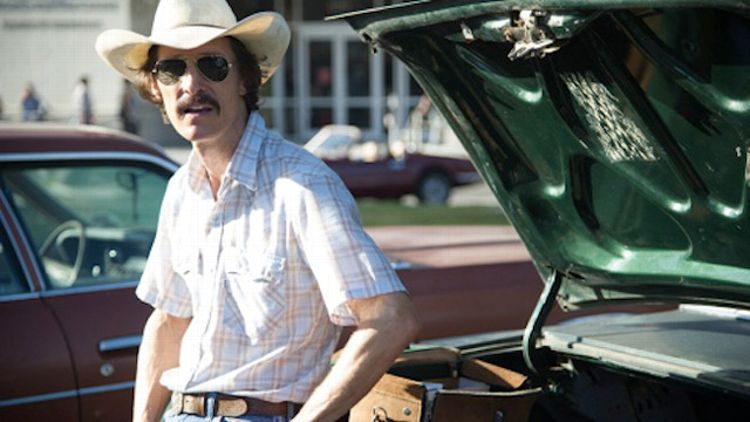 Usually when you interview actors face-to-face, there’s a little game being played: They try to remain calm, cool, and contained while you politely and objectively discuss the movie at hand. But the whole time you’re looking for subtle tells that betray who this person really is. Something to help your line of questioning or just get to know the human behind the hype and the image. Matthew McConaughey blows that out of the water.

When I enter his hotel suite brushed with nonthreatening pastels, McConaughey is literally on the edge of his seat practically yelling at College GameDay, thrilled his beloved Longhorns have pounded the Sooners. We’re instantly talking about the epic NLCS Game 1 between the Cardinals and Dodgers, and the publicist has to remind us we’re here to discuss Dallas Buyers Club. So much for cool and contained: McConaughey is an ICBM of chest-thumping energy and deliberate eye contact. His face still bears gaunt traces of the nearly 50 pounds he lost to play Ron Woodroof, a hard-partying, homophobic Texas electrician who contracted AIDS in the early ’80s when it was still considered the “gay” disease. Given 30 days to live, Ron did what any red-blooded American entrepreneur would do: He partnered with a transvestite hooker (a nicely glam-rock Jared Leto) to smuggle alternative treatments, flaunting the DEA and FDA in the process — and living another seven years.

It’s the kind of great true story that floats around Hollywood for years garnering much love, if little faith it can get made. That it was McConaughey who got it made speaks to his recent total career 180, i.e., the McConaissance. After breaking out in Dazed and Confused, A Time to Kill, and Amistad, McConaughey seemed set on the typical, lucrative heartthrob trajectory: a string of successfully anonymous romantic comedies with a Sahara or U-571 thrown in to keep him on the men’s magazine covers. However, the past couple of years McConaughey has unleashed some inner beast to shatter his perfectly airbrushed image with remarkable, unconstrained turns in wonderfully eclectic films like Bernie, Killer Joe, Magic Mike, Mud, and now Dallas Buyers Club. So, sitting down to talk with him, I didn’t have to search for the human behind “Matthew McConaughey.” He was staring me right in the face, and offering to change the channel to Game 2 of the NLCS. But I took the publicist’s hints to get down to business and talk about the film.

Dallas Buyers Club is a great story and a wonderful performance, but I want to get the obvious question out of the way first. Is there some acting club or Internet forum where you, Christian Bale, and Natalie Portman trade rapid weight-loss tips? Or is it a secret black book that gets passed from A-list actor to A-list actor?

Hah, no, I don’t think so. I’ve talked to some people who said they did nothing but apples and Diet Coke, yada yada yada. And I was like, “Hang on a minute. I’m not gonna crash into it.” So, I gave myself three, four months to do it. I went talking to nutritionists because I wanted to know the easiest way to do it, and one thing was consistent. They all said it was going to be easy to drop it. It’s on the way back, gaining it back, that you’ve got to be real concerned.

Click here for all of our interviews with fascinating people from the worlds of sports and pop culture.
Yeah, but they said there’s definitely healthy ways to drop it. The overall thing was, you’re going to drop down, it’s going to be pretty much common sense, we’ll take your blood pressure along the way. You’ll know how you’re feeling, if you know your body. “Joint integrity.” That came up a bunch. Joint integrity.

Yup. Your knees, your elbows, your hips, and ankles and stuff. But I did it, and I was doing, protein — fish — and vegetables, three times a day. And I drank my wine at night, and I was losing three and a half pounds a week. Once I started it, my body was like, OK, we get it. I did it until I lost 47 pounds.

I bet you could make a mint writing a diet book about it all.

Here’s my real question: How does it affect the performance, when you’ve lost that much weight and you’ve got a different body. Does it affect your mind?

No. Not like an affectation. What happens is the whole process is informing the process. What I mean is: What comes with losing that amount of weight? What comes with looking that pale and gaunt? Number one, how many times a day, how many hours a day, are you anticipating a meal, preparing a meal, or eating a meal? For me it’s about three and a half hours a day. So that’s three and a half extra hours.

Now, how many hours a day am I outside? Well, now I’m inside. So, now I’m forced, I’ve got an extra eight hours that I was sublimating, that I’ve got to fill. And I’m inside and if I get bored and I want to eat — OK, I’m not doing that. So what am I doing? Well, I’m going to read, I’m going to write, I’m going to research. I’m going to work on something. While everyone’s out there having fun, I’m in here, and I’m not eating. Now think about this. Cut out all the meetings you have with someone at a restaurant. Not doing that anymore. Want to meet me? Come here, I’ve got my controlled meal and my controlled environment. So I became a bit of a hermit. And becoming that and doing all the research and writing stuff — well, I didn’t think about it until it happened, but this is exactly what Ron was doing. He had to dig out of a hole; it was him against the world. And he was like, “No one knows a thing about the disease. I got to do my own research. I got to go around the world, I got to fight the power.” So that’s informing.

You’re right, that does sound very much like Ron’s experience. I mean, minus the lethal disease.

Yeah, and if I lost 40 percent energy and power from the neck down, I gained 40 percent from the neck up. And a surgically acute, cutting awareness. I mean, to where in real life the people around me had to watch out. It was like I was clinical, and that was raw.

So it does really change your demeanor.

Well, look at an animal when they’re hungry. You get feverish. You’re like, [hissing sounds]. Desperation comes out of that. It taps into things. “Oh, that’s what Ron was going through.” But it puts me in a place, informs me, where I’m hungry, literally and figuratively. Which is what this guy was. So for me, I just start going, what of these things I’m feeling personally can I carry over? So, remember that and be in that. And I’m there, and it’s just happening.

And I know you read his diaries. Did you find anything in them that you recognized personally from the hunger and starvation?

Most of the diary stuff was pre-HIV. But what was great about that was I had plenty of tapes of him post-HIV, when he’s got the buyers club. And you see him selling, you see him smuggling. He’s talking about why his drugs are the right way to go. But the diary gave me the monologue, so then I could have the dialogue. Who’s the guy sitting at home alone smoking weed at ten o’clock Friday night, doodling in his diary, writing a funny joke and a shitty too-strong poem?

Oh yeah, poetry, lyrics. He was a funny man. He was funny. And he’s got his pager and his battery’s charged for Monday morning and no one’s calling. “I thought I was going to have a big work day today, so I think I’m going to slip on down to the Sonic, go get me a double jalapeno burger because that girl Angie down there always gives me a free one. And you know what, I’ll go fill up my tank but I can’t fill up. I can only put $6 into my tank today because I don’t have it in my budget.” He was super meticulous.

So, he had all that brain matter —

But he didn’t have that much to do! If you’re that meticulous about that kind of stuff — I mean, he had rulers and graphs, man — yeah, you’re dying inside, man. You wanted to get the fuck out of here, didn’t you?

He sounds kind of like a real-life Walter White in a way: This death sentence gave him focus and drive.

Well that’s what gave him structure and purpose. His family said he never would finish anything, with a woman, with a job, with an idea. He’d get to the end and he’d disappear. Here for the first time, you’ve got something to grab a hold of. I never even thought of the Walter White/Breaking Bad thing. But yeah, this gave him identity. It gave him something to fight for that he couldn’t just walk away from.

The other thing about this movie is it’s funny. It may be the funniest fact-based AIDS drama I’ve seen.

But it is by nature an AIDS drama. How does that work, toeing the line between humor and drama, especially in something so real and serious?

Well, he was already a cantankerous, blaspheming bastard in the script. But then I grabbed all this humor from stuff and stories he’d tell. Even how he talked about “Man, if I don’t get a cure, I can’t get my dick up, I’ll piss myself.” So he’s talking about being broken down by this disease. Even pre-disease, he had an incredible wit. People’d go, “I can’t believe the shit coming out of his mouth.” [Director] Jean-Marc [Vallée] and I got together and I said the further I go and stay true to this guy’s conspiracy theories and blasphemous, sadistic humor, the humanity’s going to come out. A lot of times, he’d be like, “Are we going too far?” And I’d be like, “I don’t think so, man.” If we hold this line, his humanity’s going to come out. If we keep him a businessman, the crusader will emerge. But he doesn’t need to go, “Give me a flag, I’m your crusader.” He doesn’t need to go in Act 3, “Woe be my wicked ways. I’m sorry!” Uh-uh, not him. We were always like, this is not that movie where we have the violin strings of sentiment hit at Page 85. We got to write and just trust the humanity will come out. And I feel like it did.