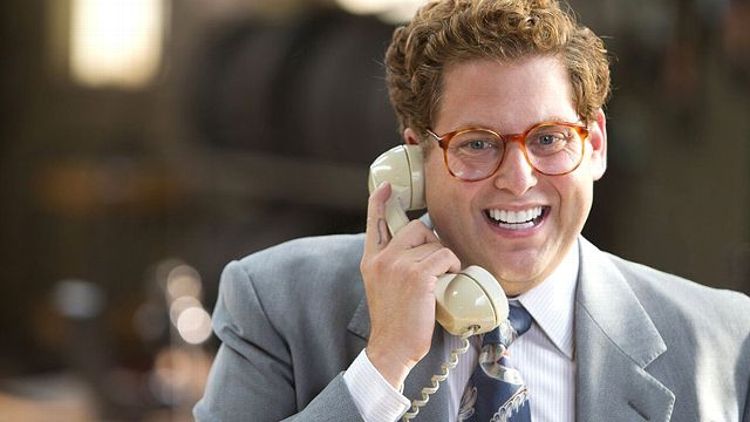 Sporting hyper-clean fake teeth, wire-frame glasses, and a pastel sweater that recalls the very worst fashion decisions of the early 1990s, Jonah Hill doesn’t look “good” in his latest film, The Wolf of Wall Street. But he does look perfect for the role of Donnie Azoff, a pill-popping party addict who matches his indulgent behavior with self-aware douchebaggery and enough business sense to rake in millions. He’s the definition of one-percenter excess, and Hill seamlessly slips into the persona. The actor connects his comedic sensibilities — and the big guns, last seen in 21 Jump Street and Superbad — with the gravitas that earned him an Oscar nomination for 2011’s Moneyball. In Hill’s hands, Donnie is despicable, hilarious, and a terrifyingly plausible product of the American Dream.

But any trepidations Hill had over inhabiting Donnie were trumped by the prospect of working with Martin Scorsese and Leonardo DiCaprio. At 30, Hill has worked with his fair share of visionary filmmakers, from Judd Apatow to Quentin Tarantino to the Duplass brothers. But for the film buff, aping under the eye of Scorsese was pure joy. If it meant dropping a live goldfish in his mouth (it did), Hill was ready to go full Steve-O for the director behind Goodfellas. Donnie was high on Quaaludes; Hill was high on Hollywood dreams.

Below, the actor describes the highs and lows of The Wolf of Wall Street.

How did Wolf memoirist Jordan Belfort’s own descriptions of “Donnie,” the movie’s version of the real life Danny Porush, inform your interpretation?

Donnie is a composite character, taking things from different people. But the way he was in [Terence Winter’s] script and the way I view him and the way I pitched him to Leo and Scorsese was a guy with no impulse control, no morality. Basically, an animal. Someone who values being rich over everything else.

Playing someone without moral compromise must be extremely fun to play, but also demanding.

Click here for all of our interviews with fascinating people from the worlds of sports and pop culture.
It’s a physical movie based on all the insanity and fights and drugs and excess. It’s the most challenging part I ever played. When I was doing the scenes, I was engaged with working with Martin Scorsese and Leonardo DiCaprio — I was overjoyed and focused on that work. But I would drive home and feel a wave of guilt over all the things I had to do in that day. It wasn’t the drugs, but the things Donnie had to do to people.

You actually felt yourself crossing a moral line? That makes me think about a scene in the movie in which Donnie bashes a gay character. It’s brutal.

Oh my god, yeah. For me, there’s a scene where I fire this kid and eat his goldfish. I throw a cigarette at him and I smack him in the face and berate him in front of 200 people and fire him. Even though it’s acting, I saw this actor’s eyes and he looked really upset. He looked horrible. I took him to lunch that day and I said, ‘I’m sorry. You know this has nothing to do with how I am.’ And we connected and had a nice lunch. Even though you’re acting, the way this person treats people is the hardest thing you have to do.

That sounds taxing. How do you build up to those moments?

Once you get there, you’re focused on work. You’re focused on the character. But it was the time away from work where I would get sad or guilty about what I had been doing all week.

What cheers you back up?

Friends and family. But honestly, I watch a lot of South Park when I’m filming dark movies. I filmed this and True Story, another heavy movie, back-to-back. And I would come home and the only thing that would make me happy is South Park. It’s just so funny and bright.

Speaking of swallowing goldfish, I’m guessing that was a trick shot?

They wouldn’t let me eat a real goldfish. I didn’t want to for my own personal joy but I want everything that could be real to be real. We couldn’t do drugs all the time because that wouldn’t have been healthy, but everyone was going so hard on this movie, you didn’t want to be the person who wasn’t. PETA wouldn’t let me eat a real goldfish so they had a real goldfish and, on set, they had three goldfish handlers. Three real human goldfish wranglers. And I could keep it in my mouth for three seconds at a time and then we had to put it back in water.

So you were putting a real goldfish into your mouth? Just no swallowing.

Yeah! And I’m not kidding, in the first take it went bathroom in my mouth.

A goldfish has peed in your mouth.

What is Scorsese’s direction like? How does he push you on set to be this morally extravagant person?

You do a lot of rehearsal ahead of time. That was the most intimidating part. The first month of rehearsals was just Scorsese, Leo, and myself. This was their fifth collaboration and to walk into that was intimidating. It wasn’t talking about the work that got me intimidated; it was the first lunch we had that day, where it was just small talk. The social elements. What if I say something stupid? I don’t want to embarrass myself in front of Martin Scorsese.

I couldn’t help but think that Joe Pesci might be your spirit animal in this role.

Joe Pesci’s performances in Scorsese’s films are absolutely brilliant. I’ve actually gotten to know him. At the premiere, I hadn’t seen Scorsese that night but I had seen him doing press stuff. So I asked Leo if I should say hi and he said, “Yes, of course!” Pay your respects and stuff. So I walked over and said “Hey” and he says, “Hey kid, come here, come here.” And he brings over Joe Pesci. We talked for a half-hour. It was the most memorable moment of the whole experience.

Goodfellas is my favorite movie and Joe Pesci is my favorite performance in that film. His mix of drama and humor and being terrifying is something that I strive for. We were just sitting around talking. Joe was super complimentary about my performance and then the two of them started talking about something from 20 years ago. I was just standing there. I pinched myself. If I had known I would end up in this conversation when I was a kid, I wouldn’t have believed it. That movie is the reason I make movies.

I think people loved This Is the End this year because of the camaraderie. The comfort that you and the guys have. So seeing you and Leo have that same rapport is unexpected and welcome. How do you form that comedic relationship? How do you go there with people you’re less familiar with?

The difference between those two movies, two movies that couldn’t be more different than one another — what’s interesting is that, for example, when Seth [Rogen], Evan [Goldberg], [James] Franco, Danny McBride, and Michael Cera, and all of those guys, we’re trying to make people laugh. That is the goal of that film. What was interesting about working with Leo and some of these scenes being really funny, like the “Lemon” scene for instance … it really happened. Leo and I aren’t trying to be funny. In This Is the End you’re trying to be funny, but here we were reacting honestly to what it would be like to be on these powerful drugs. It’s ridiculous, but because the circumstances were ridiculous. We had a drug expert tell us what it would be like to be in a fight with someone while on those “Lemons.” That’s what we felt it would be like. It’s funny for a different reason.

Does that mean running around possessed by the devil in This Is the End and running around high on a “lemon” Quaalude in The Wolf of Wall Street demand different approaches? That the latter could be too funny?

It’s just different. You approach those movies differently. When I’m possessed by the devil, I don’t think people actually get possessed by the devil. When I’m saying, “Is it compelling, Jay?” I’m trying to be funny. That’s an abstract comedic idea. In Wolf of Wall Street, if you’re laughing or it makes you cringe or it’s hard to watch, you’re playing it like it would actually happen.

Speaking of realism, I wonder what a slow-motion shot of going ballistic on drugs actually requires?

In that moment, specifically, I was so excited that Scorsese was going to shoot me in slow motion on drugs. I was like, How crazy is this? So cool. I just felt like it was an iconic Scorsese moment. You remember those moments. To be in one of those shots is just the coolest experience.

You mentioned True Story, your next film, straining you similarly to Wolf of Wall Street. What were the emotional difficulties of shooting that film?

It’s a real story about real people. Moneyball was a drama, Wolf of Wall Street is a hard-core, heavy movie even though there’s a lot of humor in it. True Story is about a guy who is accused of killing his wife and kids, and a journalist who is trying to get his life back together and figure out what actually happened. So when you’re playing real people, they have lives and kids and horrible things actually happened in real life. It’s fascinating, but you want to make sure you’re being respectful to the people involved.

In True Story, you play the journalist, Michael Finkel, while James Franco plays the murderer, Christian Longo. That must be a change of pace from the movies you’ve appeared in together in the past.

It’s interesting, because for Moneyball and Wolf of Wall Street, I was acting against people I had never done comedy with. So Franco and I had just made This Is the End and then we were going into this film. [Laughs.] But that’s what excited me about it — watching two guys you’ve seen act together in a silly way, then watching them tell a very different story. James is such a good actor … we all understood the stakes of this film and that it wasn’t something you could take lightly.