Q&A: Hop Along’s Frances Quinlan on the Band’s New Album and the Art of Storytelling in Indie Rock 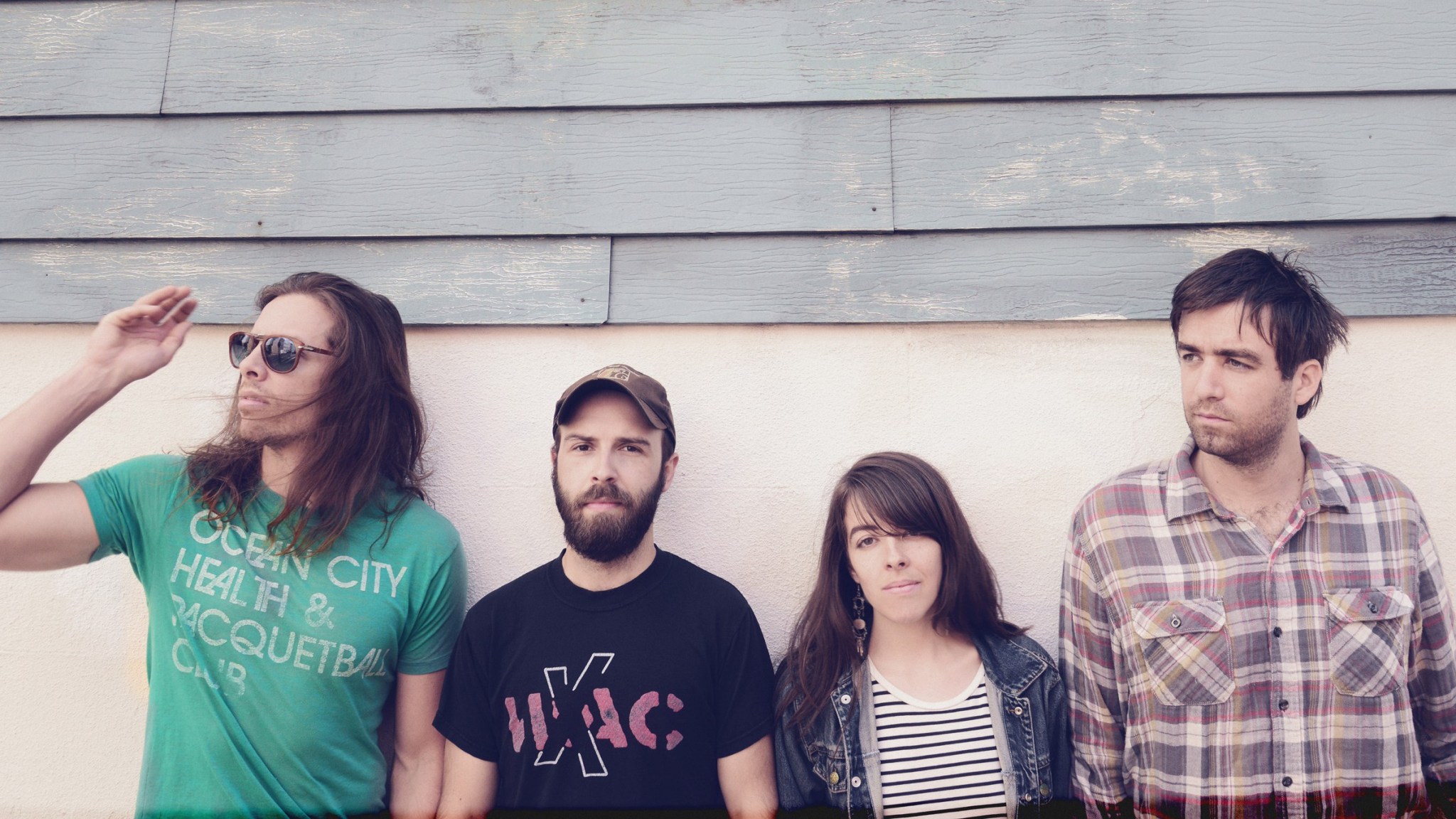 When it comes to storytelling, good beginnings often don’t reveal themselves as great until the end. The best have a fractal quality, the entire tale curled up and contained within a line, demanding to be unspooled and followed to its conclusion. In short fiction, this kind of opening is almost compulsory; in pop music, less so. But when done well by a band — as it is by Philadelphia’s Hop Along on its sophomore album, Painted Shut, out now on Saddle Creek Records — it can be quietly wondrous.

The record opens with singer, guitarist, and principal songwriter Frances Quinlan’s voice skating unaccompanied across the first few syllables of “The Knock” before the rest of the band (guitarist Joe Reinhart, bassist Tyler Long, and her brother, Mark Quinlan, on drums) slams in behind her. “8:45 a.m.,” she sings. “The dream just escaped me again.”

By the conclusion of Painted Shut, you can see that it sets the groundwork for an album of narrators who long to close an unbridgeable distance between who they are and who they want to be. She draws from her own life (as on “Waitress,” a taut song built around infidelity), but she also draws from the stories of others. “Buddy in the Parade” and “Well-dressed” are refractions of jazz musician Buddy Bolden’s life; “Horseshoe Crabs” takes its outline from the life of folk musician Jackson C. Frank.

Quinlan unwinds their stories and her own with a voice that initially appears smooth but reveals a papery grit and grain as she pushes it. It isn’t precisely virtuosic, but more bent perfectly around the words themselves. It curls around certain syllables with warmth, shoves through others brusquely. Her voice lends the words a weight, a lived-in quality that reflects careful consideration.

Reached by phone in a van somewhere between Albuquerque and Tucson, Quinlan got in-depth on her songwriting process.

Hop Along started as a solo project but has grown into a full-fledged band, so do you bring songs fully formed to the band or is there back-and-forth when it comes to putting them together?

There are songs I’ve brought like “Texas Funeral” that were pretty close. That song came really fast. It’s the newest song on our album. I think it was one of the few ones that was basically written that year, that summer. But then there’s songs like “The Knock” that [became] a totally different song. The only thing that stayed the same was the lyrics, and even those changed. Once the band has it, anything can happen. We did so much editing for this album because we knew we only had a small amount of time to record it, so we knew what we wanted for all the songs.

Yeah, I took a lot of writing classes when I was in school and that was always the main point. It’s about the story, it’s not about a part. I guess it’s almost even a journalistic approach — you want the meat of the whole thing. You don’t want some nice little moment — you want the whole thing to be strong. I think all writers are taught that you have to destroy things to build.

The stories of these songs are very everyday. Like “Waitress” seems like a story that could happen to anybody, but you’ve blown all those little emotions that happen in that moment into something so big.

You do a lot with juxtaposing almost surreal imagery with common things — I’m thinking of “building insects” against “putting the coffee on” in “The Knock.” Do you consciously approach the writing that way?

That song took a long time to put together. There are a lot of things that have been there from the beginning lyrically, but again, I can’t really think too hard about it. The job of a song changes, and once it’s out, it changes again. It’s weird: When you’re a lyricist but you’re also a singer, you have to keep in mind that you want the words to sing well. I really had to wrestle with [whether] the content was showing well, how it was coming through. That was a major issue with that song. I had to change the opening line a bunch of times because I couldn’t sing it. I couldn’t sing it tactfully and it was holding the song back. I sort of have to be very flexible about what a song can do versus what I can do. Because I don’t want to be a distraction in the song. I want to help it.

You really, though, have a range of going from a soft croon all the way up to a full-throated howl. Has that always been the way you’ve approached singing or did you have to develop it?

I think I’ve always kind of gone for it. I wish I could do more subtlety — that’s the real challenge. The easiest thing to do is flip out, just destroy yourself. I guess some people might feel differently about that. But it’s always fun to go crazy.

Well, it seems like a lot of these songs must be fun to sing and perform.

The great thing about this record is that we can play every single song live. It’s so great. [Our first album] Get Disowned has so many layers that playing them live would mean three or four more people onstage to convey what we did.

I was struck by the way that — while Get Disowned has so many layers — this album feels so tight and together and even interestingly funky.

Like “Powerful Man” has an almost Spoon-ish quality — little parts rubbing against each other.

“Powerful Man” changed dramatically halfway through. We were playing it slow and brooding and really heavy and it just wasn’t coming across. There was something about it that felt like we weren’t very present playing that one. We weren’t engaged playing it that way. We come from such different backgrounds musically that some of our best work comes out of us figuring the thing out all together, because everybody has a different idea. We’ll clash a lot, but it’s when we end up digging into it that things take an interesting turn.

“Texas Funeral” has not just a guitar solo, but a huge guitar solo. Did that come out of working with the whole band?

I mean that’s Joe. Joe’s an incredible guitarist. He writes incredible parts — he’s sitting right next to me. The thing is, nobody really tells anybody what to do in this band. Things come out of it. If they work, we go with it. If it doesn’t work, we’ll diplomatically tell each other. I know that I’m not going to be able to tell Mark or Tyler or Joe the best part to play. They have to figure that out. I don’t have that brain.

It gets hard because people have their own idea about what a song is. I get really wrapped up in how I think a song needs to feel. With “Horseshoe Crabs,” because I wanted to stick with the narrative and I knew the feeling of the narrative that I wanted to come across, we couldn’t … I don’t know … it wasn’t like a “we can do anything” song. It needed to convey a sense of, I don’t want to say despondence, but a sense of trouble. I didn’t want to get away from that. I didn’t want that song to become a nice song.

There are a lot of places — states — on this album. You have Texas, Louisiana, West Virginia, and California. Are you writing out of being in those places or is it a shorthand way to evoke something with a place name?

I didn’t realize that until we’d finished. [Producer] John Agnello mentioned it first, how there are states in a bunch of songs. I guess because some of the stories are so tied to places, it came out that way. With “Texas Funeral,” I had watched the movie Hud with Paul Newman and that’s all about this Texas rancher and his son. And Buddy Bolden was a New Orleans cornet player. With West Virginia, it doesn’t really come through in the song, but I was thinking about when this company spilled a ton of chemicals into a river in West Virginia and nobody could drink the water for months. That idea of trying to cover that up and not dealing with the fact that they disrupted so many lives. That’s why that state made it in in such a vague reference. I normally don’t bring up states, but it’s sort of a cheat code, putting a state in a song because you’re hoping it’s going to conjure a feeling.