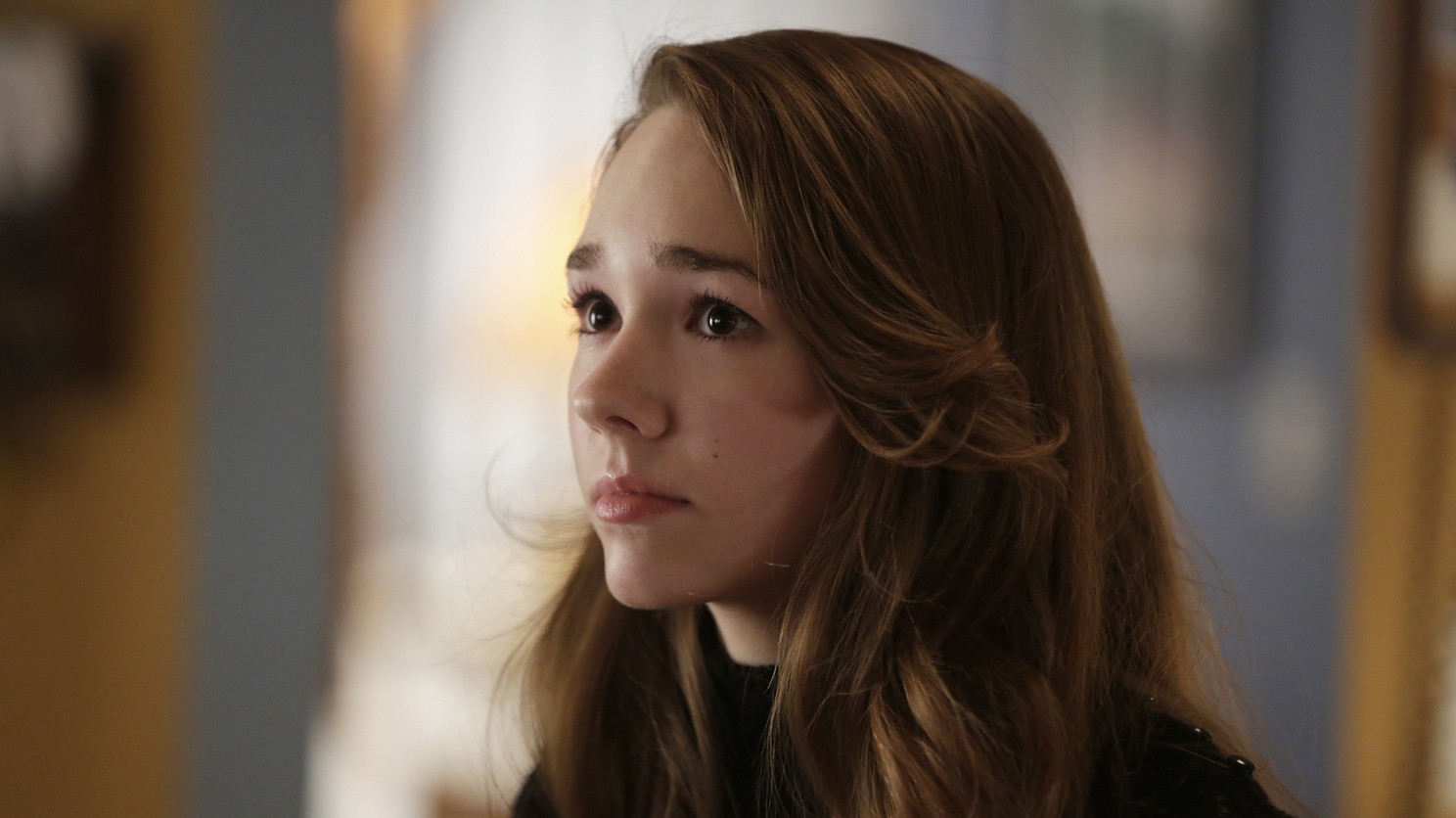 Holly Taylor, the 17-year-old actor who plays the daughter of the titular spy couple on FX’s The Americans, is at an interesting crossroads between her real life and that of Paige Jennings, her character on the series. She started her freshman year of high school right around the time the show was shooting its first season; as she wraps up her junior year and the third-season finale airs tonight, she is mulling her college plans while her television alter ego grapples with the revelation that her parents are Soviet spies. While all of that’s going on, Taylor has also started watching Felicity, the show that launched her TV mom, Keri Russell, from Mouseketeer to household name in the late ’90s. I spoke with Taylor about her character’s coming-of-age, her dated onscreen wardrobe, and the possible locations for the Jennings family’s secret wig stash.

So normally somewhere in here I’d ask you what you do with your free time, but do you even have any, between a 13-episode shoot and high school?

The Americans usually shoots from October through March or April, so for those months I’m working several days a week. But any days I’m not working, I’m in school pretty much, so it works out pretty nicely. We shoot in Brooklyn, and I still go to public school in my town [in New Jersey].

Oh, so you’re right there. I’m not a New York person, so it never occurs to me to assume these things are shot anywhere other than Los Angeles.

Yeah, you’ll read comments about the show online sometimes, and they’ll say, “That is NOT Washington D.C., that is OBVIOUSLY a landmark in BROOKLYN.” A lot of people call it out, but I think they look pretty similar.

And as long as they make everything look kind of grim, it feels like it’s accurate to the period? That was not a pretty time in American history.

I don’t think so either, according to my wardrobe. It looks really good. It’s just that it’s not very comfortable. So that just makes it less appealing.

Because you’re a dancer, right? So you’re used to going around in soft layers all the time.

Click here for all of our interviews with fascinating people from the worlds of sports and pop culture.
Yeah, exactly. Even when I wear jeans, they’re the stretchy jeans. It’s not this hard corduroy that buttons around your rib cage. Sometimes me and my mom will walk into my dressing room, look at what they’ve got hung up for me to wear, and go, “How could they do that to me?” But the clothes always look better on camera than they do hanging in my dressing room. So the wardrobe department does a great job; they know what they’re doing and you’ve gotta trust it. I talk to people who grew up during that time, and when it comes to clothes they say, “I don’t know what we were thinking.” I wonder if we’ll say that in the future, when we have kids.

So what was your reaction to Felicity’s initial choice to basically run away from home and chase this guy she barely knew?

I really appreciated it. I thought it was kind of crazy just because it was mostly for a boy, and I can kind of relate to Felicity in that I’m not very risky with decisions that I make. So I understood where she was coming from, even though I don’t have those same parents forcing me to do things. I was shocked, but I understood what she was doing.

And it’s not like she even had a plan. That really stuck with me, when I watched the show for the first time. It’s not like she knew what she wanted to do with her life, apart from Not Be Like Her Dad. Did any of that resonate with you after Paige’s arc this season?

I don’t know that Paige had a specific plan, but just from her passion that she shows with activism and the church, I think she definitely wanted to pursue something where she could express that passion and put it to work. Now she has to reconsider everything and decide if she wants to agree with what her parents do or not, and that’s kind of going to define her whole future.

When you first started working on The Americans, how much were the kids on the show clued in as to what the real plot of the show was? Were you allowed to watch the show when you were younger?

We got full scripts, so we knew what was going on. They involved us in it, even though our parts weren’t as big in the beginning. I was always allowed to watch the show, but there were certain parts where my whole family would be sitting on the couch and there was something really weird coming up or really inappropriate, and I’d either run out of the room or put a pillow over my head.

I think I was OK right up until that suitcase scene this season. There were noises that went with that that I will never unhear.

That was the worst! That part I did watch, because I was so amazed at how they did it, but that was horrible. The sound effects on the tooth-pulling scene, also. I was bothered by them.

Do you find it difficult as an actress, having read the script and knowing your dad is out having to seduce this kid who’s your age, and being a character who has to have no knowledge of that?

I definitely think there’s a parallel between Paige and Kimmy [played by Julia Garner], and that’s making it so much weirder. Kimmy has the same problems as Paige, she’s kind of independent from her parents, and she’s doing the same things Paige does, only instead of partying, Paige is rebelling through church. That was a similarity that made it really uncomfortable to watch.

Leading up to the finale, Paige hasn’t even been hit with the second reveal, that the Soviet overlords want her in on this life, too. Just speaking for yourself, how do you feel Paige would handle that transition?

I think it would translate really well into that environment. I think there’s another step before that, where she has to accept her parents first, and then accept the idea of herself going into the same job as them. But if she were to follow the same path as her parents, I think she has all the right motivation, the same as Elizabeth had.

And obviously it’s not up to you, but as an actress, where do you want Paige to go from here? What would you do if you could sketch out her career arc?

My dream path would be for Paige to be a spy, definitely. It would be a big plus if I got to wear a wig.

That was my next question!

The one wig that I want to wear so bad is that hippie wig that she wore, and she only wore it for one little scene, I think where she was watching Kimmy in the park. It was so pretty! I love bohemian fashion.

This is what I’m most looking forward to about the possibility of Paige The Spy, the audience having to be let in on some things as she’s let in. Because I have a LOT of wig-related questions.

I feel like that’ll answer a lot of questions, because they have to be shown explaining all this to Paige.

Where do you think the wigs are stored in that house?

That’s what I was wondering too! I was also thinking that’s something that will need to be taught to me in a spy montage, how to change those wigs so quickly.

We’re going to need an entire episode devoted to Elizabeth teaching you to do pin curls.

Because how do they do that? And how do they get them to stay on so well during their spy fights?

Here’s another spy storage question: Earlier this season, in the episode where Elizabeth drops a car on the guy in his driveway: WHERE DID THAT DOG COME FROM that she’s walking?

Oh my god, everyone was wondering that. I know that I, personally, have been lobbying for a Jennings spy dog. So maybe he’s a candidate? Maybe they keep him with the wigs and he’ll be revealing himself soon. Maybe it wasn’t even a real dog. Maybe it’s a robot dog.

I fully recognize that I’m focusing on the wrong thing in that sequence, but I have not been able to let go of the idea of a covert dog locker somewhere in the neighborhood.

I mean, you expect her to kill people at this point. You don’t expect to see her interacting with a cute animal.

Exactly. I don’t know where that came from, but I know where I hope it leads.

Wondering Woman: Why Warner Bros. Axed Michelle MacLaren, and What That Tells Us About the State of Female Directors in Hollywood