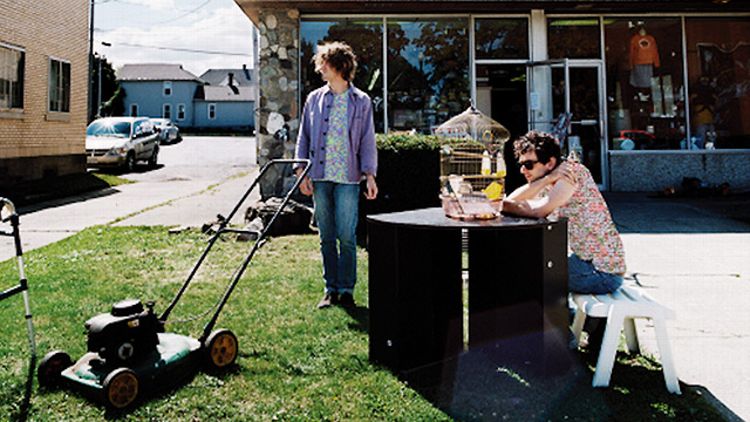 It’s only been five years since MGMT’s debut album, Oracular Spectacular, came out and turned the unknown musical duo of Andrew VanWyngarden and Ben Goldwasser into instant festival royalty. The pair became reluctant generational ambassadors with songs like “Kids” and “Time to Pretend,” which channeled post-adolescent anxieties through a golden haze that made them sound downright optimistic, even if perceived idealism was a willful misreading of the fairly grim lyrics, a trick played on the listener with hooks that channeled the childhood enthusiasm for which the songwriters were actually in mourning.

It was an insanely short slope from obscurity to oversaturation for Goldwasser and VanWyngarden, who met at Wesleyan University and were signed by Columbia Records in 2006, a year after graduating college. It’s hard to feel too bad for a band that never suffered through even a year’s worth of struggle before hitting it big with a worldwide string of hits that garnered fans like Paul McCartney, but let’s try. By the time MGMT achieved ridiculous mainstream success, Goldwasser and VanWyngarden had already begun questioning its validity. Was MGMT really the greatest, biggest band in the world in 2008? Or was it just incredibly lucky, in the right place at the right time, with a giant promotional budget from a record industry desperately trying to figure out how to monetize something — anything — off the Internet and make it into a new business model?

These questions have shaped MGMT’s evolution through its third album, the self-titled MGMT, which arrived on September 17. The not-so-long-gone time when “Electric Feel” lit up satellite radio stations every two minutes already seems like the very distant past, but the influence of MGMT’s first album is still everywhere in the middle-of-the-road genre now known as indie music, the platonic ideal of a blog-hyped band hitting it big. Yet even as the influence of Oracular Spectacular lingers heavily, MGMT itself travels ever further away from “Kids” as a sound, a song, and a general ideology.

That shift began with the band’s sophomore album, Congratulations. Having established themselves as the key purveyors of a wildly popular sound and sensibility, Goldwasser and VanWyngarden decided to reject the very style that brought them so many fans and warm accolades. Congratulations was a poison pen note to the neon headband–sporting, faux-tribal hordes that by 2010 had become an unavoidable part of the scenery at events like Bonnaroo and Coachella. MGMT swung from Oracular Spectacular’s winning and crowd-pleasing formula of indietronica pop with a wistfully acid-brained bent, and instead pointed its sound straight down toward the bowels of psychedelic darkness.

The band expressed a public wish not to release any singles from Congratulations, in an effort to get listeners raised on an ADD diet of streamed singles to focus on consuming the album as a whole. For such a distinctly modern-sounding act, this was an extremely ’70s idea: the concept album, and the concept is that the album only works as a whole. Goldwasser and VanWyngarden wanted to prove their rock elite street cred, and they did, with songs devoted to Dan Treacy from Television Personalities and to electronic glam spiritual godfather Brian Eno. “Brian Eno” was the heart of Congratulations, encompassing the band’s mission to create intellectual but immediately gratifying songs like those on Eno’s first three solo albums, but particularly the Roxy Music redolent art-pop of Here Come the Warm Jets and Taking Tiger Mountain (by Strategy), which combined arch-humorous lyrics with complex but catchy arrangements that often break down into searing noise.

The band’s wish to avoid singles was overruled, and four songs from Congratulations were eventually released, with only the title track/fourth single bearing even a passing resemblance to the MGMT sound that had been defined and refined on Oracular Spectacular. In place of Oracular Spectacular’s verdant synth lines and spuming grooves, Congratulations found the boys and their now five-piece band crafting flittering prog with Krautrock beats and bongo solos. Where MGMT’s lyrics had been playfully nonsensical, they became increasingly abstruse, although ultimately not too hard to actually decipher. Despite the surrealist veil, the songs espoused a narrative commentary on the ills of fame and the hollowness of success.

It can be difficult to sympathize with the burdens of success, but all of MGMT’s lyrics are shot through with the suggestions that Goldwasser and VanWyngarden consider themselves impostors to the throne. When Radiohead eschewed the era-defining Brit-pop perfection of “Creep” for something much weirder and less radio-friendly (if no less critically praised), crop upon crop of band sprang up to take over where “Creep” had left off, making room for groups like Coldplay to assume the mantle that Radiohead had rebuffed. Likewise, in the wake of MGMT abandoning its original sound, a million Internet acts applied the old fluorescent body paint in tribute, signaling fairly obviously that they, too, would like to be world-famous headliners commanding a swooning army of the young and drug-addled.

If Oracular Spectacular was a drug’s come up and peak, and Congratulations the inevitable comedown, then the self-titled MGMT is the day after the rave has ended. It’s the afterimage of the strobes, the echo of last night’s deafening beat cooling down to a thrum, while you search around the room for your glasses, your wallet, your lost serotonin. It’s the sound of what it feels like to melt into the rug. As a trio, the three MGMT albums chart the course of the rise and fall of youthful idealism. Hedonism gives way to genuine exhaustion, nihilism, and spiritualism battling it out for your adult soul. MGMT is not all darkness and despair, but there are a lot of hints that this is a breakup album.

VanWyngarden’s voice is run through all kinds of filters to sound higher, more watery, more distant. The album opens with a helium gas tweak version of his voice, just to knock you off-kilter and make sure you stay there while you listen through the rest. The most obvious single candidate is a cover of Faine Jade’s bubblegum psychedelic pop gem “Introspection,” which VanWyngarden sings through a trippy tremolo effect that sounds just like the one used on “Crimson and Clover” by Tommy James and the Shondells. MGMT as hallucinogenic sunshine pop makes perfect sense. Goldwasser and VanWyngarden did once dress as the girls of “Scooby Doo.” Maybe they also grew up listening to ’90s bands covering ’70s cartoon theme songs and internalized the grunge Day-Glo treatment. Currently, MGMT sounds like the Archies on E.

MGMT also calls to mind Steely Dan, a musical duo who met at a small East Coast liberal arts college and cultivated a shared niche aesthetic into a successful musical career. Steely Dan also seems like a band whose mainstream popularity might have surprised its creators, jazz-rock aesthetes who crafted cynical, cerebral songs in complicated, shifting tempos. For jazz-bearded weirdos specializing in doo-wop inflected songs about ’70s sleaze, in a band named after a dildo in William Burroughs’s Naked Lunch, Steely Dan remains wildly popular on dive-bar jukeboxes, with more than a dozen undeniably great classic hits. Considering the band seems so outwardly and unapologetically weird, Steely Dan has curiously wide appeal with classic rock fans. Steely Dan’s success is a great argument in favor of pursuing specificity instead of attempting to appeal to everyone: By being insanely specific and trying to please yourself, you might please everyone else, too.

Deeply connected duos like Steely Dan’s Donald Fagen and Walter Becker, or Goldwasser and VanWyngarden, manage to take that particular kind of inside joke that exists within friendships, and convey it through songs. You may not always understand what exactly the songs are about, but the ambiguity can be part of the enjoyment. You get the sense that the duos are speaking to each other through these songs, embroidering on a mutual thought or idea, trying to understand it themselves by expressing it together. But go too far inside, too deep into the code without making any openings accessible therein, and a duo risks excluding the audience altogether. Conversely, go too general, and the band might lose the particularity that made it work to start with. (Steely Dan and MGMT also share a genius for writing happy-sounding songs about depressing things.)

MGMT is both the broadest and most specialized MGMT album yet. It splits the difference between Oracular Spectacular and Congratulations, following its own internal logic toward the muted industrial underpinnings of “A Good Sadness,” with shades of Depeche Mode, or the skittering anxious drums of “Astro-Mancy,” and then down into the Nuggets rabbit hole again for “Alien Days” and “Mystery Disease.” MGMT rejects rock-style minimalism in favor of copious studio tracks, all the better to gauze over the raw emotions being sung about in the detached Eno-esque vocal style the duo developed on Congratulations. Seventies concept albums loom large on MGMT as well, in their ambition, scope, and sheer experimentalism.

MGMT is a headphones album in the best possible sense. MGMT is one of a handful of bands, along with Australian psych-rockers Tame Impala, setting the pace for current psych-rock, pushing the genre forward using whatever technology becomes available. Another godfather who comes to mind is Todd Rundgren, the ’70s critical darling who couldn’t decide if he wanted to make perfect power pop, or soul, or protopunk, or prog rock, or hard rock, etc., so he just made them all. Some people may have thought that was confusing, or overly eclectic, or, god forbid, pretentious. The chaotic folky electronic soundscape of MGMT’s “I Love You Too, Death” is a little silly, but it’s supposed to be. It’s both the bleakest and most beautiful, blatantly hopeful cut on the album.

MGMT might be missing a “Kids,” but it has its very own “Hello It’s Me” in “Plenty of Girls in the Sea.” While most of the album is devoted to what sounds like a bad breakup — at the very least an existential crisis — the penultimate track is a fairly straightforward rocker that sounds like some of McCartney’s solo songs from McCartney II (the amazing 1980 album in which McCartney discovers drum machines and synthesizers). True to form, “Plenty of Girls in the Sea” is an exhilarating song with lyrics that are pretty sad when read in print. At first, the fact that this sounds like a Beach Boys melody run through a fax machine distracts you from noticing that it’s an ambivalent song about making peace with being alone, even if you’d rather not. But rather than turning to pleasure-seeking to deal with it, the narrator accepts that we have to “tend to the void, don’t just fill it.”

Maybe the kids are all right after all.