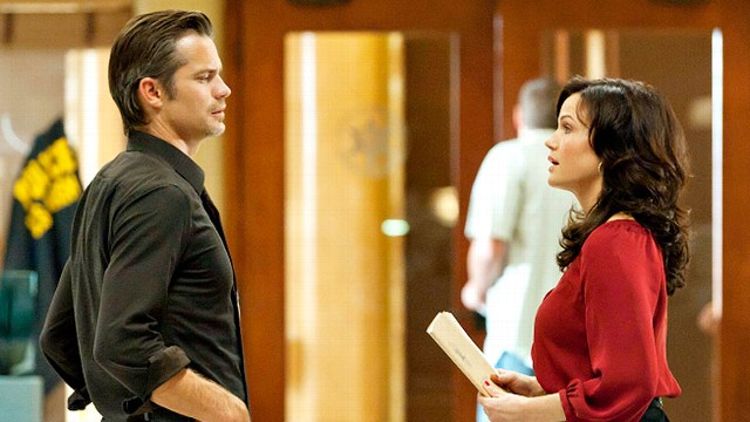 Last night’s episode of Justified was an example of why some newcomers find it a little hard to embrace the show initially. In the first episode we caught up with Marshall Raylan Givens, his ex-wife, current lover, and soon-to-be mother of his child, Winona, his fremesis, Boyd Crowder, and all the other characters, old (Art! Tim!) and new (guy from Detroit!). All the chess pieces were laid out. Then, this week, the game switched to checkers.

Season 2 got so deeply involved with the family drama (Raylan and Winona, Raylan and Boyd, Raylan and his father, etc.) and the Family Drama (Crowders vs. Givenses vs. Bennetts) that we sort of got away from the marshal’s office, Lexington, and the day-to-day justice, integrity, and service. Last season, especially toward the end of the run, one of Raylan’s main conflicts was what came first: the “marshal” or the “Givens,” family loyalty or his silver star.

This season, Raylan is just, you know, really trying to concentrate on his work, [Laura Dern voice] “trying” being the operative word there. Because while he has his phone off during a trip with Winona to get their first ultrasound, Raylan misses out on some big doings at the office: A fellow marshal has been murdered and it’s all hands on deck.

Raylan is paired with Karen Goodall, played by Carla Gugino. I’m not really interested in being the panting dog guy so I’m just going to say “Carla Gugino” again. Maybe a third time: Carla Gugino. She’s more or less reprising her role as Karen Sisco, a character she played on the short-lived television show of the same name and who was first made famous by Jennifer Lopez — in what is still her best-ever performance — in Out of Sight.

Goodall is now an assistant director of the service. In what is, frankly, a ton of information delivered in a very short amount of time, we learn that the murdered marshal was in charge of all the protected witnesses in Kentucky. Art goes to check in on one, a greasy extra from The Town named Terry Poe, while Raylan and Karen hunt down Poe’s most obvious enemies, led by a guy named Little Joe Dillahunt.

There’s some hitting of criminals with batons and punching of witnesses in the face with rag-wrapped-fists, but in the end Art finds out that Poe not only murdered the marshal but sold out some of his fellow protected witnesses.

One particular witness, Mary Archer, was party to some bad stuff done by a guy named Carlos Salazar. Salazar, acting off of Poe’s info, sends some guys in ill-fitting suits, who totally don’t look out of place in Kentucky, to cap Archer. Unfortunately for them, she’s being guarded by Marshal Rachel Brooks, who speaks softly, loves a cup of tea, and knows how to shoot a bad guy in the melon with a semi-auto. Art and Raylan play the cavalry to help Rachel out of a jam and all is quiet on the western front. Like all the other one-off Justified episodes, this one is wrapped up cleanly in 40 minutes or so.

Meanwhile (meanwhile!), Boyd Crowder is in the clink, following his beatdown of Raylan in the marshal’s office. Turns out he’s gotten himself busted just to put a sharp object into Dickie Bennett’s throat, thus avenging Ava’s near-murder. But, as is usually the case with Boyd, his motives are at once principled and craven; what he’s really interested in is Dickie’s mom, the late Mags, and her squirreled-away fortune.

Guarding said nest egg (accrued via Mags’ marijuana and holler-bodega empire) is a man named Limehouse, played by Mykelti Williamson. Because he is a villain written in the post-Hannibal Lecter era, Limehouse gives a very ornate monologue to introduce himself. We find him, in the middle of the night, in the middle of nowhere, carving up a pig and lecturing an unfocused soldier about sleeping on the job. The lesson we learn from all of this? Don’t fuck with Bubba Gump. I’m sure it’s something Raylan (and Boyd) will learn the hard way.

A couple things about this episode:

MVP: Art Mullen. Nick Searcy can pretty much do whatever is asked of him. Spar with Olyphant? Sure. Get his hands dirty with some action? No problem. He’s basically the laconic, wry version of the weathered police captain (see Beverly Hills Cop‘s Inspector Todd, then give him some Xanax and bourbon). Toward the very end of this episode, Searcy does a ton by barely doing anything at all. When Raylan asks Art if he’s OK, after a marshal of similar age and stature has been brutally gunned down and Art has pushed the law to draw a confession out of the perp, Searcy’s delivery of the line, “Sure … why wouldn’t I be?” says everything that needs to be said. It’s no wonder Jeremy Davies (who plays Dickie Bennett) is on the record as saying, “My kingdom for one cartwheel through Nick’s scenes.”

Best Line: “Well, Raylan, you’re talking to a man who’s sleeping with his dead brother’s widow and murderess, so if you’re looking for someone to cast stones at you on this matter, I think you’ve picked the wrong sinner.” —Boyyyyyyyyd

Hat Content: Real mellow. After last week’s elevator hat-off, they kept it real cool in the hat department. Lots of scenes where Raylan barely even wears a hat.

Raylan’s Love Interest Threat Level: Mild. Considering the fact that Winona had to ump a Wild West Draw between Raylan and a guy named Ice Pick last week, pretty cool. But Winona better sleep with one eye open whenever Karen Goodall is within state lines.

State of Boyd Crowder’s Soul: Self-aware. Boyd has the ingenuity to get his own ass kicked by a bunch of African-American cons in the yard by showing off his white power body art. He might invoke the Rose of Sharon when he greets Ava following his release from prison, but don’t get it twisted. Boyd’s more interested in being a money changer than a savior.

F-Yeah, Ava Crowder: I’m still getting used to Ava-as-Boyd’s-girl. But one thing she does seem more of natural at is being a crime queen. Joelle Carter gives Ava just the right sparkle to her eye when Boyd tells her about Mags’ fortune.

Villain of the Week: Limehouse’s mute muscle with the lye-burned hand. I’m calling Bill Barnwell and putting money on this dude. He’s bad.