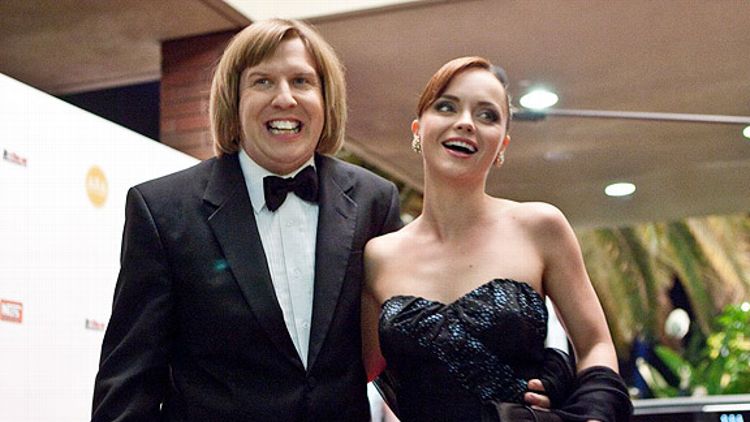 When did we first realize that Bucky Larson: Born to Be a Star might be something special? We admit it, we came to the movie late. It doesn’t even appear in our first Worst Picture predictions, made back in July. But, like every Razzie expert out there, we found ourselves hearing more and more whispers about it as the summer progressed. Last month we ran into one of our best studio sources — let’s call him “Jeffrey Katzenberg” — at a party in the Valley, and he sidled up to us and whispered, “I got two words for you: Bucky. Larson.”

Well, 94 brutal, horrifying minutes later, we knew it did. And so we’ll put our wager down against anyone and predict right now, September 15, 2011: Bucky Larson will win Worst Picture at the Razzies.

What makes us so sure? Here are 10 scenes that tell us Bucky Larson has the right mix of no-good awfulness and mortifying stupidity and B-list actors doing far from their best work to become a Razzie champ.

1. The scene in which a guy smears peanut butter on his genitals and has his pet goat lick it off. (Note: This is the first scene of the movie.)

2. Bucky trying to whistle to a songbird outside his window and spit dribbles between his buckteeth and down his chin.

9. Christina Ricci, as Bucky’s waitress love interest, delivering a heartfelt tragic-backstory speech over swelling music about how one time she dropped a tray and burned an old lady with soup.

10. Coming to the realization that Don Johnson is still a very handsome, charismatic man, which makes his appearance in this film even more tragic.

BONUS! 11. Feeling totally terrible and gross walking out of the theater afterward.

Who else might get nominated? I think Bucky Larson has a legitimate shot at nine Razzie nods. Worst Picture, Worst Director (Tom Brady [not that Tom Brady (despite what his IMDb video page suggests)]), Worst Screenplay, of course. Worst Actor for star Nick Swardson seems like a lock. Christina Ricci is actually the best thing in this movie, but she’ll be nominated nonetheless. Don Johnson should get a nod for Supporting Actor, and Kevin Nealon is both awful enough and just famous enough to land one, too. Worst Screen Couple, sure. I even think this movie could be a dark horse in Worst Prequel, Remake, Rip-off or Sequel, if voters realize it’s a rip-off of Boogie Nights.

But will they realize? Will voters know? To some extent, that’s up to Columbia Pictures and the campaign they’re almost certainly planning in their offices this very second. But it’s also up to you. Nothing makes Razzie magic like word of mouth, so stop just reading RazzieWatch and get out there and see a movie! I know I’m glad I did.

Reviewers are lining up early to get their shots in at I Don’t Know How She Does It, perhaps because they’re worried that all the good “I Don’t Know How …” jokes will be taken if they wait. “I don’t know why she does it,” Lisa Schwarzbaum writes of the movie’s star, Sarah Jessica Parker. “What I don’t know: why these movies keep getting made,” the Voice’s Melissa Anderson gripes. On the other hand, MSN’s Kat Murphy steers clear of the gag and instead unleashes one of the most enjoyable spittle-drenched tirades we’ve read all year, in which she calls IDKHSDI “toxic drool masquerading as a comedic paean to working moms” and “a cliché-ridden, misogynistic mess,” and straight-up calls Sarah Jessica Parker “horse-faced.” It’s the kind of vicious pan that can give a previously unheralded movie real Razzie heat.

Look, I get it. We Bought a Zoo is quality up and down the line. It’s got Matt Damon and Scarlett Johansson in it. It’s directed by Cameron Crowe. It’s 20th Century Fox’s big awards hope this year. It’s inspirational and funny and everything. But seriously, would you be at all surprised if, at the end of this trailer, a big credit appeared on screen reading “HAHAHAHA JK ACTUALLY DIRECTED BY GARRY MARSHALL”?