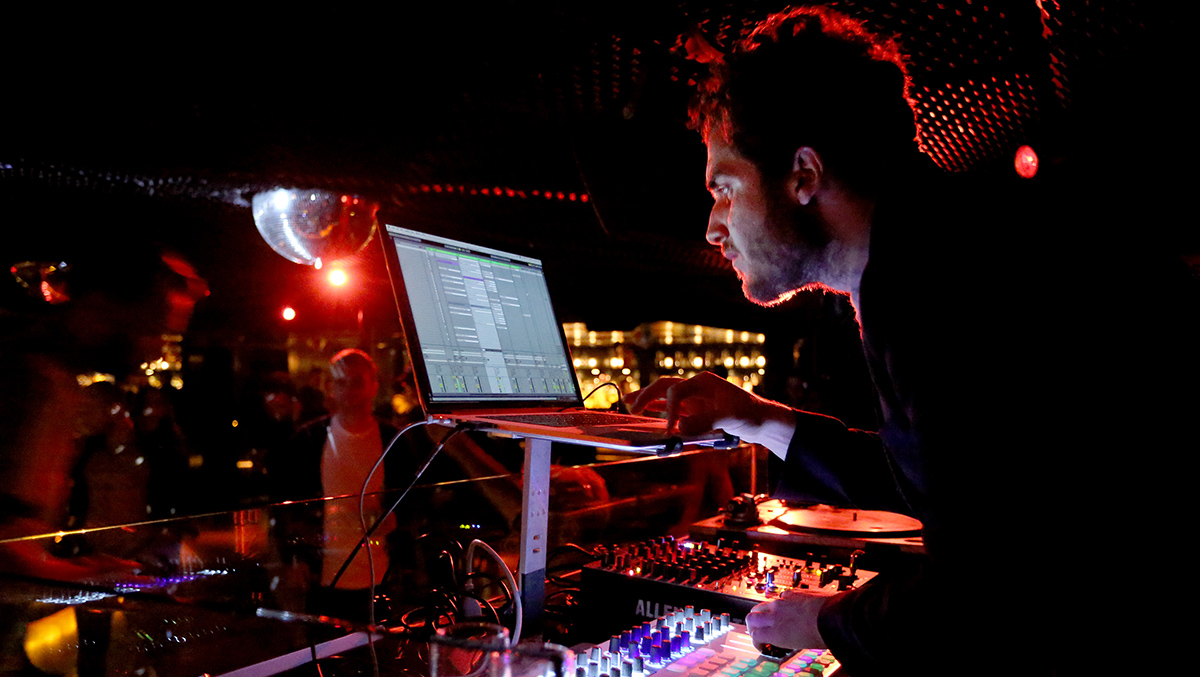 Nicolas Jaar is in perpetual motion. The 25-year-old electronic wunderkind isn’t one to look back, but we might as well. Since 2009 he has started an independent record label with his friends on his 19th birthday, then shuttered it four years later to start a new one; performed a five-hour improvised set at MoMA PS1; collaborated with Steven Spielberg’s daughter and the daughter of Bruce Willis and Demi Moore on two different songs; graduated from Brown with a degree in comparative literature; released a label compilation album housed in a freaking cube-shaped aluminum music player called the Prism; released two full-length albums, one as a solo artist and the other as part of the band Darkside with collaborator Dave Harrington, both critically acclaimed; remixed the entirety of Daft Punk’s Random Access Memories with Harrington, which isn’t a crazy thing to do at all. None of these things happened in 2015.

Jaar’s DJ set at the FYF Festival in Los Angeles this past weekend reaffirmed his continuous forward progress and served as an introduction to the ideas that have driven his whirlwind 2015. The show began with disembodied voices, muffled under reverb, with shrill, angular chime synths bouncing off the arena walls. The voices banded together:

Those voices came from a recording of the famous antiwar chant that rang out in Chicago during the 1968 Democratic National Convention, co-opted by other protest movements in the decades since. Then came the voice of Lydia Lunch, the outspoken champion of New York’s no wave movement in the ’70s. “My language is not silence,” Lunch’s voice, drenched in reverb, echoes. “My song is the scream.” Those hoping to get their dance on from the get-go were met with this sobering, dissonant opening act. The stage, then, was set. Everything is politics, and the dance is a weapon.

This year, Jaar released two EPs, Nymphs II and Nymphs III, in two months, the first releases he’s had as a solo artist since 2011. They’re among the best composed works in his catalog, striking the delicate balance between meditative soundscapes and triumphant, dance-club levels of release. Through his subscription-based record label Other People, he reissued Lydia Lunch’s spoken word album Conspiracy of Women, and will soon release a compilation of Lunch’s live concert acts from 1977 to 1979. But 2015 has really been the year he’s established himself as a soundtrack artist.

In February, he composed an alternate soundtrack to the 1969 Armenian surrealist film The Color of Pomegranates, spending two days taking ambient music he’d made in the past and syncing it to the disjointed narrative of the movie. In March, Jaar worked with Gil Scott-Heron collaborator Brian Jackson to remix “Winter in America” for the soundtrack of “Eleven Times,” a short video galvanized by recent events of police brutality in New York. The title is a direct reference to the number of times Eric Garner is heard uttering his final words, “I can’t breathe,” in the video of his detainment. The sharp string synths jut out in clusters — leaving a bed of nails for Jackson’s subdued voice.

In what could end up the jewel of his year so far, Jaar was brought on to score the French director Jacques Audiard’s latest film, Dheepan, about three Sri Lankan refugees who pose as a family in France to escape the civil war being waged back home. Dheepan took home the Palme d’Or, the most prestigious award at the Cannes film festival. In Wesley Morris’s review of the movie in his Cannes diary, he notes that “Audiard likes changing the movie he’s been making into something else,” but that “the abruptness of it gives you whiplash.”

Jaar’s work in this capacity, on these specific projects, makes sense. As a senior at Brown, Jaar found himself drawn to a very broad idea found in French philosopher Jacques Derrida’s 1993 book Specters of Marx: do away with past, present, and future; think about progression in a spacial manner instead of a linear one. Pomegranates navigates through nonlinear scenes; Dheepan changes its identity entirely over the course of Audiard’s movie. Jaar’s live sets have a similar form. He toys with his audience’s sense of anticipation. Enormous drops lurch from droning dead space. Sometimes there is no crescendo; sometimes the beat builds up to silence. His music is sprawling, and half of the time it doesn’t even sound of this world. But it’s also extremely intimate. There is warmth in the way the music bounces between the temples, how it echoes and clatters, how Jaar’s own voice, masked under layers upon layers of effects, reverberates.

The last time I’d seen Jaar was in the same arena. Darkside performed at last year’s FYF Festival, only one week after announcing that the band was coming to an end. They released one of the best albums of 2013, Psychic, with a sound that I can only describe as downtempo extraterrestrial cowboy prog-funk. Jaar and musical partner Dave Harrington shared the arena stage in darkness. Above them hung an oscillating, mirror-like disc that refracted light into an overwhelming beam, washing over the crowd from left to right throughout the entire concert. The lighting turned their silhouettes titanic. The stage glowed with violent hues of yellow, orange, and red. Signifying the end of the show (and the end of the band), Harrington took his guitar and cratered the hanging disc, like an ax to the bat signal.1 I walked out of the arena only to realize it was still light out. I felt like a fetus.

His DJ set this past weekend made more sense. Woven into the bizarre mix of antiwar chants, ominous drones, and boisterous gospel songs were disco and house tracks from the ‘80s. This was supposed to be a dance party, after all. Jaar played Geraldine Hunt’s classic “Can’t Fake the Feeling,” and sampled “Love Honey, Love Heartache,” a 1986 house record from Man Friday, of which the legendary DJ Larry Levan was a member. In his New Yorker column on Jamie xx, Grantland contributor Hua Hsu noted that “there comes a moment in many artists’ careers when they stumble on the secret weapon that is the past.” The rise of disco was largely powered by communities embracing a time of racial and sexual liberation; its downfall stemmed from a more widespread fear of the subculture. In an hour and a half, Nicolas Jaar wove a contemporary story by hopping around time and space. In that hour and a half, the dance floor became a church, a site of protest, and a place of communal healing. Not that it ever wasn’t all those things in the past.

'Hard Knocks: Houston Texans': Clowney Is Back, a QB1 Is Named, and NASA Is Real