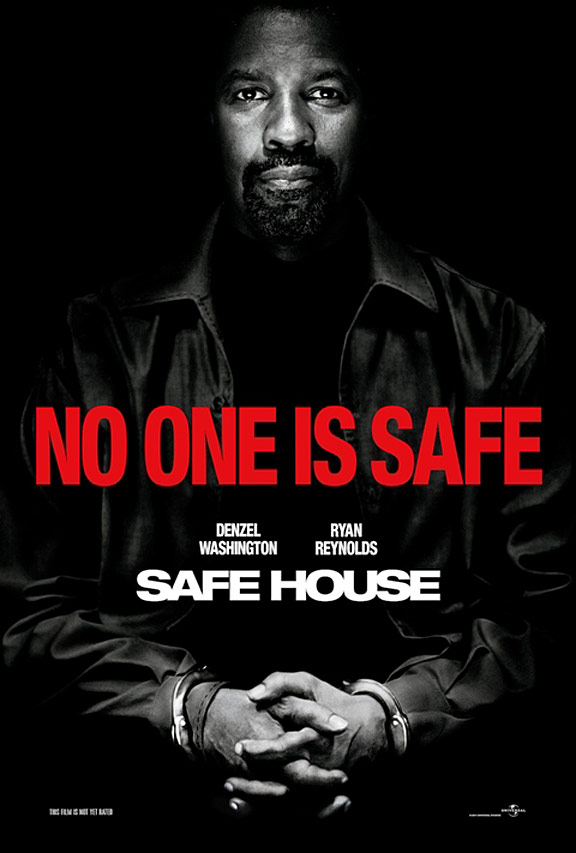 What the art says: DENZEL WASHINGTON IS IN THIS MOVIE! That’s all Universal wants you to take away from this. Sure, if you look hard enough you’ll notice Denzel’s wearing handcuffs and therefore likely the reason that “No one is safe.” But that’s secondary — only there for those with enough self-discipline to look away from Denzel’s piercing eyes. It’s also worth noting that even though A-lister Ryan Reynolds is in the movie, he gets no face time. Reynolds‘ career must really be on the skids, since Universal didn’t even let him stand in the background like so many of Denzel’s previous costars (see: Ethan Hawke, Dakota Fanning, Russell Crowe, Angelina Jolie).
What the text says: Eighty percent of people who see this poster at the multiplex are going to say to their friend, “Oh, I want to see No One Is Safe!” Because holy hell, that’s one prominent tagline. Otherwise, not many words at all.
Tagline: “No one is safe” is punchy, it plays off the name of the movie, and it makes the person reading it say to himself, “Even me? I’m just some moviegoer. Surely I’m safe in the theater … right, mom?” Maybe that’s why it’s been used so many times before. 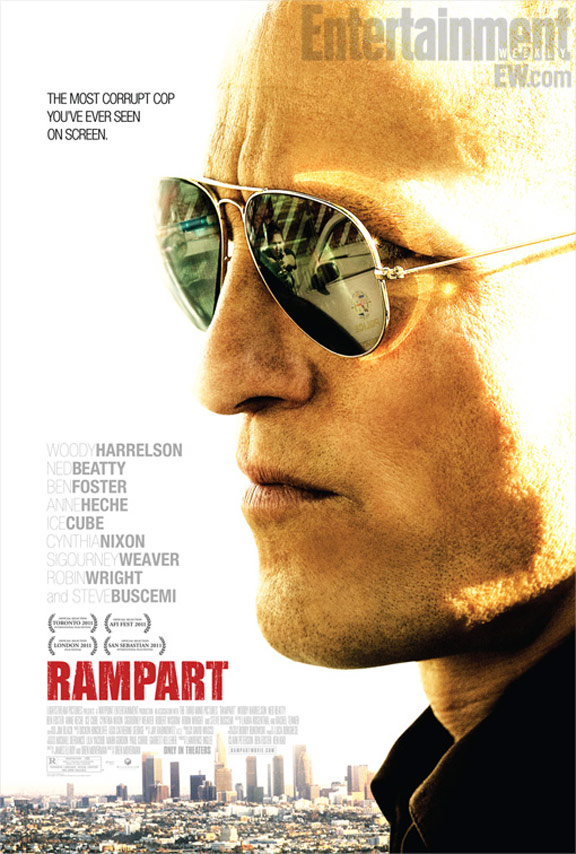 What the art says: Woody Harrelson is going to have a killer sunburn. And he’s mad. Those pursed lips, that furrowed brow, those cops pointing guns at him that he’s not at all concerned about — all signs of a man on edge. Which is exactly what Harrelson plays in Rampart, about a corrupt cop in … hmm. What city was it? Oh wait. L.A.! Of course. Thanks totally superfluous skyline that 99 percent of the people who see this poster won’t be able to identify.
What the text says: Ice Cube is finally getting some respect! Seriously, this movie has a long list of good actors and actresses in it and Cube falls right in the middle. Higher billing than Sigourney Weaver? At least he didn’t score the coveted “AND” credit, which goes to the always–deserving Steve Buscemi. Also, that stuff below the actors’ names and above the movie name? It means this thing won film festival awards of some kind.
Tagline: “The most corrupt cop you’ve ever seen on screen” follows in the grand tradition of those Scary Movie movies with self-referential taglines. Weird, right? Wouldn’t most movies just go with “The most corrupt cop you’ve ever seen”? Our guess: This is a tacit acknowledgement that while Woody’s character in Rampart is a bad dude, he’s not as bad as this guy. 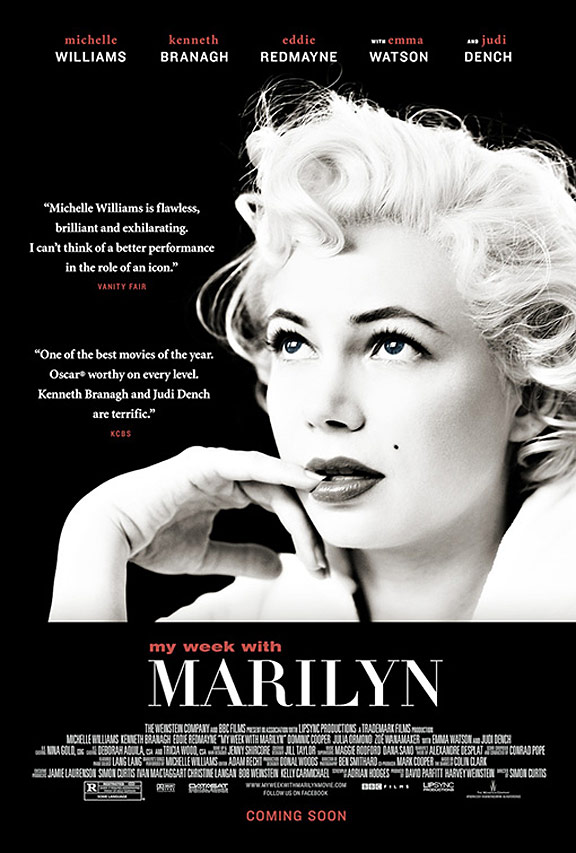 My Week with Marilyn

What the art says: Michelle Williams is a pretty convincing Marilyn Monroe. And the Weinstein Co. is pretty convinced she’s getting nominated for an Oscar. That’s why they got renowned French photographer Brigitte Lacombe to shoot the portrait for this poster. That kind of thing means something to stodgy, old Academy types.
What the text says: Vanity Fair and KCBS finally get to share some poster space. Vanity Fair, of course, makes sense. This poster could easily be the cover of the dead-celeb-loving magazine. But KCBS? And with a blurb that shouts-out the co-stars? I don’t get it. Credit watch reveals short-haired British cutie Emma Watson snagged the “WITH” credit and short-haired British cutie Judi Dench got the even better “AND.” All told, a good day for short-haired British cuties. 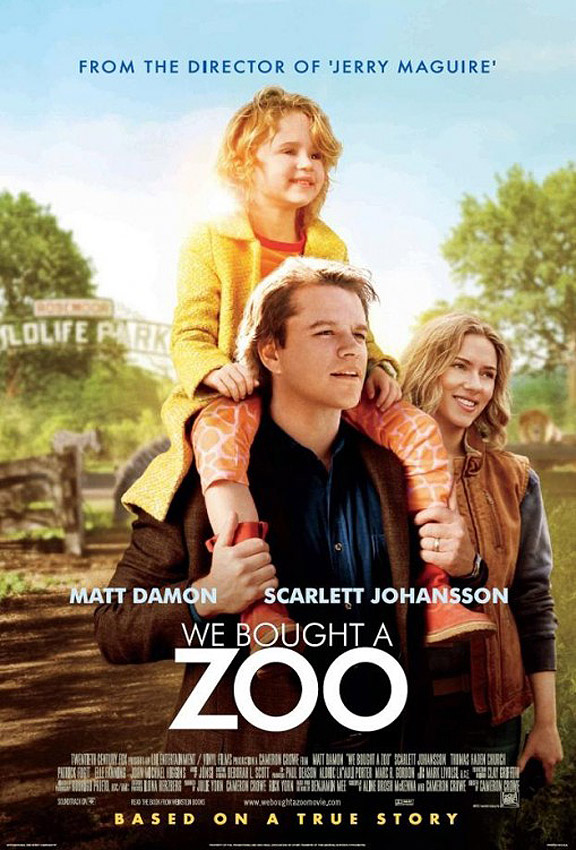 We Bought a Zoo

What the art says: This is one hell of a happy family in one hell of a colorful world. Really, there’s no surer indication of a “happy family” than a kid on dad’s shoulders. The lack of animals on this poster (save for that blurry lion stalking ScarJo) should be an indication that this movie, though about a zoo, is not really about the animals. It’s about the people. Gorgeous people.
What the text says: Who wants to bet they take “Based on a True Story” off the next version of this poster? Why? Because it immediately made us, and we’re guessing others, think of that crazy dude in Ohio whose exotic animal collection escaped and had to be murdered in the streets (or as Jack Hannah called it, “the Sept. 11 of the animal world.”) Also, color us surprised that Cameron Crowe doesn’t get a shout-out by name. It’s the man’s first movie since 2005! What he does get though is “From the director of Jerry Maguire.” Probably makes more sense than Vanilla Sky or Elizabethtown. Plus, can’t you just imagine Johnny Q. Moviewatcher saying to himself, “A precocious-looking kid and the guy who did Jerry Maguire? Translation: catchphrases and interesting facts about the human body? I’m in.”

Filed Under: Movies, Poster Decoder, Posters, We Bought a Zoo