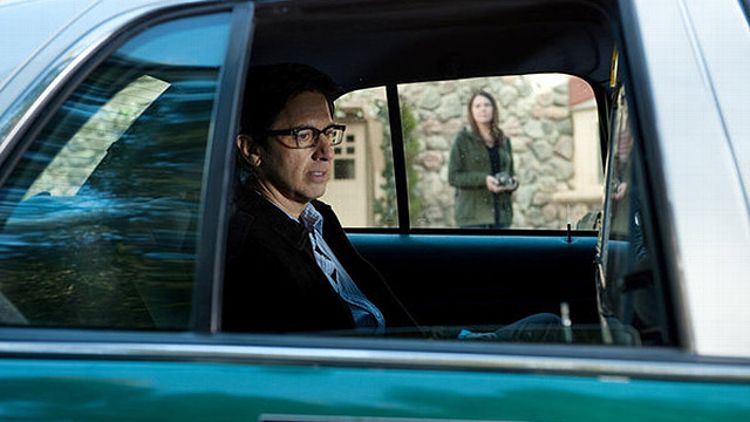 I had an epiphany this week: I’m an NBC fan. Not only do I advocate for Parenthood, but I’ve been with The Voice since day one, and I’ll continue watching Ready for Love even though it’s a total mess. (NBC fans are hard to come by these days, so I wanted to make sure you were aware. Can you really afford to lose anyone else? Remember, I’m firmly in the 18-35 demographic.)

As always, when you make the right choice and renew Parenthood, here are some story lines for the writing staff to consider.

Get Ray Romano Back on the Show

Litman: At the end of Season 3, Sarah Braverman (Lauren Graham) had been relegated to two kinds of story devices: She was looking for meaningful work (e.g., the time she decided to become a playwright) or she was in an ever-shifting love triangle with Jason Ritter’s character, the teacher Mark Cyr, and various third parties, including her ex-husband and her daughter who initially had a thing for Mr. Cyr. In Season 4, Ray Romano joined the show as curmudgeonly Hank, and he became the vehicle uniting the major strands of Sarah Braverman. She became a successful no. 2 to Hank in his photography business and she fell in love with him while still engaged to the aforementioned Mr. Cyr. Sarah’s character did not quite deepen, but anything problematic about that was obviated by the wonder of Ray Romano.

Hank Rizzoli needs to stay on this show. When we last saw him, he had just moved to Minnesota to be close to his daughter, but Jason Katims says the door is not closed on Romano’s return. He must be an expensive actor on top of this expensive ensemble cast, but TPTB must know that he’s worth it.

How will he make the move back to Berkeley? Hank’s likeability is the result of a number of factors, but central to it is his attachment to his daughter Ruby. His stock would plummet if he abandoned his daughter for the unreliable Sarah Braverman. Thus the only plausible scenario is that Hank’s ex-wife dies, so he and his daughter move back to California, where they have many more ties. Yes, this is morbid, but the upside is tremendous, especially for Sarah.

Sarah already began to bond with Hank’s daughter using some impressive Photoshop trickery. Nothing wins over a young girl like Photoshopping Justin Bieber into a photo! Ruby won’t accept Sarah as a surrogate mother so quickly, but the basis for the relationship already exists. Sarah would have to act in a selfless way that we don’t often see, and it can function as a redemption story for her. As Sarah begins to act selflessly with Ruby in a way she never could with her own kids, Amber and Drew get angry with their mom. Fortunately, because they are much older than Ruby, the show doesn’t have to dwell on the Holt kids’ problem with Hank’s daughter. Ultimately this is a Braverman issue, with the bonus of keeping Ray Romano on the show. And of course, the cry moment comes at the end when we get another scene of Amber and Drew tearfully confronting Sarah. We haven’t had one of these since their dad (played by John Corbett) was on the show, and I think it’s time.

Jacoby: Minka Kelly is like sunshine, money, and sleep: You can never have too much of her. That said, having her character, Gaby, reprise her role in the Braverclan as the target of every happy Braverman husband’s wandering eye would be hackneyed. I mean, Gaby is so much more than that. Gaby is complex, Gaby is … Who am I kidding? Gaby was created to be the third, short side in the Braverboys’ fantasy love triangles, and she isn’t about to stop in Season 5. She’s just switching generations.

What do we know about Gaby? She is responsible, reasonable, good with children, and looks a lot like America’s favorite daughter of Dillon’s car dealer. Gaby is a helper. For whatever Freudian reason, Gaby is always there for those in need. Monday through Friday she works with developmentally disabled children, but even on her weekends she volunteers at soup kitchens, shelters, and … the VA. When she and Zeek first run into each other at the coffee and cookie table, it’s awkward. Zeek sheepishly shows her how to make the coffee. It isn’t easy to get the right water-to-grinds ratio, so Zeek shares his technique but does not recognize that they know each other. She finds that odd but keeps it moving, adjusting the Mint Milanos. Later, when she shares a laugh with Ryan about creamer, Zeek takes notice. As Gaby puts her hand on Ryan’s shoulder, the camera rack-focuses to a disapproving look from Zeek in the back of the room.

That night, as Zeek and Camille (if they haven’t killed her off yet) lie in bed, Zeek mentions that he saw Gaby helping out at the VA. Camille, ever curious and suspicious about the Max-whispering, Crosby-bedding temptress, asks a few follow-up questions that eventually lead to Zeek suggesting that Amber “keep an eye on Ryan.” Camille takes note and then does that clichéd TV thing where she simultaneously says goodnight and leans over to turn off the bedside lamp. This never happens in real life.

The next weekend at the VA, facility Gaby brings doughnuts — those fancy doughnuts that look all bumpy, like they were made in a kitchen instead of a factory. Of course, the veterans are pleased. Through her adult life, Gaby has employed deep-seated denial to remain oblivious to the fact that men view her like someone on Survivor views cheese fries. Her abundance of do-good-ocity is counterbalanced by her lack of street smarts. When some of the military bros make comments that military bros make to Lyla Garrity look-alikes, Gaby is unaware, but Zeek is unhappy. He pulls Gaby aside to tell her that she shouldn’t stand for that treatment, that she needs to stick up for herself, and that if she ever feels uncomfortable she can come to him. She thinks this is sweet and gives him a double-arm hug with a back rub. As Gaby releases from the hearty hug, the camera catches a disapproving look from Ryan in the back of the room.

The next scene is at one of the backyard Braverman barbecues they always seem to be having. Under the glow of string lights and over an Eagles B-side with the drinks flowing, Zeek adjusts the sprinklers, Crosby holds court, and Max chases his cousins. All is well. While waiting for Adam to finish grilling up (free range) chicken breast, Ryan and Camille have a moment alone. Camille asks about Zeek and how he is getting along at the VA facility. Ryan describes what a help he’s been and how his enthusiasm has picked up of late. Just as he’s about to grab his plate of chicken from Adam and walk away, he makes a quick quip about how Zeek’s enthusiasm might have something to do with his new colleague: Gaby.

Camille isn’t upset. She’s a veteran in her own way. She used to be quite Gaby-ish herself years ago and she’s seen three generations of Braverman men follow the songs of Gaby-like sirens. She knows that the Braverboys are merely fantasizing, window-shopping at stores they can’t afford. And, since she never does anything to advance a story line, Camille just gives Ryan her signature, maternal, condescending, knowing glance and says, “It’s nice to have her back in our lives after what happened with Crosby.” She then smiles at the confused/jealous look on Ryan’s face as he walks off in search of condiments. She rolls her eyes and sees Drew by the guest house listening to Amber strum her guitar. Camille knows that it is only a matter of time before Gaby casts her spell on him, too, but that can wait until Season 7 — if Juliet and I don’t kill him first.

Diddy and Kate Upton May Be Dating Each Other