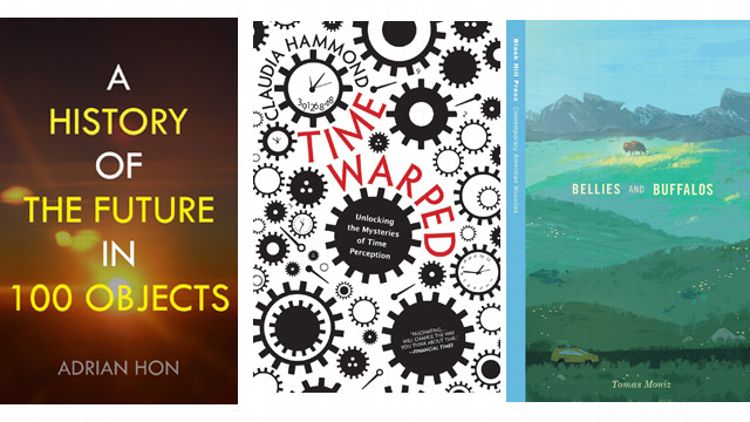 A History of the Future in 100 Objects, by Adrian Hon

Riffing on Neil MacGregor’s A History of the World in 100 Objects, which took everyday items and described human history through them, Adrian Hon has imagined the next century through future technologies. In the next 10 years, Hon sees an algae-based replacement for petroleum, “smart drugs,” and a new iteration of animated GIFs; by 2079, there will be Olympic games for augmented humans, space station colonies, and a cripplingly addictive version of Farmville.

And like all good sci-fi, Objects has as much to say about today as it does tomorrow. In fact, all 100 objects are future iterations and extrapolations of technology, ideas, and trends that inhabit our present. It’s the age-old question that science fiction asks: How afraid should we be of the way things are going?

Although he exhibits plenty of skepticism, Hon is optimistic at heart. His imagined future is one of technological innovation and social betterment. With so much speculative fiction predicting doom and gloom over the next century, it’s refreshing to see such hopefulness. This is the Jetsons’ future, one that’s bright and beautiful and very, very shiny.

“Utopia is not a place,” Hon writes. “It is a process of unending struggle, hard fought and hard earned, to make a more perfect world.”

French explorer Michel Siffre spent two months in complete darkness, secluded in an underground ice cave in the French Alps. He was to be completely isolated for 1,500 hours, with the goal of seeing if his internal clock could keep track of the time. Outside the cave were two research assistants, whom he could contact by phone but who were not allowed to give him any hints about the time of day. He would call them every time he woke up, assuming it was morning. Claudia Hammond writes, “By the second morning Michel was already two hours off-kilter. Within a week he was two days behind reality. Within 10 days he thought night was day and even noted in his diary that with their cheery ‘Hellos’ the team sounded as though they’d been up for hours. In fact he had woken them yet again in the middle of night.”

This experiment would lead to the establishment of chronobiology, the study of the effect of time on biological rhythms. Hammond’s Time Warped is full of stories like Siffre’s. This past century, we’ve sought to make sense of time: how we perceive it, how our brains apprehend it, how we feel it.

As it turns out, we understand very little. No part of the brain exists to measure time, and none of the organs in our body was made to count. Hammond believes time is a perception we create ourselves “based on the neuronal activity in our brains with input from the physiological symptoms of our bodies.” That is to say, time is inferred through everything else our body does. Consider it a deductive sixth sense.

Although occasionally stuffy, Hammond tackles a lot of heady research and theorizing with a light touch. Time Warp speeds along with a bold curiosity and nerdy enthusiasm that are hard not to internalize. It’s a quick read. Or at least I perceived it that way.

TL;DR: Times they are a-mazin’.

Bellies and Buffalos, by Tomas Moniz

I’m not sure I’ve ever read a road-trip novel where the destination was Denver, but I’ve also never read one with the humor and sympathy of Tomas Moniz’s Bellies and Buffalos. Sonny Gutierrez is a middle-aged guidance counselor, headed on a whim to Colorado to meet his son for the first time. It turns out the baby he and his then-girlfriend Pilar gave up for adoption when they were 16 never made it to the orphanage; Pilar has been raising him this whole time.

In the passenger seat is Julia, 22 years old and eight months pregnant, headed to Denver to see her parents. She’s the sort of flippant oddball who might, after stealing a package of Tums at a gas station, then walk back in to ask to use the restroom. (This is the first thing that happens in the book.)

Julia’s belly isn’t the only one of concern in the book, as Sonny becomes obsessed with his own stomach, which now juts out far enough that he can’t see his own penis — a hilarious symbol of his aging and his dwindling masculinity. Moniz moves through many moments like these, exploring parenthood and middle age in Bellies and Buffalos‘s slim 130 pages.

Without spoiling anything, it’s probably no surprise to say that what Sonny finds in Colorado turns out to be very different from what he expected. In a lot of ways, Bellies and Buffalos feels like a classic travel narrative. As with all road-trip stories, the story here is more about traveling than it is about the destination — the long stretches of open road give one time to think, to reflect, to empathize.

TL;DR: What to expect when you’re expecting things to work out differently.

Notable Overlooked Nonfiction
• Spam: A Shadow History of the Internet, by Finn Brunton
• Big Data: A Revolution That Will Transform How We Live, Work, and Think, by Kenneth Cukier and Viktor Mayer-Schönberger