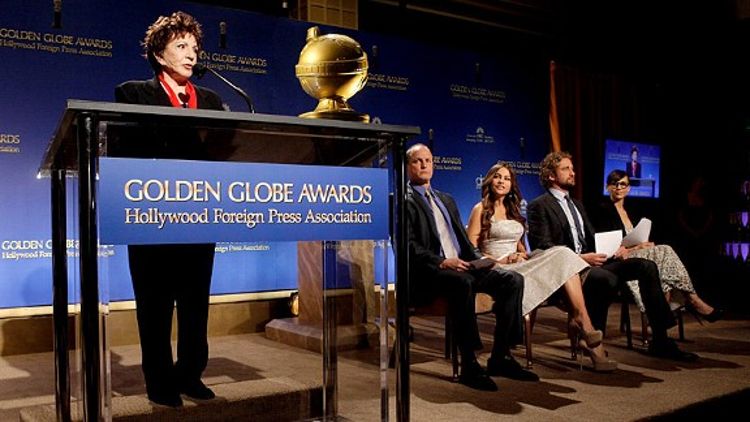 Just before today’s 5:30 a.m. press event announcing the Golden Globe nominations, a Hollywood Foreign Press Association arranger wearily droned into the microphone, “We’re three minutes away. Can we get talent back in the room, please?” Dude, it’s the Globes: Talent was never in the room. And talent, taste, even the movies themselves seemed to have little to do with the relentless blare of nomination announcements — the Broadcast Film Critics Association Critic’s Choice nominations on Tuesday, the Screen Actors Guild nominations on Wednesday, the Globes this morning — that made every day feel like Christmas. That is, if what was under the tree included several empty boxes and a couple of immaculately wrapped turds.

In the scheme of Oscar campaigning, this was Actor Week — a three-day stretch during which the four acting categories were supposed to be clarified by what are commonly referred to as the precursor awards. The thinking is that performers who place well right now are in, and that those who don’t will be watching the Oscars from home. And here’s some truth to the notion that these nomination lists are predictive, but that’s mostly because they want to be, and so they tend to predict the obvious.

For those keeping score, here’s a look at their success rates. SAG — which, like the Oscars, nominates just five actors per category — has matched up most closely with the Academy over the last five years, hitting an average of 17.6 out of 20 nominees correctly. The BFCAs, which hedge their bets by nominating 6 actors per category, trail slightly with a five-year average of 17 for 20. And, despite the fact that the Globes nominate a total of 30 actors and actresses every year, on average they get only 15.8 out of 20.

So nobody is doomed quite yet. But right now, a lot of actors are wondering whether they are Javier Bardem or Mila Kunis. Bardem’s performance in Biutiful last year didn’t manage to score a single Best Actor nomination from these three groups and nonetheless went on to be recognized by Academy voters. Kunis, on the other hand, swept the board with Best Supporting Actress nominations for Black Swan and still didn’t have enough traction for an Oscar nomination. Fate is kind except when it’s cruel. So, while we wait, here are a few ways to organize your tipsheet.

Who needs a miracle?

Take Shelter’s Michael Shannon went 0-for-3 this week, despite giving a great performance that has already won him three Best Actor awards from critics’ groups. What the hell? Well, it’s a good bet that most SAG voters didn’t see the movie — 2100 actors are picked by lottery from the Guild’s immense ranks as nominators every year, which means that an awful lot of these decisions are being made by people who took an axe to the face in a Friday the 13th movie 25 years ago but haven’t done meaningful work since yelling “Leggo my Eggo!” in an ad that now airs only in South Korea. Which explains why SAG’s best actor list — George Clooney, Brad Pitt, Leonardo DiCaprio, Jean Dujardin, and Demian Bichir — reads a lot like they came up with it by looking at predictive blogs like this one and reading “For Your Consideration” ads rather than, you know, considering the work. (The one outlier, Bichir, is not such an outlier when you consider that his touching illegal-immigrant drama A Better Life was the first Oscar screener to be mass-mailed three months ago and that the “I feel sort of guilty that I don’t do IRS withholding for my gardener” demographic is actually pretty big in L.A.)

As for why Shannon didn’t figure in the Globes, never, ever try to explain the reasoning of a group that would give Gnomeo and Juliet more nominations than The Tree of Life. And the fact that he was ignored by the Broadcast Critics? I can’t explain it. But two years ago, I attended their awards ceremony as a reporter and interviewed about a dozen members for a story I was writing. Most of them were bright, engaged people who genuinely cared about movies, and one by one, they each, separately, shared with me their conviction that everyone else in the group was a complete idiot. So let’s work with that theory for now.

Shannon can take comfort in the fact that in recent years, one of the very few people to break the 0-for-3 hex and head for the Oscars was…Michael Shannon, for Revolutionary Road. The rest of the actors who were blanked this week — Tinker, Tailor, Soldier, Spy’s Gary Oldman, Rampart’s Woody Harrelson (the victim of a half-assed release, Woody good-naturedly shrugged the whole thing off at the Globes announcement), Melancholia’s so-deserving-but-it’s-just-not-happening Kirsten Dunst, Extremely Loud and Incredibly Close’s Max Von Sydow and Coriolanus’s Vanessa Redgrave — will be praying for a sudden change in fortune.

Wait. Scratch that. It’s my heartfelt hope that at this point in their extraordinary careers, Von Sydow and Redgrave are so far past giving a crap about stuff like this that they don’t even know these nominations happened. I can dream, right?

Not a soul until nomination morning. But — aside from the unfortunate Mila Kunis and A Mighty Heart’s Angelina Jolie (note to self: investigate why Oscar voters hate full-lipped brunettes!) — everybody who’s gone 3-for-3 in these prelims since 2006 has ended up at the Oscars. That bodes well for the following actors: Brad Pitt, Jean Dujardin, George Clooney and (though I’d say he’s still vulnerable) Leonardo DiCaprio. Among actresses, Viola Davis, Meryl Streep, and Michelle Williams all had clean sweeps; surprisingly, so did We Need To Talk About Kevin’s Tilda Swinton. For supporting actor, Beginners’ Christopher Plummer and My Week With Marilyn’s Kenneth Branagh were the only 3-for-3ers, and among supporting actresses, The Help’s Octavia Spencer and The Artist’s Berenice Bejo now have spotless records — as does Jessica Chastain. Chastain, who appeared in six movies this year, has gotten a lot of well-deserved critical attention, but most of the awards have been for her body of work in 2011 (The Help, The Tree of Life, and Take Shelter). All of her nominations this week came for The Help, which may clarify campaign strategy and reduce (though not eliminate) the risk that she will cancel herself out in the category.

Contrast that to the case of Ryan Gosling, who managed to pick up three nominations this week, but for three different movies (Drive, The Ides of March and Crazy, Stupid, Love.) and is thus going to have to put in a lot of banquet time while not really having advanced in the Oscar race. Drive, as I’ve noted, has a lot of fervent partisans; the problem is that the movie appeals to a mostly male set of younger critics, internet film writers, and lovers of violent exercises in Eurostyle. They’re a heated bunch, and passion counts, but I’m still not convinced that there’s much overlap between their demographic and the Academy’s.

Apparently, it’s getting a little hot in the hothouse. 3-for-3 is great news, but just one miss can give you that not-so-fresh feeling. While reps for most of the 2-for-3ers (who include Michael Fassbender, Charlize Theron, Nick Nolte, Jonah Hill, Glenn Close, Melissa McCarthy, Janet McTeer, and Shailene Woodley) stayed cool, there was one exception. When Drive’s Albert Brooks, who has been cleaning up in Best Supporting Actor critics’ contests for the last few weeks, was passed over by SAG on Wednesday, one of the film’s publicists emailed a press letter so hilariously heated and spinny — the equivalent of shouting “NOBODY PANIC!!!!” — that it probably should have lived and died as an internal campaign memo. Calling Brooks’s omission “inexplicable” (actually, considering the generally elderly and conservative vibe of the SAG nominations, it’s way explicable), the memo reminded all of us to “take today in stride” and noted cheerfully that “we remain confident that the Supporting Actor race still boils down to a two-man showdown between Albert Brooks and Christopher Plummer.”

Whoa. Wait up there. Stay on your own side of the street! This brand of way-too-early handicapping bullshit is our job. But thank you very much for providing the list of the 19 past SAG nominees for Best Supporting Actor who failed to advance to the Oscars. We’re sure they appreciated the reminders as much as Jonah Hill, Nick Nolte, Kenneth Branagh and Caesar the ape were happy to hear from you that they’re now out of the running.

My favorite new wrinkle, though, was the unveiling of a TV commercial for The Artist, the likely Best Picture winner (I’m trying to stay calm and parcel out my distress gradually, but: Jesus, really?! This is actually happening?!) which will open more widely over the next few weeks. The ad, which is visually appealing and does capture some of the movie’s lovelier moments, touts its plentiful good reviews, but the one it picks to quote in voice-over, from The Wall Street Journal, is an especially odd choice: “The Artist sends you home with your head in the clouds.”

Um, okay. No argument. You do know that “head in the clouds” doesn’t mean the same thing as “walking on air,” right? That it is a synonym for “flighty” and “scatterbrained”? As an example of truth in advertising, this comes close to the greatest “For Your Consideration” ad of the last 20 years, for the 1994 alcoholism drama When A Man Loves A Woman. Pushing the film’s star for a Best Actress nomination, Disney ran a full-page picture of her in Variety adorned with a single, touchingly complete review quote. It said, in full: “Meg Ryan just doesn’t get any better than this.”

But let’s not end on such a grim note. There are still things to cheer. SAG recognized that Armie Hammer gave a smart, witty, committed performance in J. Edgar despite apparently having to wear a prosthetic head for the old-age scenes. Joseph Gordon-Levitt got a Globe nomination for 50/50; that’s as far as the campaign for his performance will take him, but it’s well-deserved recognition for his lovely, understated work. And Melissa McCarthy, despite an immense amount of predictable snobbery about women, comedy, and her interaction with a bathroom sink, might just end up as the first Judd Apatow player to score an acting nomination. So have faith! I’ll be back next week with 2011’s final Oscarmetrics column, a preview of one last twist in the run-up to nominations: Oscar voters are now going to watch the movies.