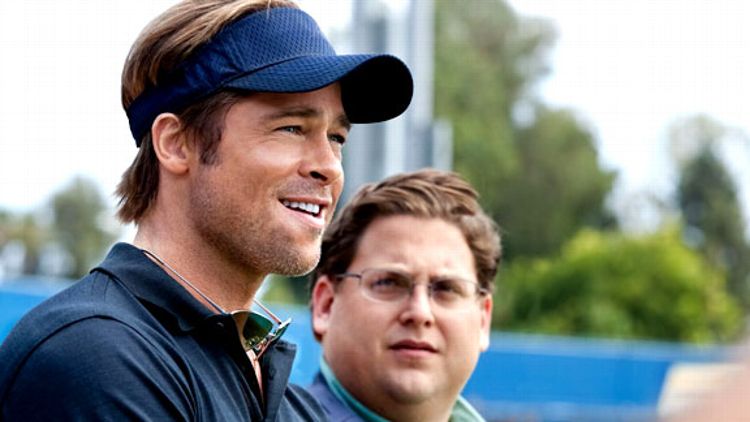 There is no official beginning to the fall Oscar race, but if there were, the arrival of Moneyball last week would be the equivalent of the starter pistol. Reviews for the movie — which, appropriately, opened on the first day of autumn — might be falling just a hair short of the zeitgeist-invoking ecstasies that greeted last year’s The Social Network, with which it shares a studio, a producer, a screenwriter, and a willingness to play fast and loose with its source material. But the critical reception has been more than good enough to put the movie on everybody’s long list for best picture, director (Bennett Miller), actor (Brad Pitt), supporting actor (Jonah Hill), and adapted screenplay (Steven Zaillian and Aaron Sorkin), at least until the rest of this year’s contenders open. I say long list, not short list, because right now, there’s no such thing as an Oscars short list. The best a potential nominee can do is to secure a spot atop a big roster of “maybes” and then hope that, over the next three crowded months, five more appealing candidates don’t materialize.

Which brings us to Brad Pitt’s big problem. Pitt is 47, a past nominee (for Twelve Monkeys and, more recently, The Curious Case of Benjamin Button), an undisputed movie star even in an era when almost nobody can agree on what “movie star” means, and an actor who is coming off a supporting performance in The Tree of Life that has already put him in the Oscar discussion (at least in the Oscar discussion I’m having with myself, and with you). He’s socially conscious, great with the press, and — except for a tendency to say something about Jennifer Aniston every few years that makes every woman in America want to give him an eardrum-popping face-slap — he’s well liked. In Moneyball, as Oakland A’s general manager Billy Beane, he holds the narrative’s center effortlessly while bringing energy and generosity to his interactions with a terrific supporting cast (Hill, Philip Seymour Hoffman, and Chris Pratt are all impeccable). In short, this is what some people are calling Pitt’s moment. And yet, to me, his road to a win is almost unimaginable; in fact, even his road to a nomination is challenging. The reasons are twofold: (1) This isn’t the kind of performance that the actors’ branch thinks of as capital-A acting, and (2) Pitt is not the kind of actor voters have recently been especially eager to nominate.

That’s not just a gut feeling; it’s a quantitative reality! In tribute to the bottomless appetite for statistical analysis that gives Moneyball’s protagonist one of his reasons for being — and also because after four weeks, I figure it’s time to justify the “metrics” part of “Oscarmetrics” — I did a little number-crunching to see if I could back up my hunch that this might not be an Oscar performance. Taking as my sample the past 50 nominees for best actor (from 2001 to 2010), I looked for commonalities in the roles that got them nominated. Six trends stood out:

Starred in a period piece set more than 15 years before the release of the movie: 24 out of 50 nominees.

Used an accent/changed his voice: 23 out of 50 nominees.

Underwent an impressive physical transformation and/or allowed himself to look like shit: 21 out of 50 nominees.

Miscellaneous showboat factor not quantified above (aged many decades on screen, played multiple roles, played someone with a physical or mental handicap, sang, etc.): 11 out of 50 nominees.

Died on screen: 11 out of 50 nominees. (This one’s an estimate based on memory, because despite my commitment to bringing you the best possible Oscar analysis, life is just too short to rewatch Venus to determine if Peter O’Toole’s character survives to the end. I barely survived to the end.)

If the role is the X factor, the Y factor is the actor himself, as represented in the interesting paradox that Oscar voters really like to nominate the kind of performer they think doesn’t usually gets nominated. To them, someone who appears to be an outlier is more interesting, more noticeable, and more fun to honor than a usual suspect. Let’s look at three of those groups:

Actors who had never been nominated before: 21 out of 50 nominees.

Veterans whose prime movie-star years are behind them (for the purposes of this analysis, I’m making 60 the minimum age of eligibility): 10 out of 50 nominees.

Collectively, the categories I’ve enumerated do not exclude anyone by definition. Even if a lead actor isn’t lucky enough to be a newbie, an elder, or a foreigner, he can still easily qualify for a nomination by playing the right kind of role in the right kind of movie. But Pitt’s performance — I don’t think this counts as a spoiler — doesn’t fit any of the Oscar parameters I’ve delineated. Billy Beane is still alive, the movie is more or less contemporary, Pitt doesn’t wear any special makeup or let himself look terrible (unless you count the Dockers), and although Beane is a real person, he’s not “famous” in any sense that allows an actor to score the kind of impersonation bonus points that voters tend to grant performers who take on Ray Charles or Richard Nixon or Muhammad Ali or Johnny Cash.

So how good are the chances of an actor who can’t check off any of those boxes? The bad news for Pitt is that of the past 50 best actor nominees, only three snuck in without meeting any of the aforementioned standards. The worse news for Pitt is that two of those three nominees were George Clooney, who bucked the odds for both Michael Clayton and Up In The Air (if you’re curious, the only other beneficiary of what we can now call, Robert Ludlum-style, The Clooney Exception was Will Smith for The Pursuit of Happyness). And the worst news of all for Pitt is that when you look at his prospective competitors, they all sound prototypically nominatable. Leonardo DiCaprio in J. Edgar? Famous person, period piece, ages decades, uses an accent, maybe even dies. Jean Dujardin in The Artist? First-time nominee, non-American, period piece, miscellaneous showboat factor (the film is silent). Gary Oldman in Tinker, Tailor, Soldier, Spy? Non-American, period piece, and (this is insane but true) a potential first-time nominee. George Clooney in The Descendants? See Clooney Exception, The, above.

As delighted as I would be to style myself as the Nate Silver of Oscar stat-mongering, let me back off for a moment and say that Academy Awards “rules” like this are meant to be broken, and frequently are. Over the years, I have seen attempted formulations as loony as trying to correlate wins to a candidate’s alphabetical position on the ballot or to the number of lines an actor speaks in a movie — and any analyst who shelves common sense and instinct in favor of “Historically, it has been three decades since an actor shorter than 5-6 has …” is asking for trouble. (After all, even sabermetrics don’t necessarily get you to the World Series.) Almost every Academy Awards season produces some result that hasn’t happened in 30 or 40 or 50 years, because one of the quirks of the Oscars is that voters subconsciously — and sometimes consciously — love to break their own patterns the moment they recognize that those patterns exist.

So it would be absurd to rule out a best-actor nomination for Pitt. The complication of a possible supporting-actor nomination for The Tree of Life (incidentally, a period piece in which he uses an accent) is, I think, a wash — it could help him by further guaranteeing his presence in the collective consciousness through awards season, which may make voters feel compelled to write his name down at least once, but it also gives them the option to throw him a consolation nomination while denying him best actor. At this point, the main thing Pitt has going for him (other than a strong performance, which actually does count for something) is that Moneyball will have traction. Unlike, say, Drive or Warrior, which harbored their own fleeting best-actor hopes not so long ago, it’s going to stay in the conversation for a couple of months, not just a couple of weeks. That matters: The Clooney Exception worked in part because both of Clooney’s movies received multiple nominations, including ones for best picture. If Moneyball gets that kind of support, a best-actor nomination becomes more viable. Otherwise, it’s a reach: Aside from all the bad metrics, Oscar voters may simply feel no particular need to nominate an actor as successful as Brad Pitt for playing a character who looks like Brad Pitt and sounds like Brad Pitt. It may be unfair that they prefer to reward the new, the old, the unfamiliar, or the ostentatiously transformative over the swing, confidence, and ease of a star in his prime, but it’s been that way since the era of Cary Grant — who, incidentally, ended his 35-year career in Hollywood with the exact number of nominations Pitt has now: Two.

Previously: Oscarmetrics: Why Contagion’s Best Picture Chances Are Better Than You’d Think
Oscarmetrics: Four Best Actor Candidates to Save a Seat For
Oscarmetrics: The Contenders So Far
What the F is the MPAA Thinking?