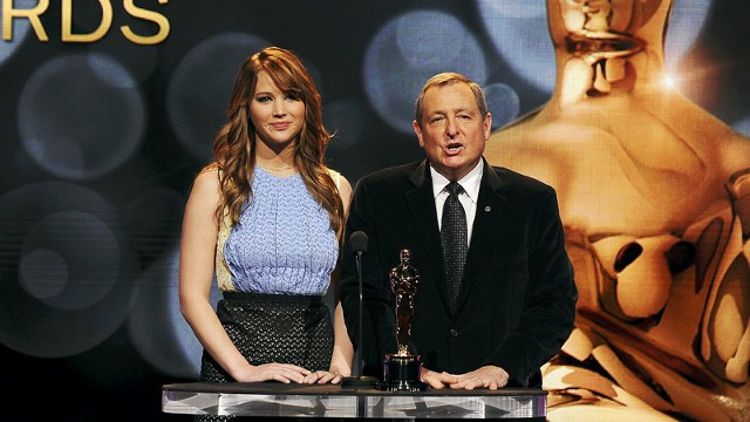 It’s been almost six months since I wrote my first column on the 2012 Oscar race, and we’re finally at predictions week. The ballots are in (or will be by tomorrow); the votes are soon to be tabulated; the hopes and dreams of 80 percent of the nominees are currently being ground into a fine powder. And it’s time to put your money where my mouth is. All this week, I’ll be announcing my guesses and doing my best to simulate an actual Oscar telecast, meaning that I will be starting with the stuff you don’t care about, taking immensely long pauses, and making you wait forever for the whole ugly business to end. Join me, won’t you? Imagine that Billy Crystal has already done his shout-outs to Brad and George in the front row, made a Harvey Weinstein reference (cut to reaction shot of Harvey looking amused/anticipatory/terrifying), and made one really funny joke I can’t think of that will end, “… or, as they’re known in Hollywood, The Help!” Hooting! Approving applause!

The Girl With the Dragon Tattoo
Hugo
Moneyball
Transformers: Dark of the Moon
War Horse

Drive
The Girl With the Dragon Tattoo
Hugo
Transformers: Dark of the Moon
War Horse

I’m listing these two categories back-to-back and analyzing them as one because I think that approach accurately matches the blurry muddle these two awards create in the heads of most Academy members when they appear together on the ballot. Trying to read the mind and methodology of voters for a pair of awards this technical can be tricky, since even taking the time to create a few paragraphs of analysis does not reflect the reality that a huge number of Oscar voters will take no more than five seconds to look at these lists, then quickly ink in the box for the movie they like that they most instantly associate with sound. Even the category names don’t help — you may find it interesting, for instance, that until 2000, Best Sound Editing was known as “Best Sound Effects Editing” or “Best Sound Effects,” and “Best Sound Mixing” was simply called “Best Sound.” But most voters won’t remember that history, or expend a great deal of sweat on the distinction — especially in a year like this, when four out of the five contenders match up in each category.

So let’s try to create a slowed-down version of the lightning-fast way this decision will be made. Sound guys, who do the nominating, almost always nominate one effects-driven popcorn movie — Tron: Legacy, or Star Trek, or Wanted, or Salt. But unless that movie is classy enough to have appeal to other Academy branches (as The Bourne Ultimatum, The Dark Knight, and Inception did), it quickly gets crossed off the list, which means you can eliminate Transformers: Dark of the Moon. And since it’s virtually unheard of for a movie to convert a single nomination into a Sound Editing win (it’s happened only once in the last 25 years), you can probably scratch Drive as well.

Let’s assume that Moneyball, a surprise nominee for Sound Mixing, is probably out of the running too. That leaves The Girl With the Dragon Tattoo, Hugo, and War Horse competing for both awards. I’m assuming the latter two movies, both of which are up for Best Picture, have a broader base of Academy support than Dragon Tattoo, which isn’t. Hugo, with a field-leading 11 nominations, could be the movie that lays waste to virtually all the craft categories and emerges with the highest statuette total of the evening. But remember, these decisions are made in the snap of a finger, and when you think of Hugo, what comes to mind first is what you see, not what you hear. War Horse, on the other hand, carries two impressive pedigrees: It’s a Steven Spielberg movie, and Spielberg movies have won 11 sound Oscars over the years; and it’s a war movie, a genre that voters almost intuitively connect with sound to a degree that should intimidate its competitors (past winners include The Deer Hunter, Apocalypse Now, Platoon, Glory, Saving Private Ryan, Black Hawk Down, Pearl Harbor, Letters From Iwo Jima, and The Hurt Locker). I’m therefore giving War Horse a narrow edge for both wins.

Now translate the above into voter speed, and it goes something like this: No, maybe, pretty, no, CANNONS! Same result.

I’ve listed the five nominees without their composers not out of disrespect, but because that’s the way they appear on the ballot — titles only, in alphabetical order. (Incidentally, that’s true of every Oscar category but acting — not even directors have their names on the final ballot.) So, while many voters may be aware that John Williams appears in this category twice, receiving his 46th and 47th career nominations for The Adventures of Tintin and War Horse, that’s not information with which they will be confronted when it’s time to cast a vote.

I happen to love both of these Williams scores; Tintin is his most playful, light-footed work in years, and I think the mid-century emotional oomph of War Horse is glorious; I’m perplexed by commentators who have dismissed it as “sentimental,” as if sentiment is some big secret trick that War Horse tried to pull on them but they were just too smart to fall for it. You don’t think the song score for Drive, which literally tells you that the main character is “a real hero,” is sentimental? You don’t think Trent Reznor’s use of Led Zeppelin’s “Immigrant Song” in the Dragon Tattoo credits is manipulating you by creating a soundscape that contextualizes the entire world of the movie? Please. As I’ve said before, everything is manipulative and everything inspires sentiment. You can complain about what’s being manipulated, how, and to what end, but not about the fact that it’s happening.

I’m not a huge fan of three-time winner Howard Shore’s serviceable work on Hugo, but I admire the moody, less-is-more score that Alberto Iglesias created for Tinker Tailor Soldier Spy. I could elaborate, but why bother? The Artist has this one all sewn up. The particular qualities of Ludovic Bource’s music almost don’t matter; what voters will remember is how much of it there was and how much work it was asked to do in the absence of dialogue. Those among you who enjoy reading tea leaves during the telecast (and those among you who are praying for a surprise), take note: If, for some reason, The Artist doesn’t win this category, it’s a very bad sign for its chances later in the evening.

“Man or Muppet,” The Muppets
“Real in Rio,” Rio

Having alienated quite enough people with last week’s suggestion that the Best Animated Feature category be put to death, I’m not about to compound the problem by proposing the elimination of another Oscar, but from the looks of that nominee roster, it appears the category is bent on killing itself. How bad a job did the music branch do this year? So bad that they didn’t even nominate the best song from Rio, which is not only really funny, but would have given us a Flight of the Conchords face-off between its composer, Jemaine Clement, and Bret McKenzie for “Man or Muppet.” Apparently it was ineligible. I’m sure there was a reason. I don’t care what it was. This list, if you can call it that, is butt-awful. If these two compositions really were the best of the 39 songs that qualified, then it’s time to toss the category. If they weren’t, then it’s time to slap the nominators.

Anyway, “Man or Muppet” wins, because the word “Muppet” is appealing and the other song sounds like a Brazilian tourism bureau ad.

We Found It On Netflix Instant: Apartment 12 with Mark Ruffalo