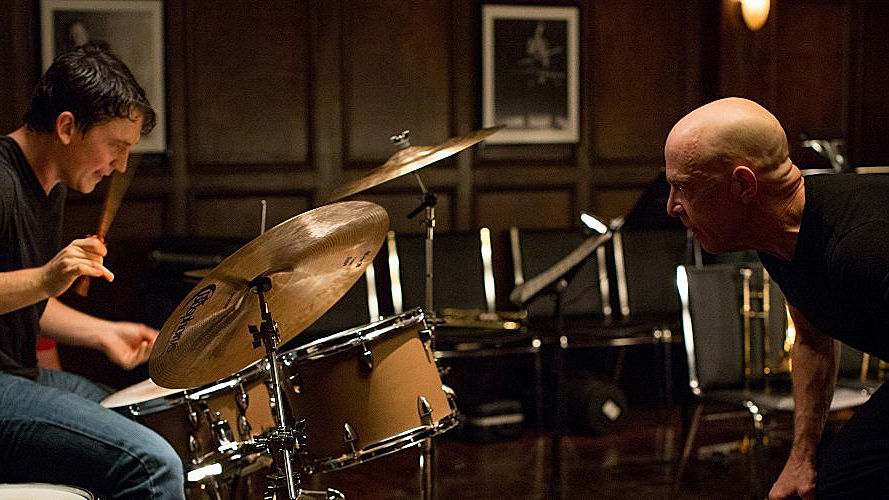 Nothing in life should end with a six-minute drum solo.

I avoided seeing Whiplash when it came out. After attending music school, the last thing I really wanted to do was think about how I spent that truly wonderful four years of my life mostly throwing bundles of borrowed money onto a blazing funeral pyre of idealism. It’s like Jackson Browne wrote in “These Days”: “Don’t confront me with my failures / I had not forgotten them.”

Now I’ve seen it and can say this: Nothing that happens in Whiplash would ever happen at a music school or at a gig or at any rehearsal for any gig, ever, anywhere. From a musical standpoint, Whiplash is a caricature at best. I don’t mean the actual music, which is fine, and “Caravan” will forever be the hotness. J.K. Simmons is fucking hypnotic as the living embodiment of the Buddy Rich tapes crossed with King Joffrey. But, in my time studying music, I never encountered an instructor who even remotely resembled Terence Fletcher. The idea that a music professor at an institution students pay (trust me on this) absurdly large amounts of money to attend could hurl racial epithets at those students or put hands on those students and somehow remain employed for any amount of time is a total fantasy on par with The Hobbit.

Fletcher was a cartoon dictator, but it worked because nothing he said or did in the film can hold a candle to the self-immolating fury of the voice inside a person’s head when all that person wants to do is be really and truly great at something.

I wanted to be a great musician. How ridiculous does that sound? It certainly feels ridiculous to type. When Whiplash’s first-year drumming student Andrew, played by Miles Teller, tells his family over dinner, in reference to Charlie Parker, that he’d “rather die drunk and broke at 34 and have people around a dinner table talk about me than live to be rich and sober at 90 and have no one remember who I was,” it was like listening to 20-year-old me’s inner monologue. Fletcher was brutal, sure, but Andrew actually feels — believes! — that he’d rather die, penniless and with a belt tied around his arm, than not be a great jazz drummer.

That’s a romantic sentiment until you actually turn 34 and realize that, as disappointing as things may have turned out, you’d like to keep drawing breath, thanks. Believing that you have something to say is a pretty universal human sentiment. Thinking that the world actually needs to hear it is pure hubris and pretty much the definition of being between the age of, say, 16 and about 25. In that way, Whiplash feels incomplete to me. I’d like to come back in 10 or 15 years — like with Richard Linklater’s sequels to Before Sunrise — and see how Andrew deals with the post-idealism dystopia of playing in wedding bands, not having health insurance, managing a Starbucks, and not being able to own a house. Maybe he wouldn’t even last that long.1

The greatest single lesson I learned at music school happened one day during jazz lab, and it’s something that still informs my life today. It was my freshman year, and I had managed to score high enough to get accepted into one of the lower-level jazz combos that met twice a week, under the tutelage of an instructor, to play through standards. The setup was piano, bass, guitar, and drums. The teacher was a trumpet player, and he would call the tunes and play the heads (the melody), since most of the students in the class weren’t particularly adept music readers.2

I don’t remember the name of the tune. It wasn’t a well-known standard, but, as I recall, we were playing a blues in B-flat, with this little chromatic bridge section. We were going through the tune, and the teacher signaled to me to take my solo. I hacked away for two choruses,3 which is what we usually took, and I looked up at him to signal that I was coming out of the solo.

He put his arm up, pointer finger out, and made a circular motion. Keep going.

I  took another one. I looked up. Keep going. I knew I wasn’t, like, playing some kind of amazing solo here, so what the hell? I kept going.

Five choruses. Keep going. Six choruses. At this point, I wasn’t even aware of what I was playing. I was just filling space, trying to think of some pattern, some lick, some anything that I hadn’t already played, and I was failing miserably, crashing into this sad ball of flames. Seven choruses. Eight. I think he made me solo for 10 minutes.

I realized then that everything that I had to say, that I was capable of saying, on my instrument could be condensed into two choruses — maybe a minute and a half of real time. That’s it. There was no screaming, no slapping, no crying. It was devastating.

Whiplash ends with Andrew taking an unasked-for six-minute drum solo. I assure you that, in real life, not even other drummers and their loved ones want to hear a six-minute jazz drum solo, unless the drummer in question is this person or maybe this person. So why does it work? Because Andrew finally stood up for himself? No. Because he finally had something to say.