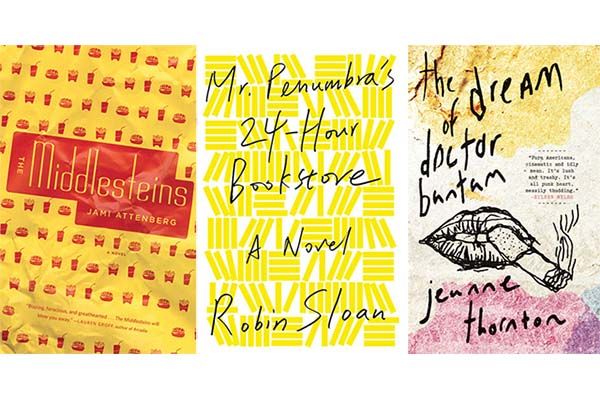 The Middlesteins by Jami Attenberg

After 30 years of marriage, Richard Middlestein leaves his wife Edie, a lawyer whose lifelong love of food has slowly but surely pushed her weight above 350 pounds. This is the setup for The Middlesteins, an honest, hilarious portrait of a fractured Jewish family in the Midwest. Throughout September, I’d recommended the book to friends as a funnier, shorter Jonathan Franzen novel. I said this to three or four people before someone pointed out that the cover has a blurb by Franzen on it. (It does not say “a funnier, shorter version of my work.”)

The scope of The Middlesteins isn’t nearly as ambitious as, say, Freedom, but Jami Attenberg shares Franzen’s gift for writing deeply flawed characters with just enough compassion to make them relatable, even at their most selfish. Each member of the Middlestein clan likes to blame everyone but themselves. Daughter Robin thinks her mother’s poor health is her father’s fault; her stoner brother, Benny, wants to ignore the problem altogether; but perhaps most interestingly, it’s Richard who knows that Edie is beyond saving. Still, nothing rivals Attenberg’s descriptions of Edie’s overeating, which are detailed with equal parts empathy and humor. Here’s a good example:

The cookies smelled like nothing, like air, and that’s how they felt inside her, too. They never filled her up, no matter how many she ate. Once, at night, when she was certain everyone was in bed, she had eaten two boxes of the cookies, just to see what would happen, and it had done nothing to her. Edie couldn’t feel a thing.

For a book about obesity, it’s surprisingly light on social commentary, which actually works to Attenberg’s benefit. She has instead opted to write an intimate family drama, specific in its circumstances but universal in its problems. The Middlesteins is enjoyable throughout, but the final 50-ish pages set up one of the year’s most heartbreaking conclusions.

Set firmly in present-day San Francisco, Web designer Clay Jannon finds himself working at a peculiar bookstore where the patrons are few and the purchases they make are even fewer. Out of boredom and curiosity, Jannon starts charting customer purchasing behavior, which sends him down a rabbit hole that involves chasing down the mysterious book shop’s mysterious owner, Mr. Penumbra, a secret society called the Unbroken Spine, and a heist that involves a cardboard book scanner designed by Google.

Though Mr. Penumbra isn’t technically science fiction, its best ideas and themes certainly have a lot to say about technology and the future. Sloan is deeply interested in the tension between print and digital books, and more broadly, embracing the old and the new. Ever the optimist, Sloan believes these things can coexist, a refreshing perspective from the zero-sum-game perspective of most book futurists.

Still, Mr. Penumbra does show some common weaknesses of science fiction, which often values ideas over storytelling. We never get a sense of Clay Jannon’s character, other than that he is enthusiastic and curious, and his relationships with Mr. Penumbra and his friends lack tension or complication.

These felt like minor flaws, though. Sloan isn’t just exploring new ideas, but laying the groundwork for a new genre of literature. While the influence of Neal Stephenson and William Gibson is present, Mr. Penumbra is something all its own: a technocratic adventure where every riddle and puzzle is solved with very real gadgets, a humanizing reflection on technology that evokes the tone of a fairy tale, a brisk and brainy story imbued with such confidence that it will leave you with nothing but excitement about the things to come.

The Dream of Doctor Bantam by Jeanne Thornton

It was a strange coincidence that I finished The Dream of Doctor Bantam on the same day that I saw The Master. Both Jeanne Thornton’s debut novel and P.T. Anderson’s latest film feature Scientology-like cults wrapped around unconventional love stories. There is also something common between the disturbed, restless spirit of Joaquin Phoenix’s Freddie Quell and Thornton’s central character, Julie Thatch, a hardened teenager whose sense of direction is shaken after her older sister’s suicide.

Julie falls in love with Patrice, a girl who resembles her sister and an adherent to Thornton’s fictional version of Scientology, the Institute of Temporal Illusions. Patrice’s devotion to the group’s leader, Dr. Bantam, paired with her delicate demeanor, is constantly at odds with Julie’s disapproval of the cult. In one devastating moment, Patrice asks, “You love me, but you don’t love what I believe?”

There’s a discomforting tension that runs throughout The Master. Its saturated palette and Jonny Greenwood–composed score give the film a consistent tone that’s hushed and at the same time distressing. Doctor Bantam feels the same way. It’s a slow, dissonant burn of a novel, a haunting meditation of young, wayward love.

TL;DR: A coming-of-age tale about Scientology and lesbians.