Never Stage Dive at a Rick Ross Show, and Other Notes From SXSW 2012 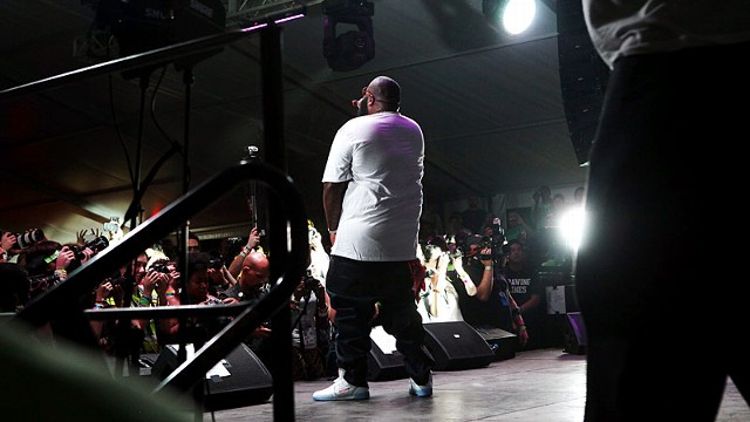 The best thing that happened to me at SXSW was getting utterly manhandled by mythical-giant-sized security guards at the Rick Ross show. Please, allow me to explain.

Early Saturday afternoon, my top secret sources deep inside of Maybach Music Group* informed me that the unannounced guest on the lineup for that day’s Fader Fort show would be none other than Ricky Ross the Bawse. With this fact in hand, I got inside the grounds early and, with some internal machinations and a lot of pluck, managed to work my way into a prime spot right by the stage. The vantage point was impeccable; when Ross did appear, to much merriment and cheer, I could clearly see him, in all of his fat-boy-bearded-swag glory, huffing and puffing around the stage, from only a few feet away. The problem here, though, was that this level of proximity — and a long week of various music-entertainment-based stimulus and the blistering Austin heat and, OK, possibly, a cocktail or two — led to the birth of a plan. To pay tribute to the larger-than-life MC, to express my zeal for his cooked-down crack-rap — I would stage dive.

I had my route planned out by the first needle drop: over the fence immediately in front of me, behind the security guard to my right, up the back of the stage, and then right down the middle, over the photographer’s pit, and into the crowd. I was pretty sure I’d make it, and that Ross would grimace at me in respect for my pizzazz and spark as I went flying through the air — we would make eye contact, briefly, and in that space we would know each other.

Anyway: The guard I’d be contending with was average in size, and relatively advanced in age, and I knew I could get the drop on him. I surveyed the scene over and over, my heart pumping out of my ribcage, waiting for just the right moment to go. And then “Stay Schemin’” dropped, and I knew it was time. I squinted, strapped up my backpack, nodded knowingly at my co-conspirator — who, and this will come into play in just a second, heavily suggested an alternate route — and pushed off.

I got over the fence and stumbled, but didn’t fall, on the landing. The guard got a hand on me but I brushed him off and sprinted to my planned opening. I scrambled onto the stage — halfway home! Then I got sat on by an airplane. And this is when I realized my plan, in actuality, was terrible. I hadn’t even scoped this security guard on the right side of the stage, this mountain of a man now sitting on me. (This omission was particularly odd because, again, this man was ogre-sized.) He landed on my torso. Like, he planted himself on there. He got real comfortable. Then his smaller buddy yanked me by my legs off the stage, and the dream was truly over. A third Beast of the Giant Lands grabbed me, shoved my hands behind my back, and looped his arms in mine; in this manner he drove me forward, almost lifting me off the ground, out of the back of the grounds. We had ourselves a little conversation:

And then he Uncle Phil’d me the hell out of there. Out back, some guys were set up to do video interviews. They’d seen me get tossed, and they got me to go on record on the incident. First, though, they had to convince me they weren’t going to shove me around as well. I had developed an intense temporary paranoia that made me think everyone around me wanted to violently kick me out of a Rick Ross show.

A few minutes later I had reconnected with my co-conspirator, who had tried to film my attempt, but was laughing too hard and mostly got her own feet on camera. She pointed out again the route I could have gone, over on the far side of the stage, where the guy who sat on me probably wouldn’t have been able to sit on me. I smiled wistfully, shook her off. There was meaning in the failure, and in the crushed toe that had me hobbling through the airport, and the various bruises on my thighs, and my throbbing knee. When people ask me how SXSW 2012 was, I’ll know just what I’ll say. I’ll say: “It was so much fun that it somehow convinced me stage diving at a Rick Ross show was a good idea.”

On that note: Here are a few of my other favorite things from this SXSW that was.

WAVVES
I caught Nathan Williams, a.k.a. the jerky punker Wavves, in the sleepy, cavernous Emo’s East in the middle of the afternoon. He writes incessantly catchy riffs that suggest a sincere appreciation for Blink-182 — or, as this non-native English-speaker Internet commenter astutely put it, “Most harvesting admiration precisely because they actually are so carefully to the unwritten laws of the genre it. Poppy riedeltje, check! Buggy production, check!” — and he’s almost as good at writing packed-in jams as he is at talking shit from the stage. To the person yelling “Give me your drugs!” “Why would I give you my drugs? That’s the dumbest thing I heard all week.” Also: “I’m on a different wavelength. [Pause.] It’s called ‘ecstasy.’” Later, while intro’ing a track: “This song is cool. But it’s not about ecstasy.” Only appropriately, our shuttle ride after Wavves back downtown made a bizarre, impromptu transformation into a druggy party bus. Our gregarious shuttle coordinator, whose name will be redacted here to protect the guilty (which is too bad, because his name was hilarious), encouraged a certain devil-may-care attitude, and all of a sudden 19-year-old sorority girls in frilly boots were passing a joint to everyone in the vehicle while their bro friends tried to freestyle. I swear to God, we were on this thing for 13 minutes max, and I made friends for life.

ALABAMA SHAKES/FUTUREBIRDS
Over at the Hype Hotel, the hotly tipped retro-Southern-rock/power-vintage-soul act Alabama Shakes were in the building. They came as advertised, with a deceptive swagger — the whole band, including unassuming front woman Brittany Howard, look like kind geeks — and with punch for days. Howard’s voice is bonkers good, strong and pristine. But, at least as far as I’m concerned, they were upstaged by their preceding act, the Futurebirds. This Athens, Georgia-based four-piece plays jammy rock with triumphantly huge crescendo choruses, and, from the looks of their smiles, they have a fucking blast doing it. Also, two of the guys in the band had the genre-appropriate giant beards, one guy looked like he should be in Weezer, and one guy kind of looked like Evan Dando, so that was pretty cool. And Hype Hotel was giving out Taco Bell, so all in all it was seriously good vibes that set.

CLOUD NOTHINGS
Holy crap. Cloud Nothings. Go see Cloud Nothings. They came out at 1 a.m. to a packed-and-primed rooftop bar audience. Front man Dylan Baldi said “Hello, we’re a band from Cleveland, Ohio, called Cloud Nothings,” and then these fresh-faced lads proceed to rip shit up for 45 minutes. This was just some straight broken-amp fuzz shredding, just some straight jump-up-and-down in-your-room-alone-screaming-at-the-top-of-your-lungs-type action. Baldi yelped and wailed — “nooo one knowwws our plaaaans for uuuusss / we woooonn’t laaaast looooooong” — and his band flailed and wilded out right along with him. This one dude in a Utah Jazz AK-47 jersey was loving it almost as much as me. At one point Baldi goes, “How’s your SXSW?” and everyone cheered, and then he said, “Well, mine sucks because I’m not 21 yet,” and then his band blazed through another one of his perfect songs, and then I hated him forever for his talent and for his youth.

ARAABMUZIK/THE DRUMS/JUICY J
SXSW, of course, is all about random-ass clusters of bands across genres and dispositions. But some times the curation is more successful than others. And when you hit a real nice run of juxtaposition, you’re riding high. By Friday evening, I’d already seen The-Dream, 50 Cent, and Eminem — who, for the record, is dressing like me in seventh grade these days — do various hits. (I’d also gone hotel pool swimming while accidentally dressed like I was attending one of the Colonel’s coke parties, but that’s beside the point.) Late night, I went on a mini-run. First I hustled over to see the forward-thinking hip-hop producer Araabmuzik do his now trademark destruction of the MPC. The crowd was certainly there for Skrillex, but Araabmuzik won them over with a furious 20 minutes of his insane drum-pad soloing. I couldn’t tell for sure, but it looked like even the girl rocking the glow-in-the-dark hula hoop was paying attention. Then I got over to Stubb’s for The Drums, and their spectral indie-pop, before ending up across the street for the Green Label Sound party and a totally amped-up appearance from Three 6 Mafia’s Juicy J. The petite stage was crammed to the point of possible collapse with Juicy J’s pals, which included his label boss Wiz Khalifa. At one point the DJ threw on “Black and Yellow,” but Wiz just wanted to chill, anonymous rap-posse-member style. Meanwhile, in the crowd, a young man had climbed a garbage can and was attempting to surf it while yanking on a tent pole; this was only slightly above the vibe at large. Juicy’s DJ cycled through the hits fast and furious, but the takeaway was clear: Dude likes to get fucked up and party. You say no to drugs. Juicy J can’t.

A$AP ROCKY
OK. OK! As you might have heard, things got really real at the A$AP Rocky show, which went down at the VICE party late on Saturday, which was more or less the last bit of SXSW. At first it was just another live-as-hell performance from young Rocky and his pals: “Wassup” and other bangers dropping left and right, a guest appearance from Main Attrakionz, a shirtless A$AP Ferg keeping things extra-sweaty. And then a dude threw a beer onstage, and tensions were introduced. The crew hustled over to him, someone spat on him, someone else blindside-tackled him. In the most hilarious fashion, Rocky calmed down the situation. First, he called out “A$AP fall back! A$AP fall back!,” like he was Optimus Prime and this was his “Autobots, transform and roll out!” It totally worked, though, which is awesome. Then he yelled, just a touch disingenuously, in the general direction of the scrum, “Is it love? Is it love? [Pause.] Make some noise for world peace.” The show went back to normal for a bit, but eventually more beer was thrown and, apparently, the green bandanna on Rocky’s head was snatched off. And, boom, the brawl was on. The A$AP crew dived into the audience, looking for assailants, and immediately the floor cleared. A mass of drunk people ran, grinning, into the safety of the venue’s backyard. Outside, party triage was assembled. While the officials were shutting it down, I overheard several accounts of the events we’d all just lived through. My favorite was one guy, who looked vaguely like superstar DJ Steve Aoki, half-seriously telling his friends he had just had sex with a girl in the pit. “Dude! She was grabbing my dick! Now she’s gonna think Steve Aoki got her pregnant!” So it was a violent and weird and bandanna-theft-based last night of SXSW, and therefore a perfect one.

Filed Under: A$Ap Rocky, Rick Ross, Sxsw, We Went there