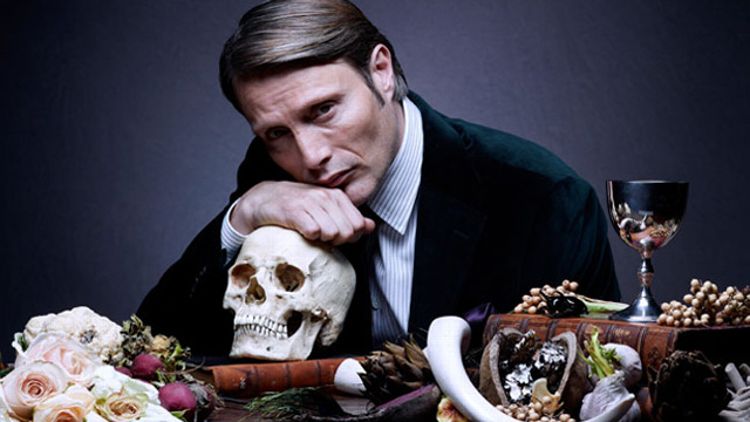 I hate the sight of blood. Not in real life, where I tend to order my steaks the way Lil B prefers his swag, but on television, where arterial splatter has become dispiritedly commonplace. On dramas both good (Boardwalk Empire) and bad (The Following), crimson is the chosen color for a crude, paint-by-numbers approach to adult storytelling. I hate the way these shows mistake the harvesting of hearts for the exploration of them and conflate horror with maturity. Just because something’s shocking doesn’t necessarily make it interesting.

So why, then, do I find myself transfixed by Hannibal? The serial-killer series (premiering tonight at 10 ET on NBC), doesn’t just tick all the boxes I tend to deplore, it gleefully impales them on a sharpened deer antler. For every character introduced in tonight’s pilot, another is brutally murdered. Throats are cut like sides of beef, livers and lungs are palpated, salted, and peppered. And running through it all like a vein is the blood: pooling beneath bodies in thick puddles of dark vermilion and misting through nearly every frame, a sticky pink miasma of gore that stains all it touches. And it touches a lot.

And yet Hannibal, like its charismatic cinematic namesake, attracts when it ought to repel. Hyperstylized and, at times, hypnotically beautiful, it’s a nightmare masquerading as a dream, the rare cannibal story that has the smarts to back up its hunger for brains. That woeful NBC, of all places, should be the network to finally crack the code for getting intelligent, inspired savagery like this on its formerly family-friendly air is tougher to swallow than one of Dr. Lecter’s omelets. But here we are. Desperation can make men do terrible things, but, it seems, it can also have the reverse effect on a flailing network.

Tonight’s pilot, cheekily titled “Aperitif” (next week is “Amuse-Bouche,” followed, of course, by “Potage”; I haven’t seen them because my DVD drive devoured the promo disc like a kidney pie), is directed by chilly auteurist David Slade, last seen classing up this time slot with his work on the late, lamented Awake. Slade lights every scene like a mortuary, all cool blues and bruised blacks. But the real visionary at work is executive producer Bryan Fuller, the pathologist behind morbid trifles Pushing Daisies and Dead Like Me. Fuller has long had a reputation for being Hollywood’s cheeriest goth, but his twee affectations tended to leave me colder than one of his beloved corpses. But in Hannibal, he’s found his ideal canvas. Like Dr. Lecter himself, Fuller is a passionate aesthete who never loses his wit or precision even when using them in the service of monstrous things. Here, he spritzes his scripts with moments of levity and straight-up oddness like red food coloring on a Halloween cupcake. Casting comedy nerds like Balls of Fury star Dan Fogler and The Kids in the Hall‘s Scott Thompson frightfully against type only adds to the unsettling allure.

Suffice it to say, I’m no Lecter completest; I admire The Silence of the Lambs mainly for the way Jonathan Demme lingered on the psychological dread, not the bottom-wallowing body dissection of its increasingly deplorable sequels. Hannibal takes its premise from that same playbook. The real star isn’t the dark doctor himself but rather an FBI instructor named Will Graham. Much of the character’s backstory — he’s a brilliant, disturbed profiler — is taken from Thomas Harris’s first Hannibal novel, Red Dragon, which featured him as the protagonist. (CSI‘s William Petersen played Graham in 1986’s excellent Manhunter; Ed Norton did the same in 2002’s Red Dragon.) But Fuller, as is his wont, doubles down on the disturbance. His Graham, played brilliantly by British actor Hugh Dancy, is borderline Asperger’s, an emo genius who collects stray dogs but can’t look people in the eye. When he closes his own, however, he’s able to game out crime scenes in his head, re-creating the events like a woozy ballet of death. Dancy alone would make the show worth watching; he’s somehow able to play fragile the way less nimble actors act tough. That he’s married in real life to Claire Danes makes me wonder if there’s any household competition as to who can better play a brilliant-but-troubled rogue investigator. The fact that there’s no longer a clear favorite is, itself, remarkable.

The man who drags Graham into the investigation of the Minnesota Shrike — the ruminant-obsessed sicko who mounts the bodies of young girls on the sorts of animal heads you’d usually mount on a clubhouse wall — is FBI honcho Jack Crawford, played with unexpected restraint by Laurence Fishburne. Crawford’s also responsible for the pilot’s more dangerous hire: a certain psychoanalyst with a taste for offal. But at least at first, Lecter is Hannibal’s only wobble. As portrayed by Danish actor Mads Mikkelsen (Casino Royale, Valhalla Rising), he’s got the sly intensity of Anthony Hopkins but little of the blunt physical presence. Perhaps that’s for the best in the long term, as the series sets up Lecter and Graham to be colleagues before they become antagonists. (“God forbid we become friendly,” Lecter purrs over a home-cooked breakfast. “I don’t find you that interesting,” Graham replies. “You will,” Lecter says.) And the idea of two clinical, asocial geniuses trapped on opposite ends of the morality spectrum is fascinating, both in theory and how it plays out in the pilot as a cracked buddy comedy. Yet for now, at least, I found Mikkelsen — and his heavily accented English — to be a bit more peevish than predatory.

Still, that’s a small fava to harp on when the plated dish is so elegantly composed. It’d be ironic if Hannibal, a show that fetishizes killing, were to wind up resurrecting NBC, particularly in the same time slot where the good folks of County General  once worked such long hours to keep people’s organs in their body, not see them sizzling in a nonstick pan. But it’d also be deserved. All violent cop shows natter on about motives and charismatic evil; only Bryan Fuller seems able to back it with up a dark genius of his own. In his steady hands, Hannibal is the grad school version of The Following‘s relentlessly dopey glue-eating. He practices what they screech.