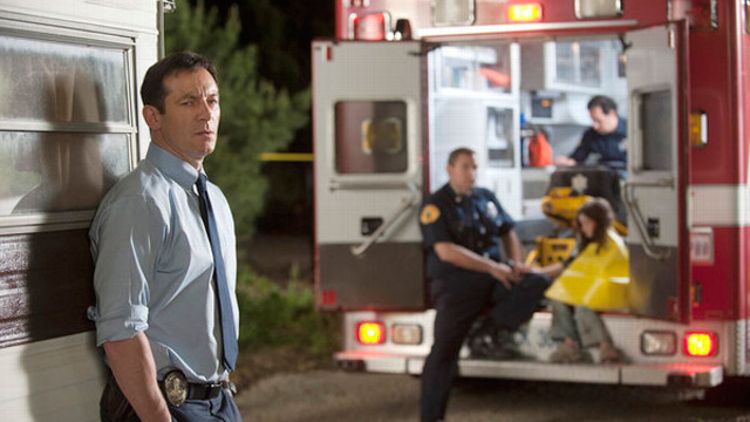 Kyle Killen has already survived a crash worse than the one that begins tonight’s premiere of Awake. The thirtysomething screenwriter made jaded critics swoon with his ambitious double-life con-man show Lone Star back in 2010, but the complex drama couldn’t attract enough viewers to make it viable on Fox. Instead, Killen’s attempt to cram twisty strands of cable DNA into a pleasing network package lasted about as long as shirt-averse star James Wolk would in the real-life Texas sun. Despite all the hype and praise, Lone Star wound up with as many episodes as Wolk’s Robert Allen had identities: two. Call it noble or call it foolhardy, Killen’s gambit was indisputably a failure.

Once bitten, but apparently far from shy, Killen returns tonight with Awake, another double-life series, this time for half-dead network NBC. That the pilot episode is uniformly excellent — it’s  nuanced and affecting in ways rarely attempted on the small screen — is almost beside the point. What the show means has nearly outstripped what the show actually is. Once again, Killen is hoping to prove that ambitious hour-longs can still exist on the big four, that 10 p.m. is still fit for entertainments free of acronyms, witches, or bitches . If Awake fails, the agents representing next year’s biggest and brightest ideas might bypass the traditional machinery completely, saving postage by e-mailing them to HBO’s elite midtown address instead of messengering them over the hill to blue-collar Burbank. It’s admirable that Kyle Killen wants to rescue the network drama. The problem is, he just might end up being blamed for killing it.

When I spoke to Killen from his home in Texas last summer, he didn’t deny that his infatuation with the mainstream came with risks. “With Lone Star, I didn’t see why necessarily those kinds of shows had to be on cable,”  he said. “And I found a partner in [Fox president] Kevin Reilly, who was harboring the same theory: that a show like Breaking Bad is just really, really good regardless of what network it’s on. There’s no reason a broader group can’t get into it if it didn’t take so much to find it.” Except the exigencies of a major broadcast network don’t allow for that discovery time; as with summer blockbusters, if the audience isn’t there from the beginning, even those yeasty shows with the biggest potential for growth are toast. The two aired episodes of Lone Star earned a very cable-esque rating of between 3 and 4 million people. Good for Bad, but something far worse for Fox. “It’s hard to nail down what we learned,” Killen told me. “There’s so many things that go into why something works or doesn’t. I would hope people don’t draw the conclusion that cable-style shows simply don’t work on network, because I love good TV too much to see these four big platforms abandon the idea that riskier, edgier programming can exist on their air.”

Still, if Awake follows Lone Star to the Alamo, it’s difficult to imagine that the networks won’t do exactly that, because it’d be hard to top Awake in terms of pure thematic cojones. The show centers on dogged L.A. detective Michael Britten, played with a surprising amount of delicacy by Harry Potter vet Jason Isaacs. We pick up Britten’s life sometime after a mysterious and fatal car accident, one that killed his son, Rex (Dylan Minnette, who played a similarly grieving, resentful kid on the last season of Lost), and left him with a new partner (a shockingly competent Wilmer Valderrama) and mandatory meetings with a needling shrink (B.D. Wong). Except that every night, Britten closes his eyes, and when he opens them again, his son is very much alive and winning tennis tournaments. In this reality, the car accident claimed Britten’s wife, Hannah (Laura Allen), and he’s got the same partner (a wonderfully lugubrious Steve Harris) but a more nurturing therapist, played by former President of the United States Cherry Jones. If it sounds complicated, you’re right. What’s remarkable about the pilot is that it’s never confusing. The grueling script revisions undertaken by Killen and network-supplied co-executive producer Howard Gordon (24, Homeland) are breathtaking in their structural ingenuity — the show introduces a bananas premise, seven characters, and two crimes in about the same time it takes to listen to “Paranoid Android” — and a credit to the Jedi/Padawan showrunner dynamic often enforced by the big four.

For the first hour, at least, Awake functions wonderfully as both a cop show — in true Law & Order fashion, Britten tidily wraps up two cases thanks to some intriguing overlap between his worlds — and as something deeper. Expertly shot by director David Slade (30 Days of Night, Twilight Saga: Eclipse), Awake’s competing realities are filmed in differing color schemes, green for Rex and red for Hannah, making both sides distinct and eerily beautiful. The cast is uniformly strong, with Jones and Wong serving as elegant foils and Basil Expositions to the steady charisma of Isaacs. It’s hard to imagine any other actor able to sell Britten and his outrageous circumstance so easily. From Isaacs’s first moments on-screen, we get him: Thanks to some color-coded LiveStrong bracelets, he’s mentally tough enough to survive this strange schizophrenia, for now at least, but vulnerable enough to show the cracks. His shaded performance is well matched by Allen, a carnivorous actress who first drew attention on the late, lamented Terriers. Her Hannah is far from a typical TV spouse, particularly one meant to be grieving. She’s brittle instead of soft, ravenous not reflective. When, at the end of an overdue date night with her husband, she chooses beefcake at home over a plated dessert, it becomes hard to imagine why Britten would ever want to wake up in the other world at all.

NBC’s ratings hang out in a place more hopeless than Rihanna, thus making them uniquely suited to invest in a slow-building series. But even so, the pleasures of the Awake pilot make it clear that Killen learned from his mistakes with Lone Star. While his interests still veer toward the Freudian, if not the downright Harvey Dent-ian, Killen has smartly shifted his POV character from antihero to hero and devoted himself to a framework that is decidedly procedural, with stand-alone police cases getting solved in the midst of the serialized murk. “I would say this is modeled on more traditional network language like you might find on an episode of ER,” he told me. “There’s going to be something interesting and stand-alone, but the relationships and personal problems are something that grow and you become invested in over time.” It’s a good comparison, particularly because Awake now inhabits the hallowed Thursday-night slot that George Clooney once reigned, but which has recently fallen into hat-strewn disrepair. (Also, ER’s Laura Innes shows up in Episode 2, sans crutch, as Britten’s potentially conniving Captain.) And despite his rocky experiences, Killen seems devoted to the idea that quality work will find an audience, no matter the venue. “The reason a network like AMC went from being a dot on the cable dial to a destination is because they invested wholeheartedly in people who told excellent stories,” he said last summer. “It’s unfortunate the [successful TV storyteller] formula is that simple because it makes it seem like it’s easy, but there’s a huge difference. It’s simple, because you just need to push a large boulder up a mountain — it just doesn’t happen to be easy at all.”

It’s certainly not, as evidenced by subsequent episodes of Awake. A crippling lack of creativity isn’t the only reason why networks always fall back on the broad, plot-bearing shoulders of boilerplate doctor/lawyer/cop shows. Bold premises, while exciting in a pitch meeting, tend to wear out their welcome in an open-ended medium. And there are times, particularly in the third and fourth episodes, where Awake seems less skilled than its own protagonist at keeping things straight: There’s too much dreamy magic in the cop show and too much case-processing formula in the otherwise engrossing emotional beats. (To their credit, Killen and Gordon shut down production sometime around Episode 5, reportedly to sort out the show’s mythology and ground rules in a more satisfying way.) By rigidly paying service to competing muses, Awake can sometimes seem lessened by its complexity, like two good ingredients that are better served apart.

But ultimately Awake is worth rooting for, precisely because of its haunting and occasionally frustrating duality. It’s a cable show masquerading as a network procedural — or is it the other way around? Regardless, it’d be a shame to burden such an intriguing creation with the fate of an entire genre because it really doesn’t belong to one. (Awake would be as unlikely to run on AMC as on CBS.) Britten is as much victim as he is detective, investigating a mystery that could end up being wholly internal, and at times this can lead to him appearing oddly sanguine about his strange predicament. After all, why get hot and bothered about burying a loved one when they’ll be back on their feet in the morning? But, really, his circumstance is no different than Killen’s: For now, both character and creator get to have it both ways, one with his family and one with his storytelling sensibilities, mainstream and otherwise. The problem looming for both is that at some point it’s very likely that reality will intrude. And when it does, they’ll be forced to choose which vision lives and which dies.

Survivor: One World, Episode 3 - The Sadness of Ember-Grubbing in 'One World Is Out the Window'

An Appreciation of fun.