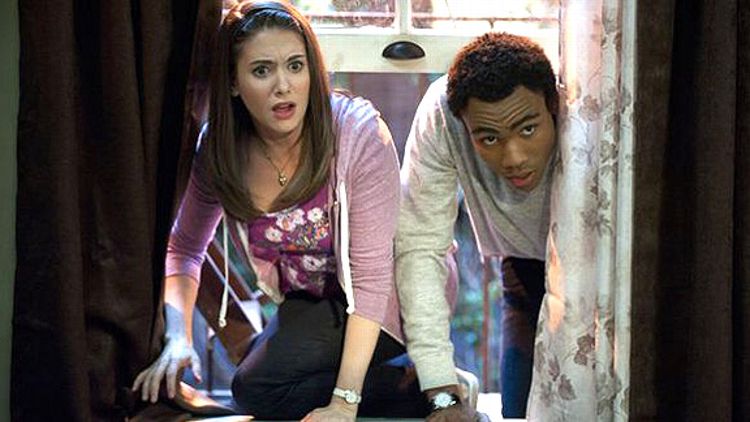 Every week in this space Grantland pop culture correspondent Andy Greenwald will run down the happenings and mishappenings in NBC’s Thursday comedy night done mostly right. (Note: The order reflects newsworthiness, not quality. Although occasionally the two just might overlap.)

These are strange times in Greendale — and that’s saying something because Greendale is a fairly strange place. Banished to purgatory while NBC waffles between its returning slice of heaven (30 Rock) and its newfound commitment to hell (Are You There Vodka, It’s Me Chelsea), Community‘s future is uncertain. Its enforced hiatus could end badly, like what happened to Abed’s beloved Cougar Town, or it could come back stronger than ever, like its hour-mate Parks and Recreation, perhaps eventually leading to the cast’s fervently Twittered dream of “six seasons and a movie.” Either way, Community’s wobbly fate caused me to watch tonight’s episode not with my perpetually critical eye examining it for ways to improve but with a genuine appreciation for what it’s managed to accomplish. Because “Foosball and Nocturnal Vigilantism” won’t be remembered as one of Community’s best episodes but it was certainly representative of what made the show transcendent for its vocal fan base, and an uncomfortable mix of alienating and appealing for the rest of us. It was an extremely odd, overstuffed half-hour that alternated spiky wit with gooey sentiment. There were two completely unrelated plotlines, a gaggle of garish Germans, a callback to an episode I barely remember, and an extended foosball sequence animated in the overly adrenalized style of The Fist of the North Star. It was wildly ambitious and almost preposterously messy. It was utterly, completely Community. And I enjoyed just about every minute of it.

Does this mean I’ve gone softer than Troy in an animal hospital? (One where the dogs are doctors, not the more obvious reverse.) Have I finally retired my pretentious cat monocle and seen the show as its many aggrieved defenders do? Perhaps. But it also could be that Community’s potential end allows some space to appreciate the show’s intentions, not just its results. If you’ll allow a pop cultural reference — and if you’re a fan of Community, I know you will — creator Dan Harmon often reminds me of an impossibly in-the-weeds contestant on Top Chef (let’s say he’s making a sauce … for chicken fingers) whose high-concept vision for his dish often gets undermined by the practical realities of cooking. As the precious seconds tick away and Padma’s — or, let’s say, Bob Greenblatt’s — footsteps get louder in the hall, he tastes his dish. Too salty. So he adds some sugar, but his fingers are shaking: a pinch turns into a fistful. Too sweet. So it’s back to the salt. And on and on we go. Sometimes the flavors come together in time. Often they don’t. But it’s hard not to respect Harmon’s insistence on serving up what he believes in, not what the general audience expects.

That said, the half of the episode focused on foosball (per Jeff, “the soccer of Ping-Pong”) was by far the stronger storyline. The Shirley/Jeff pairing was rare and inspired, a welcome chance to uncover the “horrible monster” lurking beneath all the “sweetness and religion.” That young, furious Shirley was actually Big Cheddar, the foosball shark who stamped Lil’ Jeff’s one-way ticket to Tinkletown, well, that I could take or leave. Better to focus on the “kill or be killed” present and watch this emotionally whacked odd couple go through their intense training montages and knee-slap their way through an impressive Rolodex of Teutonic punnery. (Special shout-out to Nick Kroll, whose Bavarian braggadocio was enough to make even the most devoted fan of weird art films and well-engineered cars touch his monkey.) And if the B-plot, in which Abed dresses up in Ben Wyatt’s Batman costume to avenge the special-edition DVD that Annie stepped on, didn’t quite add up to much, at least it afforded us the opportunity for Alison Brie to practice her Christian Bale imitation and the show to do what it does best: try something new. As Leonard would say, between bites of frozen pizza, “the stakes have never been higher.” Why get normal now?

So if Community wins kudos for inconsistency, what to make of the rest of Thursday’s uneven slate? The reliably warm Parks and Rec went widescreen for a night, setting up uncomfortably large professional stakes for most of the episode before sticking the landing on more familiar emotional terrain. The change in tone allowed showrunner Mike Schur an opportunity to indulge his inner Lester Freamon, bringing all the interwoven past plot threads posted on his tackboard into the light as the twisty history of Ben and Leslie’s clandestine relationship became public. Unfortunately for our wonky lovebirds, under the St. John’s Wort-fueled leadership of Chris Traeger, their infraction is nearly as serious as exposing your elbow in public. Chris not only demands but personally prosecutes Leslie’s ethics trial from behind a mountain of depression-masking herbal supplements.

While anything involving Andy Dwyer in a courtroom is hilarious (“Objection!”), and I’ll never turn my nose up at the sulfurous stench of Megan Mullally’s Tammy 2 (even if it was only for a brief cameo — did Nick Offerman forget to pack a lunch that day?), the fatal flaw in this half-hour was hinging the whole thing on Rob Lowe. Chris Traeger is a difficult character to calibrate when he’s not the focus of a plot — here, his high-minded hysteria was pitched three clicks past looney tunes, whether he was doggedly cross-examining iMovie aficionado Leslie or weeping at Ben’s heroic self-sacrifice. Still, it’ll be interesting to see where these developments lead: The show has tied itself in knots getting all of its characters into City Hall (Andy as personal assistant! Ann as whatever it is Ann does now!). How will it use the former Mayor of Icetown now that he’s on the outs? But those questions can be dealt with later. Because the court-reported, big-kiss ending was as luminous as George Williams’ skin after his hush-money facial.

For a few seasons now, The Office’s default answer for any structural problem was simple: add more characters! But not even the comforting, familiar face of Maura Tierney — truly, the chicken soup of small-screen supporting actresses — could save this post-Thanksgiving turkey. Dunder Mifflin has never been in a more precarious state than the one it finds itself in just three months into the post-Carell era. Last night’s episode was less lively than the sick cat Dwight put in Angela’s freezer back in the good old days, hobbled with stale jokes, bored performances, and a new central dynamic — between the rabbity neediness of Ed Helms and the bloated bluster of James Spader — that couldn’t power one of Creed’s remote control helicopters, let alone a sitcom. Robert California’s increasingly peevish mind games aren’t much fun for anyone to play, and the decision to make Tierney’s Susan California utterly normal was a misfire: Instead of adding texture to Spader’s barely there performance, their total lack of chemistry actually made him more opaque. It’s a bad sign when a once-nimble show like The Office starts camping out by the bathroom for laughs (Dwight’s complaint about “massive BMs” and Phyllis’ “room-clearing farts” should both have been flushed at the table read). The easiest way to get Susan California to flee isn’t to freeze her out of the office. It would be to make her watch it.

There are many kinds of silence in this world, as any good Simon & Garfunkel fan can tell you. But not even a Quaker meeting house populated entirely by deaf mutes could approach the deafening stillness of my living room during an episode of Whitney. It’d be tough to pinpoint the part I didn’t laugh at the most on Thursday. Was it the excruciating physical comedy of Alex jabbing a hormone-loaded syringe into the exposed midriff of the cougar lady? Or the sight of a sleepwalking Whitney crouching down to urinate on her boyfriend’s lap? Or perhaps it was the line “You say potato, I say po-ta-tas?” Actually, it was none of those: The low point of a very low half-hour was the appearance of Chelsea Handler, a comedienne so sour she makes the acidic Whitney look like Anna Faris, as a psychologist who openly mocks her patients. This wasn’t a character, of course; it was a bit, and it was strangely tin-eared for a show so clearly trying to warm itself up. In desperate search of some kind of emotional significance, the ending of the episode flailed around like Thom Yorke in a bowler hat, touching on babies and marriage and commitment and other assorted sugarplum topics that would have caused the Whitney of the pilot to dry-heave. Say what you will about that version of the show — and I have — but at least it felt honest for a performer better known for full-throated savagery than half-assed sweetness. As an Ambien-addled Whitney texted herself last night: Stay Real! And, for my sanity, please also stay on Wednesday nights.