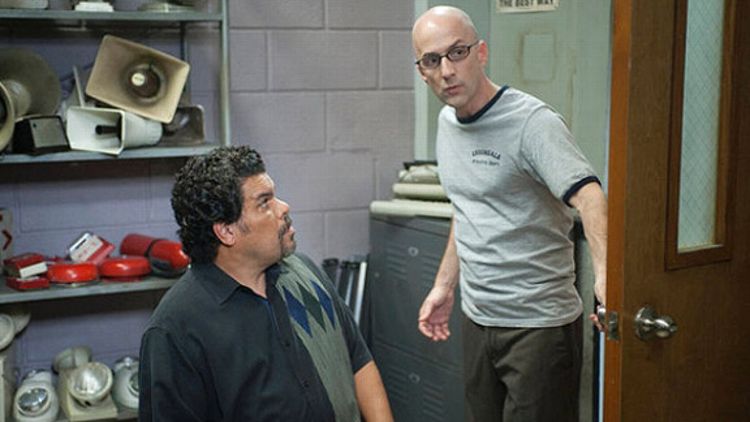 1. Community
This week, NBC announced that Community will be taking a mid-season hiatus, stoking rumors that the smart but little-seen show would fulfill the prophecy of its theme song’s closing lines: “I can’t count the reasons I should stay/ One by one they all just fade away.” Last night only strengthened the network’s case for cancellation, and I mean that as a compliment. A joke is only funny if you get it, so a plotline in which the humor primarily depended on insider references to a 1991 documentary about a 1979 film risked alienating everyone who didn’t remember the source material, not to mention those who never saw it. This pretty much encapsulates everything that is loved and loathed about Community: It’s odd, pretentious, and original. Who could have expected this from a series starring that guy from The Soup?

As always, the premise was deceptively simple: The Dean wanted to direct a new commercial for Greendale Community College that would prove more enticing than the one festooned with neon squiggles, which advertised typing courses and appealed to a generation that still faxes (i.e. fans of Fantasy Island reruns). Abed once again took the opportunity to film the process, using title cards to announce how far over budget the production ran, and from there, events unfolded in homage to Hearts of Darkness, the documentary directed by George Hickenlooper and Fax Bahr using footage shot by Eleanor Coppola on the set of Apocalypse Now.

Like Francis Ford, the Dean’s ego spiraled out of control. His star Jeff Winger (playing the Dean to flamboyant perfection, but also standing in for Apocalypse’s original Willard, Harvey Keitel) was fired. Script supervisor Annie (Dennis Hopper?) went mad wondering if her director wasn’t a genius, only a tyrant. In a callback to a previous episode, Greendale’s most famous alum Luis Guzman, whom you might recognize from IMDb, agreed to participate, but by then, the Dean was dancing naked around a fire and muttering, “I’m horrible, I’m horrible.” Mixing Brando with Sheen confused the meta conceit, but this series often devolves into a caboodle of in-in jokes.

As for the overall story arc? Troy and Britta continued to awkwardly confront their feelings through repeated hugs that advertised interracial communication. That’s all that happened. That’s all that needed to happen. This kind of cleverness makes it easy to understand why a small but loyal group of fans are willing to wear a fake goatee in order to save the show. It’s just as easy to understand how a larger group of people wouldn’t understand why the hell they’re doing that. Secretly, Community might prefer things this way.

2. Parks and Recreation
Regular recapper Andy Greenwald has noted that Parks has become a tough show to write about — it’s like one big cuddle party, if cuddle parties weren’t intensely creepy, which they are. Endearing, well-cast, funny — what else is there to say? “Smallest Park,” so-named for Leslie’s ambition to build the smallest park in Indiana, was reliably good, and some of the best moments were minor. When Andy decided to test drive a couple of college classes, he found himself drawn toward a lecture on lasers, but he got no further than “light amplification by simulated—” before finding his education lacking (specifically, lacking actual lasers). Chris Pratt’s bilious expression here practically stole the episode. He later ended up un-ironically enamored by Women’s Studies and, apologies to the writer who might have conceived of this plot point because, in my mind, sole credit goes to Amy Poehler, she of Smart Girls at the Party and nanny-thanking award speeches. Few subjects are as open to misrepresention or ridicule as this particular one — even Tina Fey loves a lesbian joke — but leave it to Parks to brave being heart-warming instead. And with the financial support of Ron Swanson, no less.

Elsewhere, Tom teamed with Jerry to choose a different font for the department logo. Pulling for Comic Sans over Tom’s desired Sopranos lettering, Jerry advised his coworker to curb his big dreams. For a moment, it seemed like Jerry’s old-school I.D. sent Tom running because he saw himself trapped in the job forever, Office-style. But in a semi-twist, the vintage look of the card was what led him to dreaming bigger, or at least suggesting a nifty retro-font that harnessed our undying cultural nostalgia.

Finally, Leslie overindulged her bumptious side, ignoring Ann’s advice to let Ben leave the department once the plan for smallest park was green-lit. Operation: Stall Ben got a little silly, with Leslie practically sabotaging her chances for city council by breaking all sorts of environmental codes, but her tearful confession at the end actually cast a plausible light on the high jinx. She’s willing to sacrifice the seat for her relationship. Strange how, in the right hands, tropes about love conquering all can actually sound sincere. Nobody needs to see New Year’s Eve now.

3. Whitney
That’s right, Whitney’s not last this week and it’s not just because of the dog. Though it’s mostly because of the dog. But her skepticism of marriage and habit of buying Mexican Xanax online while drunk on Kahlua didn’t fall completely flat, either. For the record, the argument at the animal shelter belonged to the adoption lady: “I don’t want to say that you ‘just dating’ is a red flag, but we’ve all seen Teen Mom.” Whitney acted like being in a relationship for three years was proof of an undeniable commitment when, really, it’s barely enough time to realize that your partner has just as many weird issues as you do (hence the premise of this show).

That scene also featured a Whitneyism more annoying than, but not unrelated to, the “you heard me” at the end of the opening credits. The latter is Whitney getting up in our faces over the fact that the show is… filmed in front of a live studio audience? Similarly, Whitney’s pompous neck thrusts, which usually follow whatever “badass” thing she’s just said or done (in this case, the sign of the cross), serve to put the exclamation point on her sentence. Presumably she thinks they signify toughness. Her midriff sweater signified otherwise, which is probably part of a joke too self-conscious to be funny. Like last week, her bids for cred actually make me wince a little on her behalf. The live studio audience loves it, though.

In the end, Alex and Whitney adopt Clarence, a deaf and blind basset hound with an IV and a neck collar who dies within a day, but not before they mined him of all the comedy an unresponsive basset hound can provide. A B-plot argued clumsily about whether men and women can be friends because When Harry Met Sally only came out 22 years ago. All the accidental kissing and unintentional crotch-grabbing that never happens between opposite-sex friends happened here. See, this show isn’t without its charms, even if those charms are unintentional. At this point, it’s not hate-watching, but more like huh?-watching.

4. The Office
Congratulations to this episode for making a fictional trip to Gettysburg, Pennsylvania seem even more boring than an actual trip to Gettysburg (not that such hallowed ground could ever be boring, but after seven score and eight years, it might be missing a wow factor). Pam’s faked water-break really set the tone for a plot line full of fooling, or rather foolishness. Andy chided Daryl and Jim for sarcastically undermining his earnest attempt to entertain the staff only to be schooled in return for not appreciating their efforts to appease him by wearing garish hot pink trucker hats (trucker hats made their umpteenth comeback on NBC last night). Robert California should have been humoring Kevin, the most irritating character in this entire Thursday lineup, when he indulged his moronic cookie-in-the-vending-machine metaphor, but he wasn’t, and then he realized it wasn’t a metaphor. James Spader’s idiosyncrasies wore thin here, too. His habit of arriving at the office only to behave oddly adds less and less to an ensemble of characters already doing exactly that. The Battle of Schrute Farm was basically a beet joke in disguise, adding a patina of historical relevance, however mischaracterized, to Dwight’s proud home. Everything circled back around to the paper company and how the people who work there need it to be so much more. Again, this is why the original series remains better: It understood how limited the joys of a job truly were and, in its brevity, reflected that. The Office is stuck in its own meta universe, struggling to overcome the same banalities as its characters — and maybe, if Community creator Dan Harmon is out of a job, he can explain this to them.

Trailers of the Week: Catch .44, The Iron Lady, and Titanic 3D