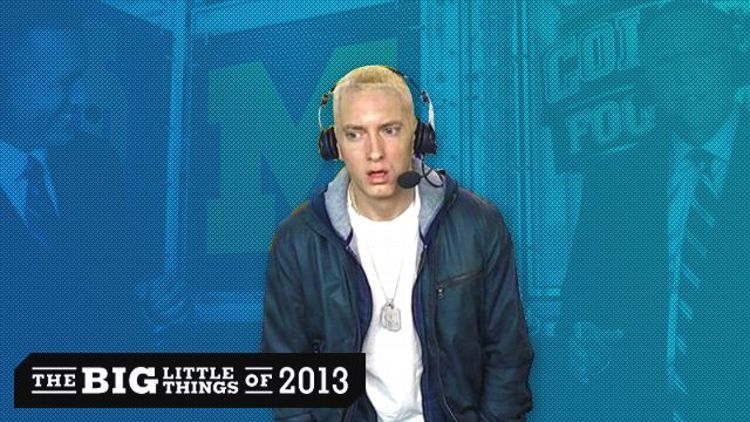 I had spent the day with my father at the hospital. He was not responsive and did not seem to recognize that I was there; I was actually hoping this was the case, since — if he had been conscious that I was in the room — it would likely mean he was equally aware of everything else that was happening, all of which was terrible.

That night I was back at my brother’s farm, watching Notre Dame play Michigan. My dad loved Notre Dame football, so the game adopted a strange symbolic significance in my mind. I knew he wasn’t watching it. I knew that was impossible. Throughout the first half, I wondered how many casual discussions I’d had with my father about which high school players Notre Dame was in the process of recruiting. It sometimes seemed like the main thing we talked about.

Tommy Rees threw a bad pick late in the second quarter and Michigan took a 27-13 lead. At halftime, I went into the basement to get more beer. When I returned, this was on the television:

Mass media makes a lot of simple things confusing. One of these things is the recognition of age and maturity. Whenever I watch sports on TV, I always feel like I’m watching athletes who are somehow older than I am, even though this is almost never true (even when I watch golf). It infantilizes me. Meanwhile, seeing Eminem generates the opposite sensation: We’re the same age, but it often feels like he’s 15 years younger. When The Slim Shady LP was released in 1999, I was already a full-on taxpayer; his work was brilliant, but also juvenile. It was like Zappa. His worldview seemed like an inaccurate reflection of the generation we both occupied. I knew he was the most technically proficient rapper I’d ever heard (at least in terms of wordplay and verbal dexterity), but I did not relate to him in any context that wasn’t a self-construction. This falls in stark contrast to my relationship with Brent Musburger, a stranger whose intertwinement with my existence is unnaturally deep. The number of raw minutes I’ve listened to Musburger speak aloud undoubtedly dwarfs the amount of time I’ve spent listening to almost anyone I know personally. (I mean, there just aren’t that many non-cult scenarios in which it’s normal to listen to the same person talk for three and a half straight hours on a weekly basis for 30 years.) I have a bizarre ongoing fantasy in which I randomly meet Musburger in a TGI Fridays and we end up watching a MAC game together on the bar television; I imagine Brent expressing enthusiastic opinions about the complimentary pot stickers. So now I’m watching this unnatural cultural collision (contrived by ABC for purposes of marketing), and I instantaneously find myself annoyed by the online reactions that have not yet been written. I know everyone is going to insist this interview is awkward and idiotic and hilarious. But I’m in the mind-set to be moved, so it moves me. I pretend like it doesn’t, but it does.

Here is Eminem, placed in a situation where he knows he will be mocked if he doesn’t make his discomfort obvious. He’s promoting the use of “Berzerk” as weekly bumper music for college football, a song that (not coincidentally, I’m sure) samples a Billy Squier riff so familiar that it seems totally reasonable to hear it on prime-time network television. He knows he’s actively re-branding himself as the classic-rock version of hip-hop, which is both his best commercial option and (almost certainly) an evolution he never imagined or desired. But he’s being cool about it. When Kirk Herbstreit asks what about his new album makes him most excited, he gives two answers that are different versions of the same truth: His first response is, “Nothing.” His second is, “To just be done with it.” This does not seem like sarcasm; I believe it’s how he really feels about this record, and maybe about his whole career. Still, he’s trying to make this work. He’s trying to build a weird bridge to somewhere reasonable. He forces his way through the publicity he knows is his responsibility, he sincerely compliments Brent on his broadcasting career, and he goes out of his way to note the passing of Pat Summerall. Musburger tries even harder: He drops Rick Rubin’s name into the conversation and asks a needlessly specific gambling question that derives (for reasons unknown) from the state of Montana. Who are these anonymous Montana-based degenerates who want to know Eminem’s take on an NFL point spread? And why is Eminem so reluctant to respond to that innocuous query?

I suspect it’s because he actually cares about his answer.

People don’t worry about the idea of a Generation Gap anymore. That notion has been replaced by a Technology Gap. The possibility of parents and children sharing the same cultural interests has increased dramatically over the past 25 years; today, the central bifurcation is how that communal culture is accessed and interpreted and experienced. Yet there are still certain chasms forged by the rudimentary passage of time. Musburger is, by all accounts, a deeply conservative guy (I love whenever he announces Cal home games, because he inevitably says something amusing and reactionary about the student body). It’s hard for me to imagine him listening to a song like “Berzerk” without wondering what the hell happened to the world he helped create. But you know what? He’s still engaged with that world. He still wants to know what Eminem thinks about the Detroit Lions. Sure, you could argue that he’s just doing his job. But there is no condescension in his voice. There is no distaste with the assignment. What we have is an old man saying, “Look — I don’t really understand what you do or why people care. But I don’t need to understand it in order to know it has value.” And what we have in response is a younger man saying, “I realize you have to treat me like a celebrity, because that’s the reason I was pushed into this press box. But I am not your equal. That’s not possible. I will never respect myself as much as I respect you.”

The promotional segment ended and the game returned. Notre Dame mounted a comeback but failed in the fourth. I finished the rest of the beer, took an Ambien, and went to bed around midnight. Ten minutes later, my brother knocked on the door and said the whole family had to go back to the hospital immediately. So that’s what we did.