My Cheetah of the Year: On Cameron Diaz’s Performance in ‘The Counselor’ 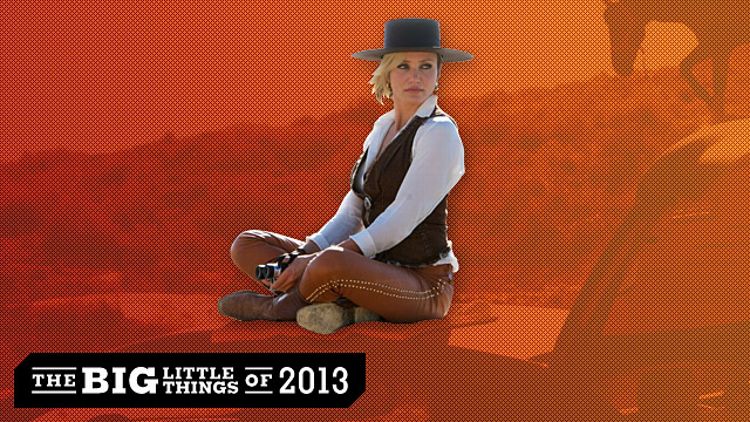 Warning: The next few paragraphs contain major spoilers for Ridley Scott and Cormac McCarthy’s film The Counselor. But so, for that matter, did the excerpt from McCarthy’s screenplay published in The New Yorker’s summer fiction issue, months before the film came out, because apparently positioning this movie as literature-with-pictures by a Pulitzer-winning novelist took precedence over not revealing ahead of time whose head gets sliced off. The front cover of the trade-paperback edition of the script says “Now a Major Motion Picture,” which is a curious thing for the publishers of a screenplay to feel obligated to advertise. Why else would the book exist?

For what it’s worth, the script for The Counselor does read like a novel, in that it reads like a novelist wrote it. The length and depth of the stage directions would shame Alan Moore. (“Along one wall are eight large oil portraits of celebrities: Bogart, Monroe, Dean, Elvis, Lennon, Miles Davis, Billie Holiday, and the Portuguese Formula One race driver The Marquis de Portago. The paintings are bright and quite striking but neither lurid nor cheap. They are oil paintings that look like really high quality pastels.”) The dialogue is often eccentrically beautiful and appears to have been typed with zero consideration of the fact that people would someday have to say all these words out loud. One of the most enjoyable things about the absurdly underrated film McCarthy’s Counselor script became (“D,” raved audiences surveyed by CinemaScore) is watching the actors find different ways to sell these lines as normal human speech; it’s like they’re all trying to coax music from some weird multi-chambered brass instrument they’ve never seen before and aren’t even sure which end to blow into.

But then there’s Cameron Diaz, who’s doing something else entirely. Diaz plays Malkina, who lives with Reiner, an affably shady businessman played by Javier Bardem. Malkina is Reiner’s girlfriend, the crown-jewel accessory of his increasingly lavish lifestyle. Typically, you put a woman like Malkina in your crime story to illustrate something about the man she’s with — usually that he’s a real bastard, as illustrated by his tendency to belittle his lady or knock her around. But this isn’t a traditional crime story, and the main thing Malkina illustrates about Reiner is that he’s doomed. Malkina has a gold canine tooth and cheetah-spot tattoos running down her back. She keeps two actual cheetahs as pets. The first time we see her she’s watching them hunt a rabbit. When they catch the rabbit she looks disappointed that she can’t eat it herself. She’s the movie’s apex predator; she’s always telling people she’s hungry because circumstances require her to wait until the third act to feed.

“She’s manipulative and calculating, so she uses her showstopping wardrobe as her façade to distract from what she’s really doing,” Diaz’s Counselor stylist Paula Thomas told The Hollywood Reporter, but that’s not really it. Through her clothes — animal prints for the hunt, then that Splinter Cell–chic digital-camo dress — Malkina’s actually telling everyone exactly who she is. And on some level Reiner understands this, even if he doesn’t want to believe it. He knows Malkina is better than he is at reading the graphs and tickers on the stock-trading terminal in his office, possibly because she’s the kind of cold, detached realist who speaks in gnomic Vulcan-Mametisms like “To miss something is to hope it will come back” and “I think truth has no temperature.” Confiding in Michael Fassbender’s character early on, Reiner sighs, “I love smart women, but it’s been an expensive hobby.” He can’t grasp just yet how much it’s going to cost him — he’s no more prepared for her to slip the bonds of her gun-moll role than we are. This failure of the imagination is his downfall.

There are two aspects of Diaz’s performance as Malkina that even people who didn’t see The Counselor felt qualified to talk about, but nobody talked about them for the right reasons. First, there’s the thing about the accent. In the script, Malkina’s from Argentina. In the movie, it’s Barbados. The story is that when studio execs saw the film for the first time, they demanded that Diaz re-dub her entire performance, because she’d delivered all her lines in a strong Barbadian accent that, per The Hollywood Reporter, “sounded like Rihanna.” In the finished film, the accent has been reduced to a lilt, and you don’t notice the dubbing unless you’re really watching for it, although there’s still that underbuzz haircut to contend with. Would it have been a better movie with Diaz going full Barbados? Would it have been a better movie if Rihanna had actually played Diaz’s part? I don’t want to argue that the best choice to play a Barbadian in a movie isn’t, y’know, a Barbadian; on the other hand, I saw Battleship. Either way: A million click-bait gossip sites ran with the accent story, often jumping with inexplicable glee to the conclusion that the movie’s paltry $8 million opening weekend was because Diaz’s character talks funny.

Our receptors are so fried as a culture that this is how we process risk-taking: HA HA FUNNY VOICE MOVIE DO BAD. So I’ll stand here on the Internet’s front lawn and scream it: Diaz’s performance as Malkina is a bravely batshit series of choices, and it’s compelling not in spite of whatever Rihannic qualities she attempted to channel but because of them. Malkina is — or should have been — a psychic cousin to James Franco’s Riff Raff riff Alien in Spring Breakers, a mirror reflecting our own confusion about race and culture and gesture back at us. Why can’t movie acting be karaoke? Why can’t Cameron Diaz write fan fiction about a rock star between the lines of her script? (Perfect rhetorical answer, per Grantland’s Emily Yoshida, who I should note did not actually like Diaz in this movie: “[B]ecause lines like ‘The hunter has a purity of heart that exists nowhere else’ should definitely be said in as normal a voice as possible.”)

I have not talked about the part in which Malkina makes love to a car, a moment I assume would already have been lampooned in a Scary Movie movie if The Counselor had actually made money. It’s definitely the funniest scene in the film — Bardem’s Reiner confessing to how the image continues to haunt him is priceless — but it’s also crucial to the story of Reiner and Malkina and how thoroughly she has dominated him from the beginning. And it’s yet another example of Cameron Diaz courageously throwing away leading-lady mystique to go all the way in on a weird and filthy moment. Everyone remembers Diaz styling her hair with secondhand semen in There’s Something About Mary; we don’t talk enough about the penis song from The Sweetest Thing, a bad movie that still deserves credit for trying to make the female-fronted raunchcom happen almost a decade pre-Bridesmaids, or about Diaz basically playing John Winger from Stripes in the equally important Bad Teacher. No other actress could have Tawny Kitaen-ed that Ferrari and made the moment play. I’m assuming we’ll spend a lot of time as the year winds down praising Sandra Bullock for dialing back the goofy-cutes for Gravity, but for me it’s Diaz, as game for craziness as ever, who boldly went where no other A-list actress would dare to go.