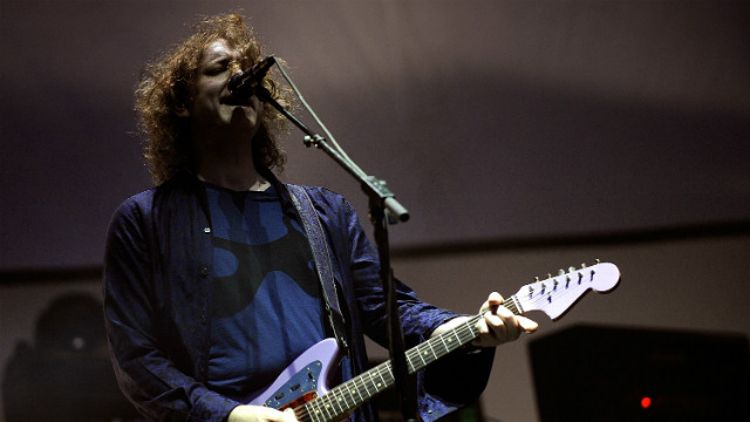 There’s maybe one instance out of 10,000 in which Justin Timberlake might learn something about how to be a pop star from a soft-spoken, reclusive Irish indie-rock icon who’s released four full-length albums in 28 years. That one instance occurred Saturday night.

By now you’re probably aware that Timberlake is putting out a record called The 20/20 Experience in March. It is Timberlake’s first new album in seven years. As is custom for a singer of his stature, Timberlake has teased The 20/20 Experience with increasingly grandiose promotional flourishes. Last month, he posted a lyric video online for the album’s first single, “Suit & Tie.” On Saturday, he performed at an invitation-only concert in New Orleans that seemingly everybody in the vicinity of the Super Bowl with a Twitter account attended. This Sunday, Timberlake will preview his latest material in front of his largest audience yet at the Grammys.

There’s no questioning the effectiveness of this strategy as far as getting the word out goes. But all the buildup has added another layer of hype to an already heaping mountain of high expectations that The 20/20 Experience is unlikely to fully satisfy. (The lukewarm reaction to “Suit & Tie” bears this out.)

Then there’s Kevin Shields of My Bloody Valentine, who after decades of possibly-but-not-really preparing to finally drop the follow-up to his band’s landmark 1991 LP Loveless — a record that somebody once declared the greatest rock record of the past 20 or so years — suddenly decided to just do it already on Saturday, putting it up for sale on My Bloody Valentine’s bandwidth-deficient website late in the afternoon. m b v’s sudden appearance — which Shields hinted was coming in interviews going back nearly a year, though given his track record few believed would really happen — might have seemed like an oddly perfunctory conclusion to one of the longest waiting games in rock history. But it was also shrewd and surprisingly knowing about how music fans consume new albums in the age of social media, and how bands taking back control of how their music is disseminated can restore some of the excitement that used to be tied up in record release dates before the present era of all-streaming, all-the-time access.

Think of the small handful of recent albums that felt like events the moment they came out: Kanye West’s My Beautiful Dark Twisted Fantasy, Radiohead’s King of Limbs, Jay-Z and West’s Watch the Throne, Frank Ocean’s Channel Orange. All of them were released, more or less, the same way m b v was: with little advance warning, and to the whole world (including the press) at exactly the same time. While it’s true that all of those records would have been sought-after and discussed had they been released conventionally on a Tuesday like every other new album, the surprise element (not to mention the dearth of access beforehand) made hearing them and instantly hashing out your initial impressions online seem more urgent — not to mention a lot more fun. By following this model, My Bloody Valentine succeeded in making a record by a bunch of 50ish-year-old art rockers the biggest thing in pop culture for a few hours.

In an even more fortuitous, retro, and probably accidental twist — though probably not accidental because Shields is just that much of a controlling perfectionist genius — My Bloody Valentine’s website crashed almost immediately after the album was posted, which meant fans had this record sprung on them, and then had to wait several hours before hearing it. Following along on various social media platforms as people waited for the website to come back up was the closest thing to standing in line at a record store for a few hours before midnight.

While monitoring Twitter, I watched Martin McDonagh’s Seven Psychopaths, an absurdly violent, not-quite-profound riff on the mysteries of the creative process and the search for spiritual harmony amid humanity’s chaotic senselessness. Colin Farrell plays Marty, an alcoholic screenwriter who announces in an early scene that he wants his next movie “overall to be about love … and peace, but it still has to be about seven psychopaths.” My Bloody Valentine owns, in rock music terms, the emotional quality that Farrell’s character describes — the tension between beauty and violence that is both soothing and discomforting, gory and celestial, and loaded with gut-level power and yet not tangibly of this Earth.

On Loveless, those elements were jumbled together in a big disorienting blur; on m b v, they’re separated into distinct elements stacked on top of each other, culminating in a roundhouse wallop in the record’s final third. The first six songs on m b v play like a reward for loyalists — they’re essentially elaborations on Loveless, using those familiar snoring-angel guitar tones on the “loud” songs and the whispery, “I’m crashing at 6 a.m. after doing E all night in the early ’90s” atmospherics on the “soft” songs. The feeling you get from this part of the record is relief; after so many years and so many bands doing half-assed approximations of Loveless, it’s nice to know that nobody does as good of a job sounding like My Bloody Valentine as My Bloody Valentine.

The reassuringly pretty part of m b v ends with what’s by far the record’s poppiest cut, “New You” — the song’s arms-crossed funkiness makes it this album’s “Soon” — and then violence and disorder take over. I’ve played m b v four times now — three listens late Saturday night, and one listen Sunday. Based on this limited sampling, I lean toward declaring m b v a legit “great” record, and that’s due almost entirely to the last three songs. I really like the first six tracks, but the final three come closest to justifying My Bloody Valentine’s rep for blowing the backs off skulls.

It’s not that My Bloody Valentine reinvents rock music with these songs, as many like to claim about Loveless. It’s pretty clear that they bear the hallmarks of U.K. Britpop and electronic music from the late ’90s, when Shields initially began work on m b v. It’s a version of now that was dreamed up as the future back in the late 20th century. What has my brain tied up in knots is how these tracks seemed to influence rock history without actually being released. When I hear the album-closing “Wonder 2,” it sounds like the germ of Kid A — I sort of think that Thom Yorke and Jonny Greenwood ought to be rounded up and interrogated about whether they broke into Shields’s studio and strip-mined this song for future elements of “The National Anthem,” “Idiotique,” and “Treefingers,” since it sounds like those three tracks playing on a simultaneous loop. Or there’s the bruising instrumental “Nothing Is,” which is nothing but a hammering punk-rock guitar riff and a furious two-step drum beat pounding the shit out of each other for three and a half minutes; it could pass for a severe parody of Japandroids’ classic-rock distillations. My favorite song right now is “In Another Way,” perhaps because its expansive sci-fi synth swooshes and Internet dial-up guitars sound like a version of rock music that may still lie ahead.

For all the thrills that m b v offers up, there’s also a vague feeling of disappointment. If only this record had come out when it was supposed to — whether that was the late ’90s, the early ’00s, or when My Bloody Valentine first reunited in 2008. Then it could have had an actual impact on the course of rock music. No matter how good m b v is, it still feels like an add-on to an already canonized discography — as all late-period “reunion” records like this inevitably are. It may have come after Loveless, but m b v isn’t a true follow-up, because the time for follow-ups has long since passed. But m b v is worthy of this bit of high praise: When you play it, topping Loveless no longer seems like a relevant concern.

Bow Down to the Queen: Notes on Beyoncé's Halftime Show