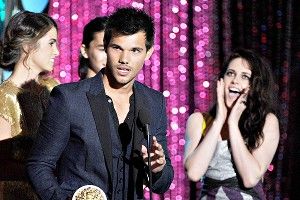 Soooooo? How’d we all do in our MTV Movie Awards pools? Guys, I really thought teenagers would be more enamored of The Artist! That’s $500 I’ll never see again.

Due to the Movie Awards’ eccentric eligibility period, the last Harry Potter and penultimate Twilight movies (both of which came out in 2011) faced off against the first installment of The Hunger Games (which came out in March); fortunately, MTV voters generously spread the love around the three teen-targeted franchises, and threw a couple to Bridesmaids as well. Also honored by MTV voters was Johnny Depp, recipient of the Generation Award (basically, the show’s Lifetime Achievement Award), though I think we can all agree Depp isn’t fit to carry previous Generation Award winner Chewbacca’s jock. (The full list of winners — complete with clips — is here.)

The biggest event of the night didn’t involve any of the winners, though: Gary Oldman, Christian Bale, Joseph Gordon-Levitt, and Christopher Nolan all appeared to introduce an exclusive new montage of scenes from The Dark Knight Rises. And when I say “exclusive,” of course I mean British tabloid The Sun ganked it and posted it this morning.

It’s all right, but the guy playing Bane in this thing is no wiener.