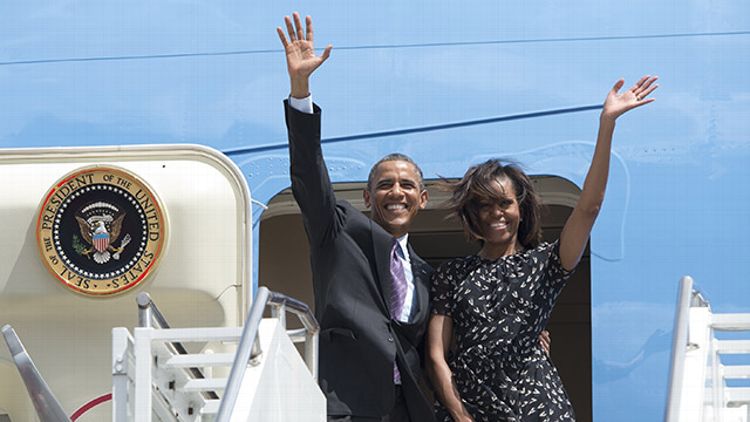 Kanye West recently spoke to Ryan Seacrest about a number of things. Here’s one of the things he said.

There’s no way Kim Kardashian shouldn’t be on the cover of Vogue. She’s like the most intriguing woman right now. She’s got Barbara Walters calling her like everyday … and collectively we’re the most influential with clothing. No one is looking at what [President] Obama is wearing. Michelle Obama cannot Instagram a [bikini] pic like what my girl Instagrammed the other day … so it’s to say when we are there and [editor-in-chief of French Vogue] Carine Roitfeld supports my girl, that’s a breakthrough … there’s a wall of classism that we are breaking through.”

I can only imagine this is what Michelle Obama had to say in response.

That makes me the First Lady of the United States of America. Me = Michelle Obama.

I hope all is well.

You know, Kanye, I woke up this morning. In the White House. And one of my aides told me she had something to show me. Something that would make me laugh. A “cute” thing, if you will.

It was a series of quotes, Kanye. About my husband and me. About my Vogue magazine cover. And fashion. And classism.

They were your quotes. You were the cute thing, Kanye. And my aide was right. It did make me laugh. Oh, what a hearty White House laugh it was.

Tell me, Kanye, what’s your goal with this? Why us? Are you still mad about my husband calling you a jackass a few times? Is that why you’re focusing on me instead of on all the other women who have been on the cover of Vogue?

That’s what this is all about, isn’t it?  I know Barack never did apologize for the name-calling, because you know how you men are with your stubbornness.

But it’s more than that. It’s bigger than fashion. To you, this has become a couple vs. couple thing.

I once overheard some of our summer interns talking about you — about how mad you get when you’re compared to other rappers, because your peers are Jesus and Jobs and Walt Disney. I heard it and actually respected that. It shows you have some drive to be a great man. You should fight to get your respect. I see my husband, the President of the Free World, get disrespected every day. And it tears me apart.

So you have to understand where I’m coming from when I say it’s laughable for my 21-year marriage to be mentioned on the same website as your thing with Kim.

Imagine if someone compared you to Papoose, Kanye. Well, you’re Barack’s Papoose. And yes, Kim is my Remy Ma.

My husband’s not moving our family out the country so you can’t see where we stay. Because he runs the country, you see.

And, again, we live in the White House. Very visible.

Look, Kanye, I’m a fan. You had me the second you brought along Uncle Charlie Wilson, and there’s no turning back. I don’t think you’re crazy at all, and in fact fully think you’re saying things that other people are scared to articulate. And, of course, Chicago will always bring us together.

Knowing that, never think that I’m not from Chicago for one second. Barack may be from Hawaii, but I will always be from that 312.

As a woman who loves fashion but never sought to be an iconic figure of some sort, I understand where you’re coming from. And your frustrations. You’re both deeply embedded in fashion, you and Kim, and daring to match, with the man skirts and silly string bikinis. I hear you even have a little pop-up store next to hers that sells nice Confederate flags.

And there’s me, a semi-conservative dresser with my fashion not at the center of my life, and somehow I still ended up on the Vogue cover. And, to make matters worse, I didn’t even ask.

They came to me. And get this, I actually had to think about it.

But next time, Kanye, if we can agree to squash this, I will decline and tell them to ask Kim. Will that make you happy? Will that end classism? Will the inclusion of your born-rich future wife break down the walls that my trailblazing old-ladyness seeks to build up? Just let me know.

Because, at the end of the day, who really needs to be on the cover of Vogue for a third time?

Send my love to Kim and baby Nori.