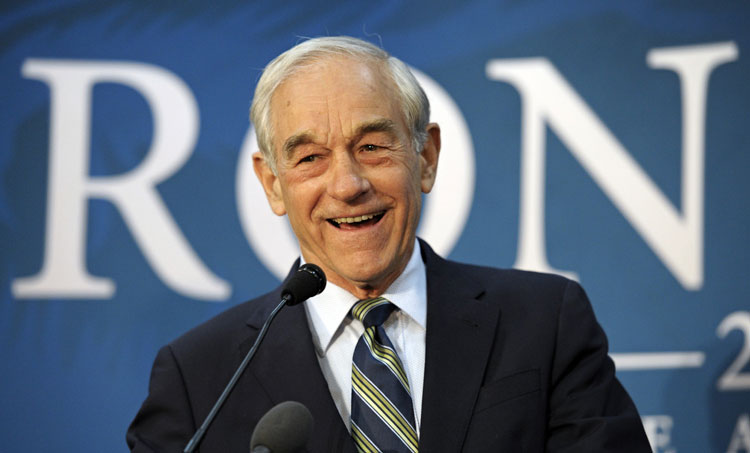 Last night, a Twitter user from the San Francisco Bay Area — his handle was “Lando Calrissian’s Dog” at first, but he’s going by “A Serious Journalist” now) decided to liven up a dumb hashtag game (“#MakeRacistJokesLessRacist” — by appending said tag to the words “Ron Paul died.” (Reached for comment and asked if it would be correct to identify him as a journalist, A Serious Journalist replied “that would be hilarious and you’re free to do it, but the only journalism I’ve ever done was pretend Ron Paul died.”) Representative Paul was still alive and running for President, but a Ron Paul retweet-bot dutifully RT’d this message anyway. A few Paulites seem to have taken the bait and expressed concern for their leader’s well-being, but for the most part this was less hoax and more roast. By 1 AM, “#RIPRonPaul” was #1 (with a bullet! Shot from a gun the nanny-state doesn’t want you to have!) on Twitter’s Trending Topics chart, as the Internet’s finest dumb-joke craftspeople took turns sarcastically pouring a little liquor on the curb for Dr. No.

It should probably go without saying that these jokes would be in poor taste if Ron Paul had actually died after being stabbed by the Hamburglar or stung by wasps; there is probably also an argument to be made that they still are, because Ron Paul is, y’know, a person, but at the same time there’s technically nothing more libertarian than using your First Amendment rights to spread ridiculous, surreal falsehoods about a strict Constitutionalist politician. Plus, anyone who reads “#RipRonPaul drove his dirt bike into a huge bees nest and then took all his clothes off and tried to kiss the bees while yelling at the bees” and needs to hit another news source to make sure it isn’t true probably lives in a state of blind panic most of the time anyway, because when you can’t think, the world is a scary and confusing place and every shadow has a whispering dwarf in it. Anyway: This stuff is comedy gold! Bury it in your comedy-yard so that when the Federal Reserve’s shortsighted refusal to return to the comedy-gold standard brings on the comedy-apocalypse, and you’ll get the last laugh! Literally!

YouTube Hall of Fame: The Best Movie Trailers Ever