The Alien Mystique: Megan Draper and the Upending of the Mad Men Universe 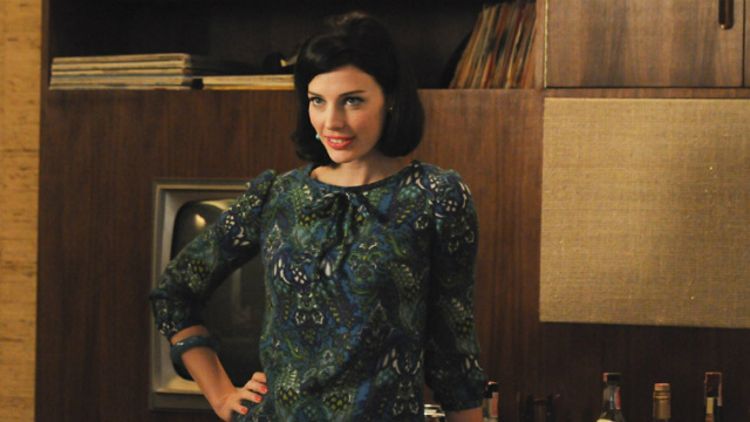 In 1966, an alien crash-landed on Earth. He was an unlikely figure, even considering his cosmic origins: speaking English (if a little oddly) and draped in the trappings of counterculture. He admired the humans he encountered in New York City, though, and soon came to work among them. Thanks to his surprising abilities he was eventually accepted by the Earthmen, even if he could never truly be one of them.

It can’t be a coincidence that Matthew Weiner, Mad Men creator and control freak par excellence, introduced his own Martian, copywriter Michael Ginsberg, the same year Marvel Comics unveiled the Silver Surfer. Like Holocaust baby Ginsberg, the Surfer was an improbable survivor, the product of a desperate sacrifice, his still-beating heart a constant reminder of those left behind. Ginsberg feels like an alien, both to himself and to his new colleagues at Sterling Cooper Draper Pryce, yet he is eager to belong. As long as he keeps his voice down and his otherworldly skills focused on mundanities like cologne ads, his stranger-in-a-strange-land eccentricities (like understanding The Beatles) can be tolerated. Michael may call himself a spaceman, but inside the sturdy walls of a Manhattan office building, he’s really just another Other, not all that distinct from fellow outsider Dawn. Their differences are folded into the established culture easily enough because, when you get right down to it, they need their jobs more than their jobs need them.

Of course, the Silver Surfer didn’t come alone, and neither did Michael Ginsberg. Both served as harbingers for leggy, purple-mini-skirted giants who possessed the ability to unmake worlds. One was called Galactus. The other is married to Don Draper.

In a cable landscape overrun with flesh-eating zombies and flesh-slashing swordsmen, Mad Men has always offered a welcome dose of dedicated, if dated, reality. This season in particular has been masterful in its telescopic dissection of all the ways people collide and relationships crumble: quickly, painfully, and intimately; by giving your heart (and your ski pole) to someone else’s wife, or by listening to the truth-telling orchestras lurking inside that bottle of Stolichnaya. No show on television is more lyrical or insightful on the subject of human frailty and the limits of interaction. Yet while the themes may soar into the subjective, the imagery has remained stolidly grounded. Mad Men’s most memorable moments are, like the ads that made Don Draper’s reputation, built around the canny placement of familiar products: a Kodak carousel, a John Deere lawnmower, a box of Bugles, a mouthful of Howard Johnson orange sherbet. But recently Weiner has begun blasting his metaphors into outer space. Pete Campbell’s baby blues once signified his youthful vigor and ambition. Now we’re told that the poor bastard’s peepers are as icily distant and dead as the view of Earth from Planet Ginzo. Sterling Cooper Draper Pryce is still the center of the universe for its employees. But for the first time we’ve caught a glimpse of how insignificant that phrase really is, especially to those on the outside. The sneering is louder now, from Quebecois socialists and teenage rock-and-rollers alike. In the words of critic Starlee Kine, the alien invasion of SCDP has begun.

Last season, when Ida Blankenship, the one-time “queen of perversions” turned wrinkly crank, died at her desk, Bert Cooper eulogized her with surprising elegance: “She was born in 1898 in a barn. She died on the 37th floor of a skyscraper. She’s an astronaut.” In the moment, his speech seemed epic: a triumphant tale of a Lady Icarus,  now fallen — but look how high she flew! To an elderly company man like Bert, nothing could be greater than achieving orbit within the highly pressurized atmosphere of an ad agency. To his generation, the office isn’t merely a vessel of self-betterment, it’s a final destination. (It’s a perspective Bert takes to heart. The poor bastard hasn’t had a desk of his own in years, but he’s still there, puttering around in his socks. Have we ever even seen Bert outside? He’s less John Glenn and more Laika, the doomed cosmodog, floating in circles for eternity.) But times, as Mad Men so aggressively demonstrates, change. What’s the value of a dried-up astronaut when you’ve got a gorgeous Francophone étranger able to effortlessly imagine colonists gobbling space beans on the moon?

Until now, the propulsion engine of the show was Dick Whitman and his limitless appetite. The identity-thieving son of a whore, Dick bought the American dream nearly as well as Don Draper could sell it, using it to rocket himself from the hobo code to Norman Rockwell suburbia. But somewhere along the way, he ran out of fuel. Suddenly adrift, he’s now the guy with the young wife and the old-fashioned taste. When Don shakes his head at Ginsberg’s music or raises an eyebrow at the lustful anarchy backstage at a Stones concert, he doesn’t seem stubborn, merely surprised. It’s not that he refuses to acknowledge the changing world, he simply didn’t notice it moving on without him. It’s a rude lesson in the limits of being entirely self-made: You can only go as far as your imagination is capable of taking you.

It wasn’t always so. From his first season, spent canoodling with assorted beatniks and Jews, through his California dreaming, Don was always at his most comfortable when surrounded by youth and difference. But something changed in last season’s “The Good News.” Don’s awkward attempt to bed Stephanie, Anna Draper’s lissome niece, marked a sudden transition from hedonist to creep, from participant to observer. Losing Anna cost him his past, but it also changed his future. This vanishing mojo has been remarkably painful to observe, like watching James Bond turn into your dad.

Oblivious, Don thought his marriage to Megan would be a perfect union of gravity-defying soul mates. It’s not that he wanted to steal her youth; he thought it was theirs to share. But as we learned in “The Lady Lazarus,” Megan’s still hungry while Don appears to have reached his limit ages ago. “I was raised in the ‘30s. My dream was indoor plumbing,” he joked last week without laughing. Now he’s got his bathroom and a white carpet and a lot of time to sit around contemplating them both. It turns out Don Draper had more in common with Ida Blankenship, his dead secretary, than the vivacious beauty who replaced her. “Joan knows exactly what I need,” he said at the time. But he wasn’t really listening.

While Don sinks, Pete seems to have already hit bottom. He’s a decade younger, but doomed to repeat the same mistakes, unable to dream of anything bigger for himself than a new office, maybe one with a window that he’ll never see the other side of. Don tried to turn his wife into a colleague and Pete is desperate to transform his co-workers into friends. One thing that Sally Draper has probably learned in therapy — or will in the future because after the Codfish Ball you know those bills are going to be epic! — is that giving away the power to determine your own self-worth like that is the very definition of hopelessness. (It’s also the definition of advertising.) Yet after four seasons of desk jockeying and day drinking, it’s all the cast can manage. Only crazy-as-a-silver-fox Roger Sterling — thanks to a well-timed acid trip — seems able to steer into the slide. Pete, as we’ve recently learned, is a terrible driver. As for the rest of them, the office is their Apollo shuttle, the only thing separating them from the void.

But not Megan. Initially dismissed as a cheap fling, Don’s foolish French surrender, Megan, it turns out, is the most powerful person ever to step through the glass doors of SCDP. Sure, Lee Garner Jr. could make Roger put on a Santa suit, but could he get Don to fall desperately to his knees? Pete still keeps a rifle in his office, but Megan’s bulletproof, immune to the charms of devoting one’s life to pleasing other people. Yeah, she’s good at it, but she’s good at other things, too. Like a true hobo, her greatest strength lies in her ability to walk away. After she spat out his sherbet, Don drove off in a huff, but Megan was the one who vanished. He allowed her to quit, but she was already long gone, his reward an empty apartment and the stoned, noisy caterwauling of a bunch of British freaks. As for Peggy, she was born only a few years before Megan, but already she’s infinitely older. Over five seasons we’ve watched Peggy sacrifice everything only to wind up in the very same place Megan is eager to flee. Where Peggy had to fight and claw just to get a taste, Megan was handed everything on the menu, shrugged, and ordered ice cream instead. Generation gaps are only threatening to those on the wrong side of them. While Don and Peggy were stuck squabbling over artificial dessert topping, Megan zooby-zoomed her way into the stratosphere.

When Jack Kirby and Stan Lee created Galactus in 1966, they did so because they were bored with the standard evildoers, all of whom played by the same rules as the heroes who stood in their way. What Kirby and Lee wanted instead was something epic, something existential. Not a supervillain, or really a villain at all. Rather, a force of nature. Unlike the anguished Silver Surfer, Galactus couldn’t be reasoned with and he couldn’t be tamed. He came to devour the globe, not out of malice, but because it was there and he was hungry. So too has Megan Calvet tipped Don — and, by extension, Mad Men itself — off his axis. Why? Because she’s young and she’s not satisfied and, thanks to the Stones, that’s suddenly a groovy way to be. “When is everything going to get back to normal?” Roger asked earlier in the season before tuning in and dropping out. Welcome to the new normal. The aliens have landed. And they don’t come in peace.

Teen Rapper Kitty Pryde Ready for the Haters to Materialize