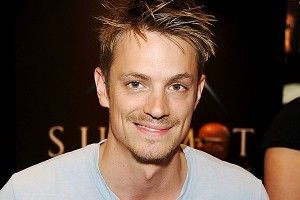 It’s Joel Kinnaman! The actor, who is big-time in his native Sweden, made his American debut last year on AMC’s maligned detective show The Killing, and is now rapidly moving up the ladder: After rumors suggested as much, it was made official over the weekend that Joel will don the suit for the RoboCop remake. This adds to the international bent of the production, as its director is the Brazilian José Padilha, best known for the bone-crunching Elite Squad, which depicted the hectic face-offs between Rio de Janeiro police and the favela drug lords. And the Irish-German heartthrob Michael Fassbender was originally rumored for RoboCop, too.

While that would have been great — Fassby hasn’t missed in years! Years! — you can’t be mad about the Kinnaman casting. If you hated The Killing, it was probably because of its ludicrous plot contrivances, not because of Kinnaman’s character, the hangdog recovering drug addict rookie homicide cop Stephen Holder. His “hip-hop” mannerisms and affectations were dumb in the most glorious way possible; also, he was pretty good at smoking cigarettes in the rain. (His charms might dissipate, however, depending on what happens with his character: If you’re subjecting yourself to more Killing, the second season premieres April 1, and we will eventually, one can only hope and pray, learn whether or not Holder is a bad guy.) Kinnaman, of course, will have to switch up his game to play the monotonous half-man-half-machine anti-crime-abomination-with-heart that is RoboCop, but considering his qualifications — he’s tall, he’s Swedish — there’s no reason to think he won’t be just the man to clean up Old Detroit. And, once he’s done doing that, maybe he can hop back over to AMC, with the suit on, and start blasting people until someone confesses they killed Rosie Larsen?