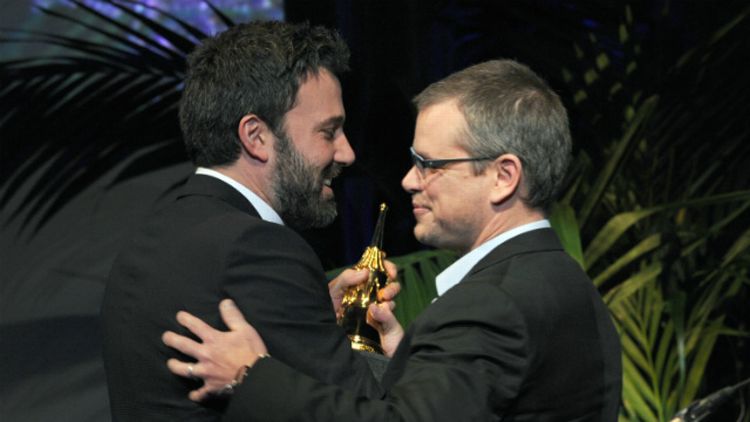 Finally, finally, someone asked Matt Damon about Ben Affleck playing Batman. It was a bit malapropos: The reason Damon granted the interview with The Times of India is that he’s traveling through the country plugging his organization, Water.org, which provides clean water and sanitation to villages. And, alhamdulillah, that didn’t stop the reporter from finally asking Damon about Affleck playing Batman.

In his own estimable words:

I think it will be great. It will be terrific. I know there are a lot of people grousing on the Internet. I just think it’s kind of funny. You know, he’s not playing King Lear. It’s Batman! Certainly within his skill set. If anybody saw Argo or The Town, and all the work he’s been doing lately, it’s way more nuanced and interesting and way more difficult than Batman! Batman just sits there with his cowl over his head and whispers in a kinda gruff voice at people. Bruce Wayne is the more challenging part of the role, and Ben will be great at that.

A ringing endorsement of your public BFF with a tiny bit of “but I mean really, who gives a shit about what Ben Affleck does” and a slight touch of general dismissiveness toward the character of Batman as a whole? Perfectly handled, dude.

I am a little older than Ben. I never saw Robin as older than Batman. Somebody sent me a picture actually (of his face photoshopped on Robin’s body and Ben’s on Batman’s). It was really funny. But it’s safe to say I won’t be Robin.

Possible internal monologue at that point: “How did we get here? Years of crap movies and somehow Affleck’s Batman and I’m Robin? I’m f--kin’ Robin?!! That’s it. That’s it. When I get home I’m watching Gigli.”