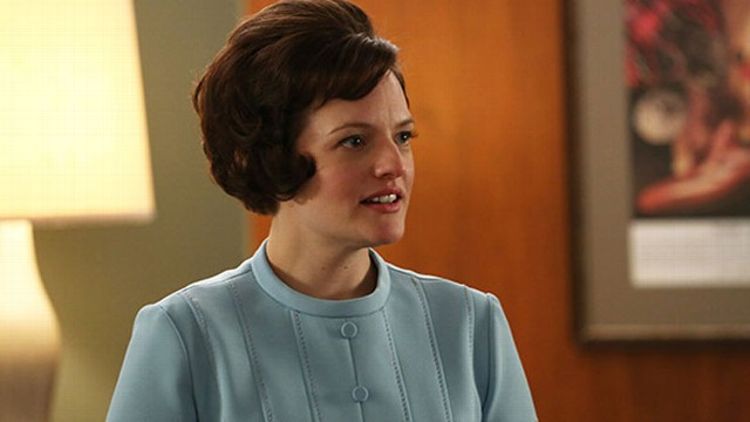 I know it can be annoying to see GIFs loop during a post, but it’s impossible to get tired of watching Pete Campbell fall down the stairs. Do you like when his butt hits the step and then scoots him down one more step, like a final apple bonking him on the head before rolling into a pig’s open mouth? This is a really well-executed pratfall; it almost looks like a real accident. Pete has reason to be all pent-up. Trudy insists on pretending to the world that the Campbells’ marriage is fine, but she won’t do the horizontal Charleston with him anymore. Pete is actively keeping the secret that the company is about to go public, and he doesn’t understand that an honest compliment about Joan’s flawless paperwork skills is much more important to her than some dude she would never touch wanting to bone her. It crosses the mind that Pete and Joan are both technically single and could hook up, but Joan wisely passes on that final nightcap. Like Pete could ever handle that little red Corvette. He barely knows how to drive!

Oh no, I guess Peggy really is Don’s protégée. She may have picked up the skills to rivet a room with a perfectly timed tonal shift in a pitch, but she also absorbed the inability to be happy and satisfied with what you have. Look, Peggy, if you’re going to destroy the loving, respectful, mutually supportive relationship you’ve built with Abe over the past few years on a self-destructive whim, you should at least try for Stan. Ted Chaough? Barf me out, girl. He’s like the Shooter McGavin of late-’60 advertising. I hope he chokes on his buttercup-yellow dickey. While they’d figured out a workable setup at their old place, moving into the new apartment has harshed the mellow Abe and Peggy temporarily achieved last week. Well, maybe not Abe’s. Peggy might just not be made for these times. As much as she wants to be easygoing and chill, she also can’t deal with finding junkie feces in the stairwell or listening to kids setting off fireworks in the street. I don’t know why she was complaining; that music sounded great to me. It’s not like she works from home. The first successful American organ transplant — a kidney by Dr. Richard H. Lawler — took place in 1950. There wasn’t another successful American transplant until 1966, when two Minnesotan doctors transplanted a pancreas. A South African doctor named Christian Barnard completed the first heart transplant in history, almost a year before the Texans Dr. Rosen was so despondent about. Interestingly, transplants were not immediately embraced by the public as a modern medical miracle; critics in the early ’60s claimed the procedures were unnatural. But as successful transplants continued to save lives, the criticism eventually calmed down. Don may have a great admiration for Dr. Rosen’s work, but it seems they’re more alike than he’d like to think. The work of healing people is not satisfying enough for Dr. Rosen. He wants to have his name in the paper too. There’s nothing like clawing your way out of a bad situation, crawling into the daylight, brushing the horrible memories out of your eyes, and realizing you’re in a room identical to the one you just escaped from, with all the same terrible people present. Peggy thought she was getting away from Don, Pete, and Roger, even if it meant she also lost access to Ken and Stan. For a brief moment between seasons (3 and 4), we thought Peggy might get a good haircut that would change her life. Instead, she went directly from her little-girl ponytail with the bad bangs to a Margaret Thatcher–style businesslady hair helmet. There are some things Peggy just can’t have, like a flattering hairstyle or a life that doesn’t involve Don Draper. She had just proved she no longer needs him for the hundredth time; why exactly would he show up again now? Why, to stifle the independent strength he nurtured in her and crush her back into submission!

Don calls Ted “Lieutenant,” and if the Vietnam metaphor isn’t obvious from that, dig this: Don is leading both of them into a battle they will only figure out later is neither winnable nor worth it. The top-secret “XP-887 account” that Roger closes for SCDP so Don and Ted can alley-oop it in Detroit is the Chevrolet Vega, soon to be known as a notorious lemon. What could go wrong? It’s designed by a computer! The Vega wasn’t released to the public until 1970, and it sold well at first. It was Chevy’s attempt to compete with compact cars like Datsuns, VWs, and Toyotas. But then came wave after wave of engine problems and broken parts, leading to some Vegas catching fire. Roger was probably just talking out of his ass as per always, but if he is serious about operating entirely out of his car he ought to come out to Los Angeles. Cars are like cubbyholes here. The other person who should move to Los Angeles: Megan Draper, who needs to strike while the autograph branding iron is hot. She’s gonna need someplace to go anyway when she figures out Don has been schtupping the Annette Funicello look-alike from downstairs, and she’ll probably be happier in California than Canada. If Megan doesn’t pick up on Don’s infidelity soon, it’s possible her perceptive mother will figure it out for her. Marie may have an arch and mostly negative temperament, but her cynical opinions are often correct. She is warm and comforting to her daughter when it really counts, unlike Megan’s overly polemical father, who will be creaming himself momentarily over Mai ’68.

The episode’s title, “For Immediate Release,” refers to the press announcement Peggy is suddenly tasked with producing on deadline for the merger, but it’s also Don’s general direction in life. Don sucks at taking the long view. Even Pete can control his temper around clients when it’s necessary. Don is so dumb he thinks Joan will thank him for exploding the Jaguar account, and not just be humiliated that he is acknowledging the explicit way her partnership came to be in front of other partners. For some reason, nobody cares that Roger is bringing in accounts using his dick as a fishing rod, most likely using a few hundreds tied to the hook as bait. Just like nobody ever brings up that Don has fucked multiple female clients, nobody calls Roger a whore for buttering up Mikey like an egg sandwich. Don’s line about making your own luck sounds awfully close to conservative bootstrapping rhetoric. Does Don really think that everyone unlucky is at fault for their shitty lives? Does he think Roger deserves his stupendous unmerited wealth? Does Roger actually deserve some merit because indeed, he can close, although Sterling’s Gold proved that didn’t mean he can write? Or is an inability to stop closing a fatal Achilles’ heel? Everyone on the show suffers from appetite-related impulse-control problems, except for Trudy Campbell, who easily shrugs off her exiled husband’s morning boob grab.

I wrote about Peggy’s complicated reaction face last week when Abe mentioned their future kids, and I want to single out some more magnificent subtle facial acting this week. The cast comprises masters of small realistic reactions that still read onscreen. My favorites: Don’s face when Herb suggests Don take notes from some kid; Pete’s face when he sees his father-in-law, Marshall Darling, at a midtown boutique hotel … I mean brothel; Peggy’s face when she sees Ted’s face and then hears Don’s polished car commercial voice at the end of the episode; Marie Calvet’s constant face of general disgust with weak human beings; Don’s perfect face when he says “I love puppies.” If we seem sick of Don’s particular line of bullshit, it’s not because it isn’t still incredibly charming. It’s only because we’ve heard it so many times by now. Nothing ever changes, except the name of the brunette woman he’s having sex with. At least he finally turned in a great pitch this week! He’s still got his fastball. The road splits and Don always takes the path that leads to immediate release. Sylvia might not believe that Don picked her out of all the women in New York only because she happens to live on a convenient floor. She probably also doesn’t know about Rachel, Bobbie, Joy, Suzanne, Allison, or Dr. Faye Miller. Even if he sometimes purports to clean up his personal life, Don generally doesn’t even pretend that he’s going to behave less rashly at work, which makes Joan so righteously pissed this time that she reads Don to filth. He’s so high on his accidental victory, he doesn’t even flinch. He acts as if he’d planned the whole thing, and demands credit as though he actually had.

Ted and Don are assuming that merging their two bleeding agencies will create one bigger, better, shiny, new agency. They land Chevy’s car of the future by pitching their agency of the future (crucially, offscreen), before they know what the car or the agency will look like. They are betting on the promise that the unknown is always going to be better than the known, when the truth is it’s always a gamble. A new product is not always a guaranteed improvement over a tried-and-true formula, although capitalism promises us that it is. Sometimes it is! The Graduate, with its CGC-damning Alfa Romeo placement and emphasis on “plastics,” was so popular because it showed something new. The Graduate was one of a wave of films that prophesied the increasing freedom for filmmakers that would lead to film’s “New Hollywood” golden age in the ’70s, and doom it in the ’80s as film studios started focusing on producing blockbusters and merchandisable tentpoles.

The concept drawings are going to be beautiful, the furniture will be top-of-the-line, and the picture windows will be bigger than ever. Still, there is the distinct possibility that the new agency, whatever it’s called, will be ridden with double the death and disease.