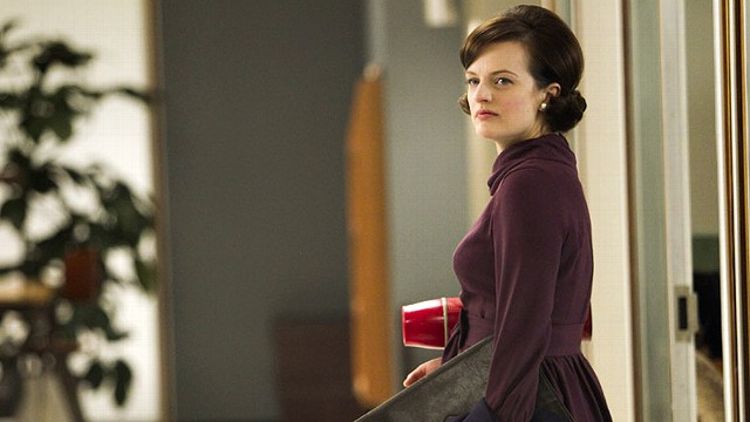 “Our best thoughts come from others.” — Ralph Waldo Emerson

Things your wife won’t do: spin around for a group of leering strangers in her pleated beige audition dress, accept an emerald necklace from a mouth-breather named Herb in exchange for a handsy nightlong dalliance, take a secret milkshake meeting with Ted Chaough. What kind of cologne do whores buy to give to their husbands on Valentine’s Day? Peggy, can you get Joan in here? What’s that? Peggy bounced? Well, where’s Joan? Oh. Gross. Well, are there any lobsters left?

As much as we hoped Joan would throw Pete over her lap and spank him until he bled for even suggesting that she screw a client, she abstained from punishing or punching him and eventually went through with his nefarious plan. There’s a huge line between a fun party girl and a professional sex worker, but Pete has never been one to really vibe on the nuances of human behavior. Everyone knows you’re already a huge slut for free, went the gist of his argument to Joan, so why not get paid for it?

Don offered Joan his protective fatherly advice but no alternative financial solutions. Joan, unfortunately, needs the money. She is desperate, and while her dignity may be theoretically priceless, her willingness to endanger and debase herself works out to a 5 percent share. Don isn’t exactly not a whore himself. He plowed Bobbie Barrett and Rachel Mencken during business hours — and naturally Joan is the locus of Don’s issues about his whore-mom. What’s the deal, Don? So you’re not gonna sex Joan, but neither can anyone else? Or just not for money? Would Joan have gone through with it if Don had pleaded with her first? Or was she ultimately just curious to see exactly how she’d feel, only to learn her lesson the Herb way?

We’ll never know if Peggy could’ve come up with a perfect Jaguar pitch had Don asked her, so we can always imagine that she did. As usual, nobody topped Megan. Unlike the fantasy, the Jaguar is the car that ends up sitting in the garage collecting dust while the dependable, unflashy Buick hauls everyone around. She doesn’t like Don’s “fast cars as mistresses” pitch. It probably reminds her of her awful parents, and it implies that she’s not enough for Don.

Megan is an actressy mix of highly arrogant and very insecure. She thinks she knows her worth (a lot), but she also likes to test it by putting herself in potentially humiliating situations — you know, like a dehumanizing audition or being married to Don Draper. She doesn’t miss the subtext of Don’s mistress talk, even if she turns on the TV for the sake of avoiding marital conflict. So she shows up at Don’s office to fire off a joke and ride him by the skyline, to gain confidence for her audition and remind him what he still has parked at home.

Megan’s ginger friend is an attention slut. Her table show monopolizes the focus of the male creatives besides Michael Ginsberg, who is either as gay as his namesake (and crushing on father figure Don) or nursing a thing for the boss’s wife. Peggy has become used to getting treated terribly and taken for granted by Don — and, by extension, SCDP. Rather than risk internalizing it into lifelong low self-esteem and bitterness, she is setting out for a new start. The new Parisian (dare we say Megan Draperish) Peggy smokes, wears little neck scarves, and knows how to negotiate. She parries and flirts, radiates intelligence, maybe even gives off a little sex appeal when talking to Ted Chaough.

It’s not that Don respects women. It’s that nearly everyone he works with respects them even less. Pete is an opportunist who sees the potential for exploitation in everything. (I wouldn’t be surprised if he tried to get his extremely cute baby in an ad soon.) Roger is a schmuck, through and through. Lane is a depressive realist who gives Joan a quote worth her while, but might just be trying to avoid the uncovering of his embezzlement. Pete takes advantage of Don’s tendency to storm out at critical moments to sway the group into pimping Joan.

Don sees himself as a white knight for Joan, as does Ken for Peggy. Both women see past the romance of their would-be saviors’ grand pronouncements to the unsupportable ground underneath. That Joan and Peggy don’t buy their lines and still like them anyway is why Don and Ken respect them, but it also underscores the impossibility of their friendships. Don and Ken each already picked one woman to take care of for the rest of their lives. They can’t really afford any other cars in their garage, especially not ones they don’t even drive.

Joan and Peggy hate feeling vulnerable against their will. They know all too well the sensation of power being drained away: the wadded-up dollar bills hitting Peggy’s forehead, the debate over Joan’s sexual/personal value during a closed-door corporate meeting where zero women were present; a surprise baby from Pete Campbell, a conjugal visit from Dr. Rapist in Don’s office. Joan’s mom sure knows how to ruin Joan’s day with a Livia Soprano–type dismissive statement or a quip about her Bob Vance–style handyman paramour, Apollo.

Joan wears her whore fur (which we once saw gifted to her by Roger in a flashback) to her “date” with Herb. The whole fallen-woman montage was a little hoary (sorry), but of course Joan thought she could go through with it without feeling anything, only to be surprised by how incredibly sad and disgusting she felt. She wins a small share of the company and a necklace she’ll no doubt throw in the trash. She convinces herself this is control. Don says this isn’t the way he wanted to win Jaguar, but he also Frank T.J. Mackeys his way through a leering pitch to Jaguar about unattainable lays.

Don and Megan both thrive onstage, which means their egos are wrapped up completely in their performances, and the responses to it portend their moods. Even a rousing success can sometimes just lead to postpartum serotonin depletion. Don shrugs off Peggy’s attempts to relate as equals and instead takes out his frustration with other people on her, the most well-worn device in his considerable toolkit of emotional sadism. A sober Freddy Rumsen convinces Peg to step up to the plate. When Peggy came into Don’s office, I thought Don was going to say, “Girl, you better not be pregnant AGAIN.”

Maybe if Don hadn’t let it slip to Peggy that Joan was now a partner she might have at least heard him out. But how many times do you have to get kicked in the head before you realize that if you get too close to Don he is going to kick you in the head? How many lobsters do you have to watch your male colleagues tear into before recognizing that they are never going to share their lobsters with you? Ken Cosgrove was presumably live-composing fiction in his head: “The hot lobsters and creamed spinach fogged up the window as Meggy Plissken stood outside, tracing her tongue in the air, knowing she’d never be allowed into the star officers’ barometric dining isochamber.”

Don smiles in frustration and cannot believe Peggy is dumping him, especially for Ted Chaough. He thinks Peggy will fall back into their 50 Shades of Grey dynamic instantly, and when she doesn’t he insults her, then gives up and kisses her hand for so long that I was like, what is Don doing down there? Is he licking the spaces between her fingers? When the queenly Peggy sailed through the office for the last time into the elevator, I completely believed she might fall down the empty shaft. Someday, scientists will make a television-like machine that you can have sex with, and society as you and I know it will more or less end.

Trailers of the Week: The Great Gatsby, Skyfall, The Words, and More