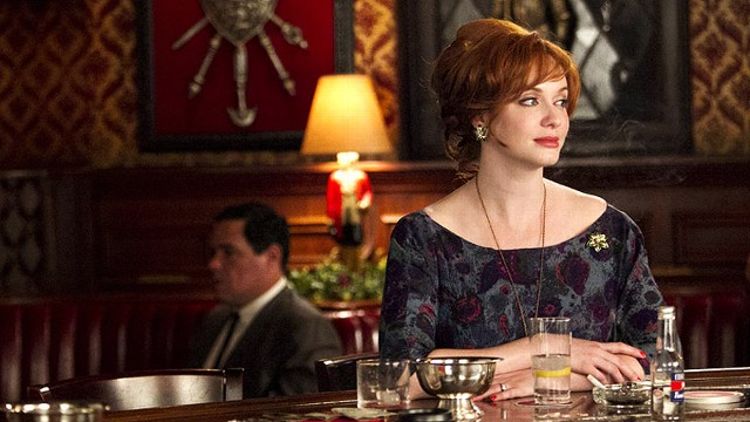 “The past is a mist.” — Harold Pinter

Fan service alert! After keeping it chaste for like a billion years while working together at the various iterations of Sterling Cooper, suddenly Don and Joan decide to explore their sexual tension in more depth. Why now? Because Don believes in consumerism. He advocates not only materialism but options. A car in every color. A dress in every cut. The interiors of both done up in every cloth imaginable. All that buying adds up to something, but it’s not happiness. Megan may take the side of the anti-consumerist avant-garde experimental play she forces her husband to see, but it’s unclear whether she’d still date Don if they had to get around on his bus pass. She might not like nice things in theory, but she sure appreciates them in practice. Then again, those nice things seem awfully stupid when you’re waiting all night for someone to come home.

Lane’s plot line concerning his tax debt was a little thin. The underlying current event is the high British progressive tax levied by Labour leader Harold Wilson that inspired George Harrison to write “Taxman.” Never mind that by 1966 The Beatles were in England’s top tax bracket, as Lane probably is as well, which is why they had to pay a supertax of up to 95 percent. Lane should have moved his money to a Swiss bank account — but more to the point, he could have just told Don. Why didn’t he just tell Don? Don is a master secret keeper who could potentially have figured out how to make the problem go away. That guy can sit on a secret for decades. Now Lane is an embezzler, which will either blow up and pay off in the next three episodes or never be mentioned again.

Paul Kinsey’s return was heart-crushing. Ever the poseur, he looked like a pastel-yellow Kirby in his Hare Krishna garb. Let’s talk about Lakshmi (Anna Wood). Paul’s opportunistic lady friend with the Juliette Lewis hair and psycho stare lacked depth but brought plenty of sizzle to the reunion of kindred schmoes Harry and Paul. Poor Paul is just not any good at writing, no matter how he refashions himself. He’s neurotic without any of the consolation prizes that can accompany neurosis: a sharp wit or a keen ear. Whereas Ken Cosgrove is blessed with a wealth of talents, Paul has nothing at all. He can’t hold down a job at SCDP or the A&P. He even gets bested by Harry at Kirtan.

Roger apparently knows he is the father of Joan’s baby and thinks Pearl Harbor was “an act of genius” in the manner of Damien Hirst’s comments about 9/11 being “visually stunning” and “an artwork in its own right.” Those who ride the executive elevator are impressed by anything that obviously cost a lot, even when the cost is human life. Joan doesn’t want Roger’s money because she doesn’t want to owe him squat. If Roger knows he’s the father, does that mean anyone else knows? Does Don? Or is Roger’s loyalty ultimately to Joan above Don, even though normally Sterling loyalties are almost always to himself above all else?

The Yellow Kid (a.k.a. Paul Kinsey) spins a story about his many failures. Harry was never gullible enough to think Paul wasn’t going to ask him for something; he just couldn’t predict exactly what it would be. No longer harboring fantasies of being Orson Welles, Paul now sees himself as a disciple of New Wave science fiction. If he’d heard about Kenny Cosgrove’s story in Galaxy his head would have likely blown up. As chill as he wishes he were, Paul is naturally obsessive. We don’t know exactly what he means about having “degraded himself,” just that he was kicked around every agency in New York and desperately needs good ol’ pal Harry to read his Star Trek spec script. Paul, looking just like sad Charlie Brown, knows he is doomed to be last pick in any sport he plays.

Don doesn’t like what experimental theater has to say about advertising. It’s not that he disagrees with their right to denounce his living, it’s just that the delivery is so heavy-handed and the method so self-congratulatory. As far as Don can tell, the complaints of the young are nothing new, and most of the acid-dropping rebels currently testing their boundaries will renounce free love and end up with suburban mortgages soon enough. Don doesn’t feel like taking Megan to Jaguar because he knows she’s no longer up for automatically playing the doting wife on command. Joan Holloway, furious at being served with divorce papers and starving for the type of admiring male attention she once had in droves, is more than up for it.

Don, no stranger to ridiculous temper tantrums motivated by frustration and sadness, knows that he and Joan will make the best fake couple ever at the car dealership. They have the natural rapport of people who have known each other for years and wanted to have sex for just as long. While they are clearly equals in sexual prowess and slick put-downs, they’ve managed to go this long without racking up any weirdness or bitterness between them, navigating prior drunk situations just fine. Oh well, YOLO! Megan has only known her husband since 1965, but Joan knew Don when he was young and unbounded. She witnessed the metamorphosing of Dick Whitman into the sleek, successful creature he became, and has an affectionate knowledge of both. Joan’s sexuality is not compulsive the way Don’s can be. She isn’t compelled to screw every attractive man in sight. Only specific ones, and then to the wall.

Driving the E-Type might not do much for Don at first, but writing the check to buy it sure does. Don and Joan enjoy the feel of power, and being around each other is a reminder of how much younger and stupidly self-assured they both used to be. Aging hasn’t really mellowed their desires (or hotness, for that matter), but they recognize that their lives have changed significantly and aren’t endless. “Remember when” may be the lowest form of conversation, but it has undeniable romance. Don’s quip about the onetime stream of flowers to Joan’s desk being from Prince Ali Khan dates him, as the Prince’s marriage to famous redhead Rita Hayworth was over by 1953. Don tries to cock-block himself by acting like Joan’s girlfriend, pointing out a guy at the bar she should pick up and telling her she’ll meet someone better than Greg.

Don and Joan drink while Joan DJs nostalgic holiday tunes on the jukebox. “Look at all these people dancing to my music,” she says. Joan loves to be loved, and if no one in particular is available, everyone will have to do. They are at a location I recognize as an L.A. bar called The Prince in Koreatown, which first showed up in Mad Men‘s first season as an after-work midtown bar. Don gets drunk enough to tell Joan that the office men were terrified of her at first and thought she was a lesbian, then Joan gets drunk enough to make a low-key play for Don. I mean, why the hell not? She’s a lonely ginger on Christmas. Don politely declines, but suddenly understands the appeal of the E-Type’s manual transmission, soft leather upholstery, and independent coil spring rear suspension.

Lakshmi shows up in Harry’s office and says, “The first time we fuck I might scare you a little, because I’m a Hare Krishna and I know how to do Bhakti yoga.” Lakshmi is a whackjob, and not the fun kind. She is indeed the world’s shittiest girlfriend, and possibly also the world’s worst blackmailer. When she slapped Harry for pointing out that she gave him the ill na na for free, I got serious Nomi Malone vibes. Speaking of crazy-eyed brunettes, Megan is seriously pissed that Don disappeared. He tried to turn it into a floor-sex fight, but she’s not here for that. Megan may have recognized the possibility that leaving her job might make Don look for another “office wife,” but she probably didn’t figure it’d be so fast.

Paul Kinsey, still looking like Vincent D’Onofrio in Full Metal Jacket crossed with a buttercup baby, gets talked into moving to Los Angeles by a pitifully kind Harry Crane. Harry gives Paul advice similar to what Don told Peggy in Season 1; move on and everything bad that ever happened will be a distant memory. If Kinsey can really close as well as Lakshmi says, maybe he’ll find his calling in Los Angeles as an agent doing poolside business in a ’60s version of Entourage. Maybe he’ll end up writing porn. It is not within Harry to disabuse Paul of his notion that he is skilled, or to tell him that his girlfriend is genuinely a whore and not just literally a former prostitute. This whole episode was driven by moments of indirectness. Paul and Harry’s parting hug made me feel more for both of those characters than I ever have.

Pete is disappointed that nobody is excited he got Sterling Cooper Draper Pryce back in the running for Jaguar. He wants a nice pat on the back from absent father figure Don, not realizing that Don is competitive with his juniors about who gets the most time in the company spotlight. Pete is always disappointed about something, except when he’s biting into a morning doughnut. Don bounced back from last week’s cringe-worthy devil-voice pitch with a rousing Coach Taylor speech about getting ready to “drown in champagne” to kick off the SCDP Christmas party. Don campaigns best when he’s selling himself for the job he already has. Lane exhales a little sigh, because surely no one will ever find out about the forged check. Who will kiss on New Year’s Eve? Joan and Don? Don and Pete? Pete and Roger? Joan and Roger? Joan and Megan? All of the above and Bert?

Songs of the Week: Goodie Mob Talks to God, Beach House Gets Ripped Off, and Mystikal Is Old

Game of Thrones Season 2, Episode 8: 'The Prince of Winterfell'