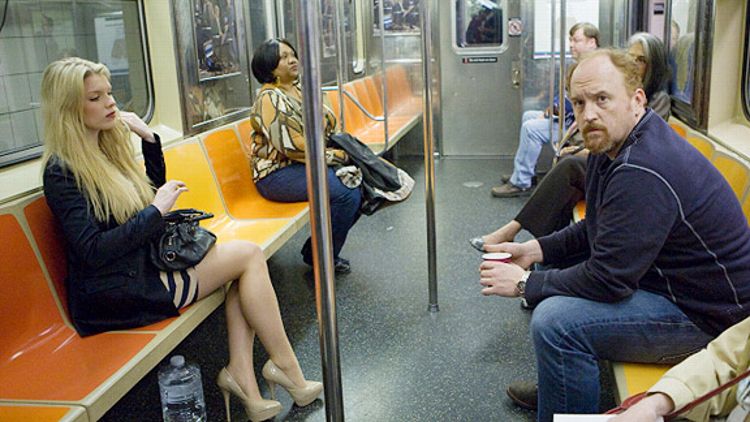 Last week’s episode of Louie opened with a quasi simulation of his failed HBO show Lucky Louie, punctuated by Louis C.K. wearing a backward baseball cap and destroying the concept (and his hypothetical career) by questioning the realism of what they were doing. For maybe 90 seconds I found myself thinking, “Goddammit, here we go. This is it. This is going to be the first bad episode of Louie, because he’s going to obsess over something that’s essential only to him and not especially new and not even accurate (because the show he seemed to be satirizing wasn’t how Lucky Louie actually was).”

And then — of course — the episode changed. It didn’t just become unbad; it became incredible. The more I think about it, the more I suspect the interaction with Dane Cook might be the strongest seven-minute stretch I’ve ever seen on television: It’s realer than any reality show, more emotionally complicated than most 300-page memoirs, yet still awkward and severe and (somehow) easy to watch. I want to know everything about this scene — I want to know if this conversation truly happened, I want to know Cook’s views on his involvement, and I want to know C.K.’s deeper intent. And I can tell I’m not the only one who feels this way. What’s so distinctly compelling about this season of Louie is how everyone seems to collectively realize that what C.K. is doing is not only cool, but also authentically artful and unnaturally profound. There’s no debate over its value because there’s no contradictory position to take. It’s not polarizing in any important way: If you’re watching this show, you intuitively know it’s fantastic (and substantially unlike the way fantastic TV typically is).

This fall marks the 20th anniversary of Nirvana’s Nevermind, so lots of folks are talking and writing about how life-changing the release of that record was. But in 1991, Nevermind was not unilaterally appreciated — people argued about its merits constantly, and a lot of people hated it. We generally agree it’s awesome now, but that agreement is retrospective. Louie is not like that. Right now, Louie is like the Beatles in ’66, or maybe Joe DiMaggio in ’41. These half-hour explorations are not just deftly written, but formally inventive — the episode in which his racist aunt dies is structured unlike any American situation comedy ever produced. The episode from two weeks ago (when Louie explains why he needs to tell the person he loves that he loves her, even though he knows she can’t reciprocate) offhandedly illuminated a paradox I’ve unsuccessfully thought about for more than 20 years. I don’t have kids, but — if I did — I feel like Louie would resonate so deeply I’d almost be afraid of it. The level of insight and weirdness C.K. is jamming into these shows is flat-out unimpeachable, and I somehow get the sense that his entire audience is having the same experience as me. It’s a shared recognition of perfection, happening in the present tense. And this is not a situation like 2003, when everyone just sort of temporarily agreed that “Hey Ya!” was a terrific single; this is different. This is someone working on the most radical edge of mainstream culture and succeeding brilliantly without ever doing the same thing twice. There is no antecedent.

Tonight’s episode of Louie (according to the druid who writes the capsules for the Time Warner on-screen programming guide) is as follows: “Louie explores a lifelong habit.” I have no idea what this means, and perhaps the episode will suck. Maybe that scene with Dane Cook was the apex, and — even though the rest of season will be totally watchable — nothing on Louie will blow my mind again. But I don’t think so. I really don’t. I’ve never had this much confidence in a TV show, ever. This is really happening.

[Readers note: Upon the publication of this post, it was pointed out to me that the show C.K. was satirizing in the open was probably not Lucky Louie, but actually C.K.’s failed 2004 CBS pilot Saint Louie. Which doesn’t change the meaning of what I was arguing, but does make a lot more sense. The error is mine. —Klosterman]