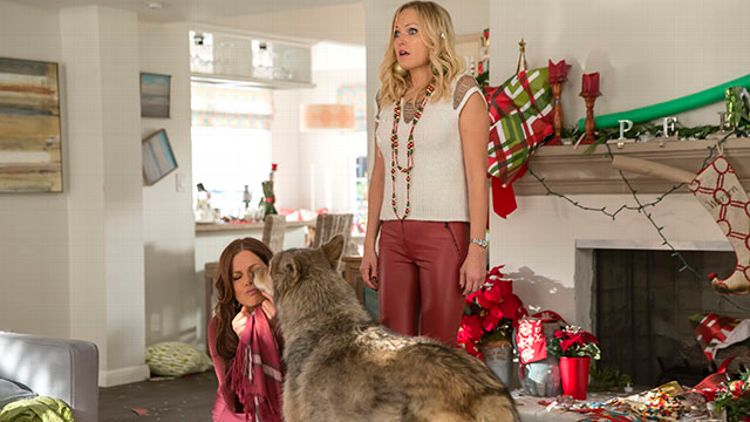 Yesterday, The Hollywood Reporter blew the lid off one of the industry’s most underreported stories: that ABC’s entertainment president Paul Lee is quietly having what could be charitably called a terrible, horrible, no good, very bad year. While Bob Greenblatt, Lee’s counterpart at NBC, hoovers up most of the headlines and negative press (especially from yours truly), the reality is that it’s ABC that’s mired in last place among the broadcast networks for what could end up being the third straight season. (ABC, like Grantland, is owned by the Walt Disney Company.) As THR points out, Lee’s few bright spots are dimming rapidly: Dancing With the Stars, Revenge, Nashville, and Once Upon a Time are all down precipitously from previous highs. And there’s very little to take their place, thanks to two seasons of DOA clunkers like 666 Park Avenue, Betrayal, and Lucky 7 — the latter a show so clearly designed without the slightest sense of a potential audience that even its stars seem slightly embarrassed to be there.

Bad as this situation is, it’s worth addressing the peacock in the room. Namely, if ABC is in such dire straits, why do NBC’s struggles still get most of the attention? It’s partly a question of scale: NBC has been nose-diving for more than a decade while ABC is still just a few years removed from its Lost/Desperate Housewives heyday. But it’s also a matter of style. Outside of the apocalyptically awful Work It, Lee’s failures have been relatively modest, a politely British stream of forgettable badness. Greenblatt, by way of comparison, is a disaster artist of the first order, a man who inherited lemons and has spent three seasons transforming them into … moldy lemons. Consider, if you will: the tanking of Thursday nights, Smash getting smushed, the quick, inevitable passing of Do No Harm, Whitney, Ironside, 1600 Penn, and Are You There, Chelsea? from the schedule to the Hall of Shame. This is a man who green-lit six episodes of a Dane Cook sitcom and then cancelled it before ever putting it on the air — and, before last week’s surprising Sound of Music success, that money-hemorrhaging reversal was in the running for the savviest programming decision he’d ever made.

The biggest separation between the plights of ABC and NBC, though, is the simple matter of scripted hits. Which is to say, ABC has some. And NBC has one: The Blacklist, a problematic procedural that may find itself in a world of hurt once the twin pillars of the NFL and The Voice vanish next month. ABC’s splashy Agents of S.H.I.E.L.D. might not be working creatively, but it’s doing OK commercially. (THR points out that it’s holding steady as TV’s no. 5 show among the coveted 18- to 49-year-old demographic.) And Lee still has two big chips in his pocket, the Emmy-gobbling Modern Family and the Twitter-strafing Scandal. The most interesting part of the THR piece wasn’t so much Lee’s struggles to repeat the outsize ratings of those two shows as much as it was about his inability to use their twin success to launch new series or, at the very least, stabilize a night.

Leaving Scandal aside for another time — call me sentimental, but I struggle with dental-extraction torture around the holidays — the real shonda (as in shame, not Rhimes) is on the comedy side. In its fifth season, Modern Family remains a giant, honking hit; it’s a throwback to the golden days of network TV when a single show could draw a strong, steady coalition audience of the youngs, the olds, and everyone in between. Though the importance of old-fashioned nightly schedule-building has been diminished in the DVR age, lead-ins still matter — particularly in the DVR age when quivering baby shows need all the help they can get. So it is both preposterous and incomprehensible that Lee hasn’t been able to establish a single new comedy in Modern Family’s prodigious wake. Instead of being a launching pad, Wednesday at 9:30 p.m. has become a graveyard. If you listen closely, you can still hear the ghosts of Happy Endings, Don’t Trust the B in Apartment 23, and How to Live With Your Parents (For the Rest of Your Life) howling. (I think they’re mostly complaining about what has become of Julie Bowen’s Claire.) The Neighbors, last year’s beneficiary of the Dunphy family’s largesse, is quietly playing out the string on Friday nights. This year’s occupant, the dreadful Super Fun Night, is close to flatlining.

Look, I’m no programming executive. I don’t know all the specifics involved. But wouldn’t it make sense for the show that airs after America’s favorite family comedy to be, I don’t know, just the slightest bit complementary? No one was a bigger fan of Happy Endings than I was, but its hyperactive, youth-skewing clusterbomb approach to laughs was always a bad match with Modern Family — despite the title and Mitch and Cam, the show is wildly traditional. The effect was like chasing a glass of Merlot with a flaming jager shot — or better yet, a whore’s bath. And yet, Lee is still tinkering around behind the bar. In February, he’s planning on using the 9:30 Wednesday slot to debut Mixology, a not-great-looking sitcom from Ryan Seacrest and the writers of The Hangover aimed squarely at the Happy Endings demographic. The best-case scenario here is … what, exactly? That Family-friendly audiences will fall hard for a lesser version of the actually funny show they’ve already rejected? This is the blinkered thinking of someone who should have been cut off long ago.

What’s especially galling is that ABC actually has the next great family sitcom already on its air. In its short life, Trophy Wife has already triumphed over a lousy title, a dubious concept, and an impossible time slot (Tuesdays at 9:30 with fellow struggling freshman The Goldbergs as a lead-in) to emerge as the best new comedy of the fall. Originally developed as a starring vehicle for pratfalling charmer Malin Akerman, the show almost immediately evolved into a delightful ensemble piece. Akerman, as the titular spouse, actually shines brighter thanks to the shared spotlight. Bradley Whitford, as her lawyer husband, hasn’t been this good since the Bartlet administration, and Marcia Gay Harden (as the stern ex-wife no. 1) and Michaela Watkins (as the loopy ex-wife no. 2) are both extraordinary. Trophy Wife is the rare contemporary sitcom that utterly eschews mean-spiritedness. It radiates such coziness and good cheer that it allows for occasionally spotty jokes and heavy leaning on cute kids for easy punch lines. (It helps when said cute kid is the peerless Albert Tsai.) Last week’s Christmas episode, “Twas the Night Before Christmas … or Twas It?” was particularly fine as the mushed-up Harrison clan woke up on December 25 with the tree in the pool, a coyote wandering the living room, and a matching set of brutal absinthe hangovers. I love the way the show explores not just the expected divide between adults and kids but the varying gradations of what it means to be an adult. Even the most straitlaced professionals have opium-smoking skeletons in their closet, and the line between maturity and eyebrow-shaving can be washed away in a few glasses of glogg.

Trophy Wife has unforunately low ratings but a higher ceiling than anything else currently on ABC’s schedule. The network did give it a vote of confidence in the form of a full-season order, but the truth is that the show’s long-term prospects are very much in doubt unless Lee reshuffles his priorities. Pairing Trophy Wife with Modern Family makes sense for all involved: Not only do the shows fit together perfectly, but it would also be a tacit admission that ABC’s comedy brand is inclusive warmth, not millennial sass. (Leave that to the professionals over at Fox.) It may not be the bawdy, youthful network Lee wants, but judging by the ratings of Don’t Trust the B and Super Fun Night, he’s the only one who wants it. This holiday season, it’s worth remembering one thing: 'Tis a far greater offense to give up on an existing show than to receive the false hope that comes with starting over, yet again, from scratch.