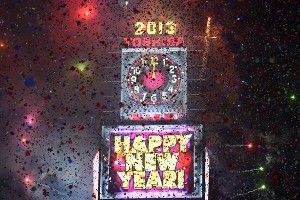 Did your New Year’s Eve, once again and despite your best intentions and well-laid plans, end in misery, shame, panic, regret, tears, minor bruising, and an Angry Whopper Jr. for breakfast? Don’t even worry about it! Local L.A. TV station KDOC attempted its first ever live NYE broadcast on Monday. And it turned into a glorious, shining beacon of a shit show, one that’ll immediately make you feel better by comparison.

It was Patton Oswalt who brought this important happening to the world’s attention, by Tweeting out a worst-of reel of KDOC’s night of infamy earlier this morning: “Sweet. Jesus. KDOC Channel 56’s live 2012 New Year’s Eve broadcast. Does ANYONE have the full show? I am speechless.” The clip was put together by YouTuber BlackDudeWhiteChick, who writes “On 12/31/2012, KDOC in LA aired a LIVE (NO DELAY) New Year’s Eve show. ALL of the F-bombs, audio and video glitches, awkward pauses and drunk teleprompter mimics are 100% how the show aired. No tape doctoring necessary. Enjoy what probably is the last time KDOC will ever do anything live ever again … they filled 90 minutes with Jamie Kennedy, a clearly high Macy Gray, and Bone Thugs N’ Harmony who didn’t get the memo not to curse. ENJOY.”

Now while we’d argue the splendor of Bone Thugs cancels out the turgidness of Jamie Kennedy, leaving that performer list as more or less a wash, this really is a sight to behold. If you’re still having NYE PTSD about making out with that guy dressed like the Philly Phanatic or whatever, relax, hit play, and enjoy the relative cleansing power of KDOC’s last night of 2012.